First, a quick note: this series of posts about S. M. Stirling’s Emberverse novels contain spoilers. While they are dubbed reviews, they are not particularly review-ish. However, should the posts encourage new readers to read Stirling’s Emberverse, the more the merrier, and enjoy — but beware, for here there be spoilers.

I discuss book 1 of the Emberverse series, Dies the Fire, here, and Book 2, The Protector’s War, here.

Series fiction obeys different rules than trilogies (why trilogies? A paper shortage in England in the mid 1950’s led to a certain book being published as a trilogy…) or standalone novels. Stirling’s A Meeting at Corvallis is, structurally, the second half of a duology on the one hand and the third novel in the Emberverse on the other.

Before the opening battles of the Protector’s War, Stirling provides some thrilling black ops (medieval-style) action. An embarrassment to the PPA (Portland Protective Association) needs to be eliminated before he can testify to the leaders of Corvallis, for if he and his crimes are shown in public, Corvallis public sentiment may swing against the PPA.

Sandra Arminger swings into action, arriving in state to handle the crisis, and her assistant Tiphaine Rutherton dresses all in black and slinks into the night. The good guys are on guard, though, and Tiphaine, later dubbed “Lady D’ath,” (hint, hint) is apparently caught in the act of disposing of the embarrassing PPA lord before he can be displayed to the people of Corvallis.

Here’s a lengthy quote to set the stage.

A head rose, a man standing on the stairs. Blond, sharp-featured; enough like her to be her brother, ironically enough. No way back. Decision and action followed together; she closed her eyes to get the advantage of a crucial second’s adjustment, whirled, kicked over the lamp and leapt forward over his head as it winked out. Darkness descended, not absolute but shocking to anyone expecting the light to continue. In midair she twisted and drew her legs up, and landed in a crouch behind him; wood rapped painfully against her shin, but she didn’t fall. Instead she was in a perfect three-point stance, two feet and left hand supporting her, the right fist curled back to her ear.

The narrow confines of the stairwell trapped the man above her for an instant. In that instant she struck, hammering a knuckle into the inside of his thigh where it would paralyze the muscle. The leg buckled under him. Tiphaine slapped both her hands down on the wood of the stair as he fell and struck out behind her with both feet, a mule-kick at the shadowy figure behind her at the bottom of the stairs, lashing out with all the strength of her long, hard-muscled legs.

Surprise almost slowed her as the half-seen opponent managed to get forearms up for a cross-block, riding the bone-shattering force of the blow backward, falling to the asphalt floor of the warehouse.

Fast, that one. Be careful!

Tiphaine let her feet fall back just in time for the man she’d leg-punched to topple back on top of her. The weight drove an ufffff! from between her teeth, but she made her arms and legs springs to push back at him, tossing him headforemost with his spine to the stairs. With a strangled yell he went hurtling down the stairs behind her, even as she turned and crouched and leapt again; he landed hard, and yelled again, this time in pain.

The ground floor of the warehouse gave her space to move. The man was tangled up with the one she’d kicked. A corner of her mind registered moon-pale hair: Astrid Larsson. The door was temptingly open —

Instead she turned and ran down an alleyway between towering piles of full, sixty-pound sacks of oats, the layout flashing through her mind as she moved. A deep bass voice swore outside the doorway, and the floor thudded as a man came through; he’d been waiting outside. John Hordle. Every bit as big as she remembered him but astonishingly quick, right on her heels. If those hands closed on her, she was doomed. It would be like trying to fight a grizzly.

She sprang again, landed halfway up a fourteen-foot stack of bagged grain and scrambled to the top like a squirrel running up a tree. Across the top of it, slippery burlap moving beneath the soft gripping soles of her boots. The whole stack thudded and shivered under her as Hordle’s massive weight slammed into it without slowing, then started to topple towards the wall in an avalanche that could shatter bones and kill. Desperate, Tiphaine let that fling her towards the window there, launching herself out with her arms crossed before her face.

Glass shattered, and the thin laths broke and twisted. Tiphaine’s belly drew up of itself — she had a fifty-fifty chance of carving her own guts out and spilling them on the ground, with a crazy stunt like this.

Then she was rolling on the asphalt in the cold darkness; only superficial cuts. They stung, but no tendons were severed, no muscle deeply gashed. Rolling, up on her feet again, and another figure was coming around the corner of the warehouse, clearing a stack of boxes with a raking stride and landing smoothly, beautifully fluent. A woman, as tall as she, black hair — Eilir Mackenzie. The others would be seconds behind her.

Tiphaine turned and leapt again, her foot hitting the top of a wheelbarrow leaned against the cinderblock outer wall of the Hatfield property and giving her a brace for another scrabbling jump. The top of the wall had a coil of barbed wire on it, bad but better than spikes or broken glass. She grabbed, heedless of the sharp iron punching into her palms, wrenched, pulled, flung her body up sideways and rolled across it, pulling with desperate strength as cloth and skin tore. 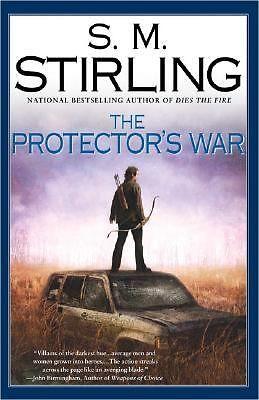 Yet another wonderful hybrid of the real and the romantic. Ninja action — “real” Ninja action — all speed and movement. No cinematic extended battle scenes with crews of black-clad, sword-armed warriors. Just one finely trained, extremely smart foe, focused on her mission — not only to eliminate her target, but to get away without being caught.

In the end, accusations against the PPA fly, but evidence is scant. The city leaders remain neutral.

Unencumbered by an embarrassing political scene, the PPA launches its war of conquest in two campaigns of armed might. One early in the growing season features the complex opening moves of Arminger’s plan to Have it All. The Lord Protector of the Portland Protective Association (“protective” in the sense “best pay up, otherwise something might get broke, like”) begins his war with a complicated series of moves meant to expand his realm. He commands superior numbers of full-time troops, but as a former professor of history (he gets his Normanism honestly) he may be fully capable of getting feudalism going (along with collars for the serfs), but he’s no military genius.

The good guys take advantage of the PPA’s unfocused war plan, win several smaller battles and manage a standoff at the key point of attack, thanks to further political maneuvering that enables reinforcements from the Corvallis city-state to make it to the battlefield in time.

What scene of thrilling battle to share? A Dunedain ambush? Mackenzie arrowstorm vs. mounted knights? Pikes vs. charging knights? I think instead a scene of what passes for “high tech” warfare after the Change:

Ken Larsson ducked involuntarily as the metal bolts from the war-boat flicked towards him, mere blurred streaks at better than four hundred feet a second. They struck the row of heavy sheet-metal-and-timber shields his crew had rigged along the northern edge of the railway bridge. The sloping surface shed the impact with a tooth-gritting sound halfway between a bang and a squeal; the bolts flickered and tumbled upward, still moving so quickly they were barely visible, leaving an elongated, dimpled dent in the quarter-inch steel.

Ouch, Larsson thought. Glad I thought of the shields and didn’t just rely on the ones on the engines themselves. The nearest of the turtle boats was well under a thousand yards away now; they were coming on in a blunt wedge, slowly, no more than walking pace — probably because they’d diverted the power of the pedals to the weapons rather than the propellers. The open hatch snapped down again as he watched, and he turned to one of the engines mounted on the railway cars.

“They’re probably too far away for our bolts to penetrate yet,” he said. “Let’s see how good their sealing is. Number Three, let ’em have it.”

The catapult crew nodded, and two of them used a scissorslike clamp to raise a big ceramic sphere into the metal throwing cup. Its coarse clay surface had an oily, glistening sheen to it, and the sharp petroleum stink of the gooey stuff oozing through the thick pottery was pungent enough to carry several yards. Firebombs of this size were kept empty, and filled from steel barrels only a few minutes before action. Ken repressed an impulse to step back; there were fifteen gallons of the stuff in there, and sometimes — not often, but every once in a while — ‘the container shattered when the machine cut loose, with very nasty consequences….

Ken Larsson, the father of Signe, Mike Havel’s spouse, was an engineer before the Change and leads the crews of the cutting edge post-Change artillery battery holding a key bridge. Horses on treadmills tighten springs, storing muscle power used to launch missiles at the enemy turtle boats (Arminger’s engineers (heart) Admiral Yi Sun-sin). These boats are crewed by people pedalling furiously to operate screws for propulsion and to tighten springs for the launching of their own projectiles.

Stirling’s essentially science-fictional recreation of medieval warfare relies on in-depth cause and effect analysis of how such warfare would be conducted differently after the Change. These spring-powered artillery units are just one consequence. Yet the essential need to plant and harvest crops can’t be waved away.

The spring engagement with the enemy is a draw. Political chicanery aside, volunteer troops from the city-state of Corvallis show up in time to face down the Protector’s forces; that, along with reverses in other areas, forces the Protector to pull back and regroup.

The good guys get the summer to grow crops, train, harvest crops… knowing full well the PPA will no doubt take advantage of the fall campaign season to try, try again. Well, since Arminger selected the Eye of Sauron as his symbol and flag, what else would he do?

Check back here next week for part 2 of A Meeting in Corvallis.

[…] Emberverse: Dies the Fire, The Protector’s War, and A Meeting in Corvallis (blogged in Part 1 and Part 2!) Before moving on to the next book in the series, The Sunrise Lands, let’s take a […]