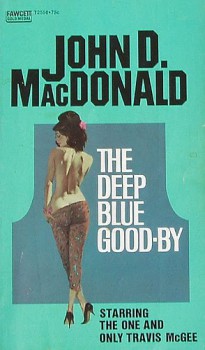 I’ve recently gotten hooked on the Travis McGee novels of John D. MacDonald (1916-1986), reading The Deep Blue Good-by (1964) and Nightmare in Pink (1964) in quick succession. I’m stoked that there are 19 McGee novels awaiting me, but I can already make one salient observation about the main character based on these first two outings: he has the mind of a science-fiction writer. I was not surprised at all, in fact, to learn that several of his creator’s early stories and novels were science fiction.

McGee is a “salvage consultant”: basically, he’s an unemployed (by choice) beach-bum who makes his home on the Busted Flush, a 52-foot houseboat he won in a poker game, which is mostly docked in slip F-18 at Bahia Mar (a site about as well-known to crime-fiction fans as 221B Baker Street). When the funds get low, he takes on a case. He’s a cynical guy; he doesn’t want to get emotionally involved with people, but the problem is he does have a strong sense of honor and integrity (much to his own chagrin, since he sees this sort of romantic chivalry as woefully outdated). So he does invariably get involved and, well, I’ll let him speak for himself: “This emotional obligation did not fit me. I felt awkward in the uncomfortable role. I wished to be purely McGee, that pale-eyed, wire-haired girl-finder, that big shambling brown boat-bum who walks beaches, slays small fierce fish, busts minor icons, argues, smiles and disbelieves, that knuckly scar-tissued reject from a structured society, who waits until the money gets low, and then goes out and takes it from the taker, keeps half, and gives the rest back to the innocent.”

He’s an introspective guy, somewhat philosophical in his rejection of industrialized urban society, and for a narrator delivering page-turner suspense, he often digresses into ruminations about society’s failings and his own shortcomings and disillusionment. Far from bogging the story down, these imaginative digressions have made McGee one of the most memorable and celebrated characters in twentieth-century American fiction. And in his creative metaphors, he shows a strong streak of the dystopian mind.

To illustrate, here are two passages from the second McGee novel, Nightmare in Pink. 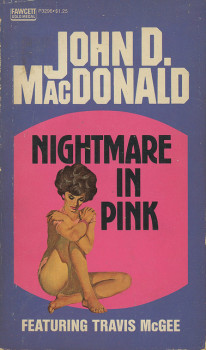 Both are delivered back-to-back shortly after McGee has left the comfort of his relatively secluded life in the Florida yacht basin to come to New York:

New York is where it is going to begin, I think. You can see it coming. The insect experts have learned how it works with locusts. Until locust population reaches a certain density, they all act like any grasshoppers. When the critical point is reached, they turn savage and swarm, and try to eat the world. We’re nearing a critical point. One day soon two strangers will bump into each other at high noon in the middle of New York. But this time they won’t snarl and go on. They will stop and stare and then leap at each others’ throats in a dreadful silence. The infection will spread outward from that point. Old ladies will crack skulls with their deadly handbags. Cars will plunge down the crowded sidewalks. Drivers will be torn out of their cars and stomped. It will spread to all the huge cities of the world, and by dawn of the next day there will be a horrid silence of sprawled bodies and tumbled vehicles, gutted buildings and a few wisps of smoke. And through that silence will prowl a few, a very few of the most powerful ones, ragged and bloody, slowly tracking each other down.

Not far from that to imagining 28 Days Later or World War Z.

I frowned at my sound-proofed ceiling and thought how they could improve the hotel service. Make the rounds — manager, technician and chambermaid. Are you happy enough, sir? Not quite. Gather around the bed, open the little compartment in the headboard, pull out the joy tubes and slip them into the veins, unreel the joy wires and needle them into the happy-making part of the brain. Adjust the volume. Is that better, sir? Enormously. When are you leaving us, sir? Turn me off next Tuesday. Thank you, sir. Enjoy your stay in New York, sir. Happy hallucinations.

Seems McGee was presaging a bit of cyberpunk there.

That’s all I wanted to bring up here about the McGee novels. I could add that MacDonald is one helluva writer, but far more heavyweight authorities than me have already been saying that for years.

Great to see somebody else at BG writing about MacDonald, my favorite author. He did start out as a sci-fi writer, penning 50 short stories and 4 novels before moving on to the mystery/thriller field.

MacDonald was (and still is) a first class social commentator; not just with his McGee books.

His The Girl, The Gold Watch and Everything (a tv movie with Pam Dawber and Robert Hays) is great campy low-tech sci/fi.

I could gush over MacDonald in post after post. Of the many books I recommend, you might give ‘Where is Janice Gantry’ a read. It’s basically a dry run at developing McGee. You can see he’s working on the idea of the beach bum, worn out knight type.

I devoured this entire series after discovering it in the late series. When I tried to reread them around 1995, I had a lot of trouble with them until I made a conscious effort to see them as “period pieces”. They are wonderful stuff…

(I do wish Trav wasn’t quite so much the near-magical sexual healer of emotionally damaged women though. And I REALLY wish those same women didn’t almost always have cutesy names like Midgie or Bitsy.)

Thanks for the recommendations!

Rick said: “I do wish Trav wasn’t quite so much the near-magical sexual healer of emotionally damaged women though.”

So that’s a recurring character trait throughout the series? It does seem to sum up his relationships in the first two books.

Nick – a short blog post I did that highlighted MacDonald’s commentary skills in ‘Judge Me Not.’ His stuff is rife with it.

I read and kept these books back in the 70s while stationed at Grand Forks AFB North Dakota and had a lot of time on my hands. Favorite is Bright Orange for the Shroud which unfortunately becomes almost a template for the villians in the latter books. Lee Gild (author of the Jack Reacher series credits MacDonald with helping him become the writer he is when he decided he wanted to create an ongoing character. with great respect I think the series held yp to about The Green Ripper then a sense of running in place kicks in. Just saying. I also love the Matt Helm and Quiller novels and they too start to wind down–the curse of an ongoing series. MacDonald set a high standard which is rarely matched it seems these days. Glad he hasn’t bene forgotten. There was a reprint series about ten years or so back but the covers were horrid and I sill have my Fawcetts after all these years.

As a woman, I have less trouble with MacDonald’s female characters and Travis’ reactions to them than you might suppose. As Rick suggested, you do have to see them in their cultural context. And, viewed in that context, MacDonald’s depictions are, on the whole, remarkably pro-feminist.

Most of his female characters are strong, intelligent survivors, given what they have to deal with, and what they have to survive. Sure, some are idiots, and some are evil, but the very fact that there is such a range of types in his novels demonstrates that he’s being somewhat equal-handed in his portrayals.

Thanks for the link. I just posted that passage to my Facebook page, with the comment: “Every person entering public office should be made to read this passage, and then to read it again at the start of each new term.”

We’re all about the covers here at Black Gate! I agree about the older covers being superior. The old Fawcett and Gold Medal covers were wonderful ’60s pulp cheesecake (the sorts of books I’d find on my Granddad’s shelves). The later ones are pretty nondescript and bland (but I guess not as offensive because they don’t feature scantily clad females).

Thanks for your perspective on that issue. Based on having read only the first two books in the series, I would agree with your assessment.

I haven’t read MacDonald, and very much appreciate the recommendation.

A thought on the covers, though: While I recognize the period-piece nostalgia, what these two covers broadcast is a Male Readers Only vibe. I nearly skipped reading the post altogether on the basis of the cover image above the fold. Every time I looked at it, I thought, “The Big Blue Butt.” (It didn’t help that a couple of posts up from here, there’s retro-review with a cover from F&SF featuring a curvy, naked blue woman viewed from behind. Apparently it’s been a good week for nostalgia-inducing Big Blue Butts.)

I would never guess, looking at those covers, at any of the books’ virtues. I’m so glad I kept reading.

Geez, get distracted for a few days by piddly little things like grading finals and turning in grades, and look what I miss.

I’ve read about a third of the McGee books, in order, and have liked all but BRIGHT ORANGE FOR THE SHROUD (sorry, Allard). I’ve got the complete set, so I’ll be reading the rest at some point. And while I agree with Rick about the sexual healer, there’s a lot to be gleaned from these books as well as MacDonald’s other work.

MacDonald came up through the pulps, so he got a lot of practice writing in the early years. His later writing is lean and taut, his dialogue crisp, and his characters sharply drawn. I read him for writing education as much as for enjoyment.

Several of his sf stories were included in THE GREAT SF STORIES series Asimov edited for DAW in the 80s. Now if someone would just issue a comprehensive collection of his short science fiction. Paging Mr. Haffner…

At least part of that is an old saying…

Ahem. Anyway, I found your observation about a “Male Readers Only vibe” to be thought provoking. It got me thinking about the idea of gender “coding.” This gender coding has long existed in publishing: most fantasy, sci-fi, and detective fiction appears to have been marketed with that “Men Only” vibe throughout much of the twentieth century. Likewise, there is gender coding to women: if you see Fabio on the cover, or a Viking prince cradling a woman busting out of her bodice, you get the signal Romance for Women Only.

We all know authors whose work rises above their genre’s demographic boundaries to appeal to a more heterogeneous audience. Perhaps MacDonald is one such: when I linked this post on my Facebook page, I was not surprised at the number of guys who commented that he is one of their favorite authors. I was a little bit surprised to hear from a great aunt that the Travis McGee books are among her favorites. Here MacDonald has bridged both generational and gender gaps!