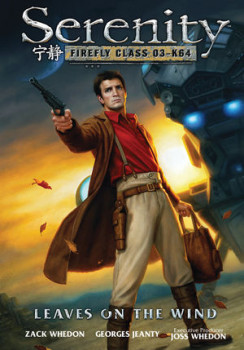 The film Serenity brought a fair amount of closure to fans of Firefly, but as with any great story it didn’t end there. Each character goes through events in the film that transforms them in some way, and the story is never over. The classic hero’s journey ends not with the climactic battle, but with the return. The hero comes back to where he (or she) began and, through the events, has been transformed. Indeed, often their home itself has been transformed in some way, even if only in the way they view it.

The 6-issue limited comic book limited series, now collected together in Serenity: Leaves on the Wind (Amazon) completes the “Return” aspect of the hero’s journey for our crew … and since it’s a story in its own right, it also contains a full journey within it, with a new call to action, a new conflict, a new shift under the feet of the heroes. New allies and enemies are introduced, and the crew continues to change.

The series begins in the aftermath of Serenity, where the revelations about the origins of the Reavers spark heated debate across the ‘Verse. While pundits debate the veracity of the allegations, both the Alliance and a growing New Resistance movement are looking for the man who started it all: Malcolm Reynolds.

Mal is content to hide out with his crew, drifting in a region of space that no one ever bothered to name. He’s likely helped in this contentment by his relationship with Inara. The time between the film and this series is easy to mark, because the tale begins with Zoe giving birth to her daughter, but complications from the birth force the crew to get Zoe to a hospital. Mal must leave Zoe behind in order to keep her newborn and the rest of the crew out of Alliance hands. The primary story arc of the series is their attempt to rescue Zoe, though with numerous distractions and inconveniences along the way.

Joss Whedon has done well for both Buffy: The Vampire Slayer and Angel by creating extended series that continue the stories of those characters, and if Dark Horse comics is looking to do something similar with Serenity, then this series provides an excellent springboard for it. Some of the new characters get far more depth established than they need for the relatively minor roles they play in the story and the series does end with a very clear indication of a new impending threat to the crew. So far as I know, Dark Horse has not announced any plans for a monthly series, but there’s more than enough set up in this series to take the story in new directions if that’s what they wanted to do. And, if not, then it’s just well-established secondary characters.

The hardcover collection concludes with a brief but amusing comic story, “It’s Never Easy,” in which Mal’s attempt to sit out a simple, uncomplicated supply run becomes more complicated than he would have liked.

Finally, the graphics in the book are just stunning. The original issues of the limited series were released with an array of variant covers, all of which are collected together in a gallery at the end of the hardcover, but the art throughout the book is absolutely top notch. I’ll be honest: I am normally fairly unimpressed with the artwork that comes out of Dark Horse. Through the main comics in this volume, though, the artwork is just fantastic. (I’m less impressed by the artwork in the short “It’s Never Easy” story at the end. But it’s short.)

On every level, Serenity: Leaves on the Wind is a first rate story. It’s by far the best of the lot when it comes to Serenity-based comic books,  in part because both the Those Left Behind and Better Days limited series were only three issues long, so this volume has twice as much room to develop the story. Though I enjoyed all the Serenity comics to various degrees, I’d say that this is the only of these comics that is a “must have” for fans. 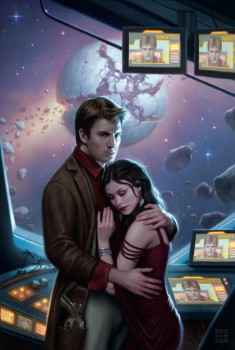