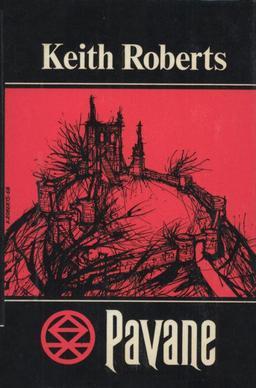 The power of place. Where we’ve been, what we see, the lighting and the weather. These things hold us, sink roots into our nervous system; they unfurl massive Yggdrasils that coil within, then twist into memory.

So it must have been for author Keith Roberts, and his encounters with Corfe Castle, in southwest England. He built his story cycle Pavane around Corfe, almost as an homage.

I understand, I do, for I first saw Corfe – indeed, the only time I have ever seen Corfe – in 1976, in the rain, with my family. I was nine, but I have never forgotten that tusk of a castle, the last spike of it spearing skyward from a sharp, steep hill, the flanks yellow-green with shaggy, unkempt grass. A chain-link fence enclosed the base of the hill, and we could not get in.

My father was furious. Rain and all, he’d had plans to hike us up that hill, to see the ruin for ourselves, up close and appropriately personal. Instead, we never got out of our rented car – it really was the soggiest of days, British to the core — but I see that spike of mortared stone to this day, standing proudly in the storm and refusing, absolutely refusing to come down.

So it is for Keith Roberts, as his stories swirl around and finally come to roost at Corfe, a rebuilt Corfe, a Corfe in an alternate history where the keep’s motte and donjon have stood the test of time, and war now, against mighty odds, with Holy Rome.

A distantly set historical, you ask? No. In Roberts’s England, the great schism comes smack dab in the middle of the twentieth century.

Pavane was never a best-seller, but since 1966 (its initial release) the book has found print again and again and again, achieving the kind of word-of-mouth life about which most books may only dream. 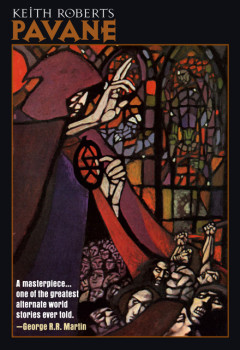 Are Roberts’s difficult, demanding tales worth it? Do the vague hints and dry seeds planted in the first story, “The Lady Margaret,” bear proper fruit by cycle’s end?

Roberts does his world-building through character, zooming in close as any lover and letting us in, by word and by deed, to their innermost, hotly conflicted souls. Then, just when we have fallen in love, he drops the bars – down slams the old portcullis – and drags us, kicking, to the next story, where we find new protagonists waiting (men and women, boys and girls, all ages and stations).

Most of the tales scull hard into time’s swift current, skipping forward a half-generation at least, so that by the book’s close, the world has slid – ever so quietly, like a lethal, inexorable landslide – some fifty years into the future. There’s an ever-present hint that the Old Ones, the faerie folk of ancient times, watch over the proceedings, but readers must wait until the end, at “Corfe Gate,” to divine if such as these are fever-stoked dream-stuff or active participants in the tale.

Corfe Castle itself, the real-life ruin, is now open to the public; the chain-link fence is gone. Its readers are also legion, thanks to Roberts. Luminaries such as Neil Gaiman, Terry Pratchett, S.M. Stirling, Anthony Burgess, and Gardner Dozois line the handsome covers of my Old Earth Books edition, proclaiming Pavane’s worth.

But don’t take their word for it.

Because I remember Corfe.

Our previous coverage of Pavane includes:

Is this the first book to be covered three separate times at Black Gate?

If so, it deserves it. One of my favorite SF novels, in contention for the best Alternate History novel of all time.

I suspect only Mr. O’Neill can answer that question, but if this is to become a competitive field, then I feel very comfortable with entering PAVANE into contention.

Others that deserve more coverage: LITTLE, BIG. And HYPERION.

I recently read Pavane for the first time, in no small part due to a Blackgate post a while back. Mark, every word you wrote is true. I wouldn’t necessarily say Pavane is the “greatest book ever,” but it is great reading. Though much more readable and nowhere near as verbose, for some reason Pavane reminded me of Melvyn Peake’s Gormenghast series; perhaps it was the countryside or the castle, or the great characters. It’s almost as if a British version of the older Mark Twain (if such a person is imaginable), set out to write a tale of a slice of history.

Ty – I’d never heard of PAVANE until John O’Neill mentioned it here, but I’d heard of Keith Roberts. His story “Timothy” is one of my all-time favorites, in any style, in any genre, of any form. It’s contained in the OXFORD BOOK OF FANTASY and I urge all BG readers to seek it out.

Really need to read this. I love three of those covers; the one on the right, um … not so much.