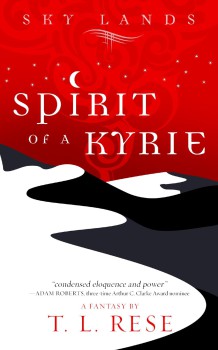 I’ve been at World Fantasy this weekend, and I fell a bit behind in writing this review, so it’s a little later than usual. World Fantasy was great fun, where I had the opportunity to spend some time with some of the esteemed luminaries of Black Gate, including Mike Allen and John O’Neill himself. Nonetheless I apologize for the delay.

This month’s book is Spirit of a Kyrie by T. L. Rese. Kityrah is a young girl with ambitions curtailed by her environment. Growing up poor in the Sallarah Desert during a famine, she and her brothers beg and steal to help their family survive on more than their meagre wolly herd. Her older sister arranges for her to be promised to the son of a wealthy family on the Shores, but Kit is unsatisfied with that life, and instead steals away to seek a new one. Through a combination of ambition and boldness, she manages to join the knights. The story is focused on her rise as a Hopeful for each of the various levels of knighthood, starting with Ash, then Furian, and finally Kyrion. For each level, she must pass a difficult and deadly test, one which most of the Hopefuls fail, many dying in the process.

T. L. Rese’s world is rich and detailed and very different from our own. A lot of the difference is in the little things: Coals that you can carry in your hand or your pocket, but that burst into flame on command. The shape-changing weapons carried by the knights, each class of knight bearing a distinct and lethal set of weapons. The wollies who seem to be dog-and-sheep hybrids, and the fire-breathing eira birds. With so much of the world different, it’s not always clear what you should expect. This is especially true when the descriptions are too spare, and the reader is left puzzling over why things work the way they do, expecting the rules to be the same as those in our world when they are not. In a few places, it sounded like the things Kit was doing were physically impossible, and I couldn’t be sure whether it was just that the world was different.

Kit’s skills are very impressive even from the start. As a young girl, she manages to fight off a large group of White Knights. Those are the lowest ranked knights, but that’s still an incredible feat. Later she makes short work of a group of Ash apprentices, which is what earns her a place among the Hopefuls. If anything, she’s too good: overpowering a score of trained knights and breaking metal chains strains my suspension of disbelief. The things she’s able to do imply supernatural strength and speed. There’s certainly some measure of supernatural power attributed to the knights, but Kit is able to do those things even untrained, against knights who are. It is implied that this is because she is just that innately talented, but at times it seems over the top, and her ability isn’t entirely consistent.

While Kit’s ambition and drive are remarkable, there are times when I found her behavior bordering on amoral. I can overlook the initial thievery, but it disturbed me when she runs from the family whose son she’s promised to, and steals part of their flock and kills their guard animals in the process. The family did not treat her poorly or abuse her; she just decided she didn’t want to stay and saw the opportunity to enrich her own family in the process by stealing some herd animals for them. She then gets into a fight with the Ash apprentices while trying to help an enemy prisoner of war escape. While I could understand why these things were in character for her at the time, I couldn’t see why no one else seemed to have any problem with this. Only later does she begin to show a glimmer of understanding for the knights’ belief in the Honor, but there’s not much explanation of what the Honor actually is or what it requires, which makes me wonder if Kit really knows much about it. It seems like she associates it with courage and ambition rather than doing the right thing. I would like to have seen more of a growing understanding of concepts such as honesty and loyalty. I felt that there were some missed opportunities to force Kit to make some tough decisions, especially at the end, that could have gone a long way to show how much she had changed and grown. Instead, those decisions were made by others, and I got some insight into their character growth rather than Kit’s.

Aside from Kit, the two most important characters were Cyrian, her fellow Hopeful in the Knight Trials and the only person who comes close to rivaling her, and Nadin, the Moreinan prisoner of war whom she tries, and fails, to help escape. Both characters are fascinating. Cyrian is the son of a kyrion, out to prove himself to his father and the princess he’s hopelessly infatuated with. Nadin has resigned himself to his imprisonment, but while he’s a captive, he still manages to have more freedom than his captors realize. Cyrian, the twins Temmy and Remmy, and Byff are Kit’s roommates throughout most of her training, and their friendship does a lot to lighten the mood of the story. The twins, in particular, are fun and irrepressible troublemakers, and provide much of the humor in Kit’s years in training.

The prose worked for the most part. The sentences were usually short, but they flowed together well. However, there were times that the author’s language felt melodramatic: “Thus, Kit pursued her dreams to the tips of the earth, alive in the chase,” for example. This sort of grand declaration was usually out of place amidst the more casual language of the story, but other times the descriptions were especially rich and fitting to the tone of the story.

While the novel isn’t perfect, it tells an engrossing tale of Kit’s progress through the levels of knighthood, improving in her skills and her confidence. I just hope that she’s improved in wisdom as well.