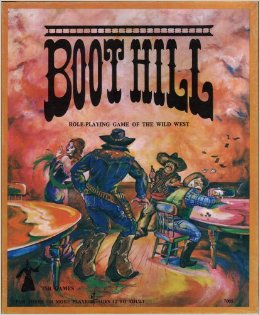 As my children will tell you, a frequent refrain around my house is “I’m so glad I was a kid in the 1970s.” I say it often enough that my teenage daughter – Lord, help her – is starting to wish she’d grown up during the “Me” Decade as well. I could probably write several posts about why I say this and why I say it with conviction, but I’ll spare my readers such blather at this time. However, I will explain how it’s pertinent to the present post.

Television during the 1970s was a funny thing. Outside of “prime time,” first-run programming was broadly limited to game shows, soap operas, news broadcasts, and, of course, Saturday morning cartoons. That left a lot of air time to be filled, which, coupled with new rules passed by the Federal Communications Commission intended to foster the creation of local content (but generally didn’t, at least in my neck of the woods), meant that I saw reruns of many, many old TV shows and almost as many old movies.

Even though I started watching most of this stuff because there was nothing else on, in retrospect, I’m glad that I did so. Not only did it expose me to content, genres, and actors with which I might otherwise have never become familiar, it also provided me with pop cultural connections to my parents, grandparents, and even just the older guys I’d later encounter in the hobby shops. That’s why, to this day, I’m very much a man out of time, with the tastes and interests of the generation before mine, such as my abiding interest in the Second World War. I suspect many of my age peers are similar in this respect.

One of those pop cultural connections to earlier generations was the Western, a genre that had peaked during the 1960s and was well on its way out the door by the time I was born. Yet, thanks to syndication, I got to see plenty of Westerns (as well as shows, like Gunsmoke and Bonanza, which were still being produced in my early childhood). It’s no surprise, then, that, once I discovered roleplaying games, I’d seek out any that recalled the Western TV shows and movies I’d enjoyed. The first – and, as it turned out, only – one I ever played was TSR’s Boot Hill, co-authored by Brian Blume and Gary Gygax.

My friends and I had fun with Boot Hill, which I owned in the second edition boxed set version, first published in April 1979. 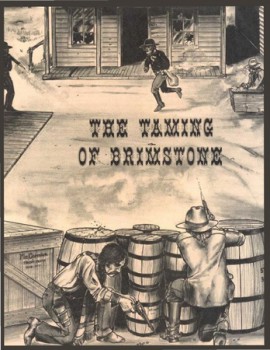 Mostly, we just ran gunfights and saloon brawls, since the game’s rules, which number only 36 pages, slightly more than half of which consist of appendices, were clearly geared for that sort of action. As a kid, I have to admit I was a little bit disappointed in Boot Hill, seeing it as little more than a glorified (if enjoyable) miniatures wargame set in the Wild West. There’s more than a little truth to that assessment, especially if one expects, as I often did as a younger person, that a RPG needs to have explicit rules to handle every important activity in which a character might participate. Judged on that basis, Boot Hill is extremely limited.

Fortunately, I recently had the good fortune to go back and play Boot Hill with my weekly gaming group, consisting of myself, four others, and a very talented referee. A little over a month ago, we started a scenario entitled “The Taming of Brimstone.” The old fogeys amongst us probably recall it as having first appeared in issue #71 (March 1983) of Dragon. I owned that issue, but I don’t recall ever having read the adventure or, if I had, my creeping senility had stolen all recollection of it from my mind. Written by Donald Mumma, “The Taming of Brimstone” concerns a fictional Western town whose fortunes, rather than improving, fell with the arrival of the railroad, as it brought with it all manner of unsavory men to undermine its public order.

Enter the player characters, hired by the town’s elders, to put things right by any means necessary. So it was that my fellow players and I entered the 19th century and took up arms against lawlessness. I played Derek Crane, an untested feller from Back East. Joining him were a motley collection, consisting of “Stray Bullet” Miles (so named after an errant shot in a gunfight mortally wounded one of his companions), “Squirrely” Bill O’Herlihy (a trapper skilled in the use of hatchets and the maker of a mean pot of beans), Matt Pike, and Ezekiah Zachariah “E.Z.” Black. Together, they spent several weeks cleaning up Brimstone, one gunfight at a time – a struggle that ultimately claimed E.Z.’s life in the final showdown.

Just as in the old days of my youth, my friends and I had a lot of fun. I was reminded that Boot Hill is an extremely tight design. Its gunfight and brawling mechanics are easy to use (once you do some initial calculations) and suitably deadly. Derek Crane regularly found himself making good use of cover to keep himself from being plugged full of lead, which is exactly what one ought to do if you don’t want to end up on Boot Hill. Likewise, the experience system is terrific, rewarding survival in increments that are simultaneously large enough to feel satisfying but small enough that characters do not become too skilled too quickly.

It’s true that Boot Hill doesn’t have much else to offer in terms of explicit rules, but we didn’t seem to notice, nor did our referee, who kept things moving despite our occasionally weird digressions (many of them involving “Squirrelly” Bill’s beans). Far from being disappointed, I was frankly amazed at how enjoyable the game was and found myself itching to continue playing, even after we’d set things aright in Brimstone. Like original Dungeons & Dragons, Boot Hill is a game that punches far above its weight class. It’s yet another reminder that there is no better combination than slim rules and imagination when it comes to RPGs. That was true thirty years ago, when I last played Boot Hill, and it’s true today.

Excellent point about TV creating cross-generational connections. Though I am a contemporary of yours, the dress, cars, conventions, and references of the 50’s and 60’s are familiar to me from “I Love Lucy,” “The Twilight Zone,” “Gilligan’s Island,” etc. Extensive reading helped as well, but reading lacks the contextual immediacy of television – the visuals, music, and dialogue providing an immersive composite.

My buddies and I played the heck out of an unholy Boot Hill-Old West hybrid that we cobbled together. We liked Old West, I remember, because of its much more elaborate weapon stats and rules. (I favored Walker Colts, myself. Could Josey Wales lead you wrong?)

[…] Those Thrilling Days of Yesteryear […]