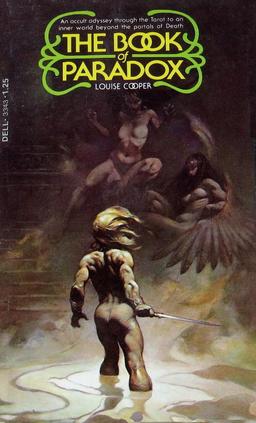 Well, this is a surprise.

A few weeks back, I purchased a collection of vintage paperbacks on eBay for around 50 cents each (the same collection I found Orbit 3 in, which I wrote about on Wednesday.) You never know what you’re going to find in these things, and buried near the bottom of the box was a 1973 sword & sorcery paperback titled The Book of Paradox, with a typically alluring Frazetta cover. I was setting it aside when I caught the author’s name, in tiny print under the title: Louise Cooper.

Wait a minute. Louise Cooper, author of the 12-volume Time Master novels, and the Indigo series? I had no idea she wrote sword & sorcery.

Turns out The Book of Paradox was her first novel. Originally published in hardcover in 1973, when she was just 20 years old, it launched her career. She became a full-time writer in 1977, and in her 30-year career published more than eighty fantasy novels. Looks to me like Dell just had no idea how to categorize her in 1973, so they just threw her in with their S&S line. The book has a fairly typical cover blurb: “An occult odyssey through the Tarot to an inner world beyond the portals of death.” Here’s the back cover text:

A hypnotically fascinating Tarot adventure to a psychedelic nether realm of mysterious fantasy where lies are truths and truths have no meaning… where terror is real and reality is always questionable…and where a valiant hero must become The Fool to succeed on a perilous quest for love through changing worlds of eternal night.

Myth, mystery and magic abound in a mesmerizing novel of considerable imaginative talent.

Louise Cooper died of a brain hemorrhage at the age of 57 in 2009, leaving behind a rich legacy of much-loved fantasy. The Book of Paradox was published in paperback in February 1975 by Dell. It is 236 pages, with a cover price of $1.25. The cover is by Frank Frazetta. It has never been reprinted, and there is no digital edition.

The original Time Master trilogy is, I’m inclined to say, criminally underrated. And as with so many foundational series, I discovered it through a review in Dragon Magazine.

I’ve always wondered what Frazetta originally painted this piece for…all I knew is that it appeared in more than one of my Frazetta art books and was titled “Paradox”. After seeing your piece, John, I popped right over to MegaLoMart–I mean Amazon–and ordered a copy.

It wasn’t just the solving of the Frazetta mystery that inspired me, though–it was that description! “a psychedelic nether realm of mysterious fantasy where lies are truths and truths have no meaning… where terror is real and reality is always questionable…and where a valiant hero must become The Fool to succeed on a perilous quest for love through changing worlds of eternal night.”
I don’t know anything about “The Book of Paradox,” and I’ve never read any Cooper novels. But THAT is the description of a book I m-f’n HAVE to read!
Thanks for the heads-up! And here’s to the days when fantasy adventure paperbacks featured full frontal (and rearward) nudity! FRAZETTA

I hadn’t realized that her TIME MASTER series (The Initiate, The Outcast, The Master, and Lord of No Time) took place in the same setting as so many of her other series — including the CHAOS GATE, STAR SHADOW, and DAUGHTER OF STORMS trilogies.

All of them are currently out of print. I hope that changes soon.

> And as with so many foundational series, I discovered it through a review in Dragon Magazine.

I think most fantasy fans seriously underestimate the importance of DRAGON magazine in the genre. It had the highest circulation of any fantasy magazine in North America for many years – and it introduced a great many gaming fans to fantasy literature for the first time.

> It wasn’t just the solving of the Frazetta mystery that inspired me, though–it was that description!

It’s a gonzo plot description, I’ll give you that! I’m not exactly sure what a “Tarot adventure” is, but I admit I’m curious.

Seeing a standard S&S cover on a Louise Cooper novel makes me a little suspicious the marketing department at Dell had no clue what to do with this book, so I’m more than a little suspect of the blurb copy as well. Still, I haven’t read it…. maybe it IS sword & sorcery.

Let me know what you think when you get your copy!

> And here’s to the days when fantasy adventure paperbacks featured full frontal (and rearward) nudity! FRAZETTA

It is a little strange that today you can get away with content in TV. movies and novels that would probably have gotten you arrested in 1975… but that cover art has gradually become LESS permissive.

Possibly I’m overstating it, and it’s just the case that Frazetta could get away with whatever he wanted. I’ll leave it to those more knowledgeable than I to figure it out.

John: Nudity aside, the number of scantily-clad princesses, queens, slaves, and warrior-maidens found on paperback covers–and comics covers–in the 70s was way up there. I still remember buying SAVAGE SWORD OF CONAN for 1$ and having the Quickie Mart cashier eyeballing me, or actually warning me “This stuff’ll warp yer mind kid.” Which is what my step-dad used to say whenever he didn’t want me to watch BATMAN on TV or any other sci-fi/fantasy related endeavor. Now, some of MY favorite images from the 70s (and early 80s) feature fantasy women in positions of power–giant-killers, monster-slayers–but the fact is that back in the 70s if there was a female on the cover of a fantasy novel she was more than likely being saved by some dashing or barbaric figure. This was the heyday of pop culture sword-and-sorcery. Sex appeal was part of the whole neo-pulp vibe of the genre. This was the decade of HEAVY METAL and Frank Thorne’s x-rated answer to Red Sonja, GHITA OF ALIZAAR, not to mention Richard Corben’s DEN and Jack Katz’s THE FIRST KINGDOM, both of which celebrated the human body in the midst of all the fantasy/sci-fi trappings. Nowadays you put a 70s-style “chainmail bikini chick” on the SFWA Bulletin and start a major sh*tstorm. Times have indeed changed.

The reviews on THIS page go into more detail, and have me aching to read this book more than ever…

It seemed to take forever, but my in-good-shape copy of THE BOOK OF PARADOX finally arrived today! Can’t wait to tear into it this weekend.

Okay, I years behind. Just read this. I was born the year this came out. Too cool for Louise Cooper to get a Frazetta cover on her debut novel. Some of us in the Goodreads S&S group are reading this as part of a “obscure book” groupread. https://www.goodreads.com/topic/show/18674299-july-aug-2017—obscure-books

Thanks for the update. Hope you enjoy it!