You’re just a villager, going about your daily villager-related business. What could possibly go wrong?

How about there being a werewolf secretly hiding in your village?

That’s the premise of the popular game Ultimate Werewolf, designed by Ted Alspach and published by Bezier Games. There are two teams: villagers and werewolves. You get on a team by being randomly dealt cards at the beginning of the game. Everyone sleeps through the “night” and a moderator tells the werewolves to open their eyes. So the werewolves all know who each other are. Then the moderator has everyone open their eyes and wake up for the “day” … and the town debates who to kill. There’s a vote, and whoever gets the most votes dies. Then the village sleeps again, and the next day they vote on another person to kill.

But the village can contain more than merely run-of-the-mill villagers. The Seer, for example, is able to point at one player during the night and be told by the moderator if that player is a werewolf. The Tanner hates his life and wants to die, so he wins if he can get you to kill him. (Screaming “I’m a werewolf!” is not usually a winning strategy for this role. You’ve got to be a little more subtle.)

The current edition of the game produced by Bezier games is actually Ultimate Werewolf Deluxe Edition, which contains dozens of extra roles beyond villagers. In total, the Deluxe Edition can support play with a group of up to 75 players … which is a bit extreme, even for an avid gamer like me, but makes for a great party game, and you can create a set of cards tailored toward the comfort level of the group, to avoid overloading those who might be intimidated by the idea of so many different roles.

For those of us who thrive on diversity, there are also expansions, such as Ultimate Werewolf Artifacts (Amazon), which introduce even more elaborate dynamics into the game. The Artifacts expansion gives players powerful artifacts at the beginning of the game, which they can use later in the game to gain some sort of benefit. The Classic Movie Monsters expansion allows you to be the Blob, Zombies, or Frankenstein’s Monster, each giving new abilities. The full list of expansions can be found at the Bezier Games website.

While Ultimate Werewolf is a great game, there are some elements of the gameplay that make it a challenge. First of all, you need at least 5 players. Second, even if you get enough people to play the game, the elimination aspect of the game means people will be left cooling their heels while the rest of rounds continue until more people get eliminated. It’s great for certain circumstances, but what if you want to play the basic concept, but in a more streamlined fashion? Well, you’re in luck …

The One Night Ultimate Werewolf game uses a similar design, but consists of only a single night. Everyone is assigned a role card, then closes their eyes for the one night round. During that night, players perform actions based on their role, which are modified from how the roles work in the full game. There’s even a free iPad app that narrates the directions to perform nighttime actions, removing the need for one of the players to assume the role of the moderator. Roles such as the Robber and Troublemaker can swap cards, so some players may discover when night ends that they have a different role than the one they began with. The app then counts down the time for discussion and debate, at the end of which everyone votes on who to eliminate. If a werewolf is eliminated, the villagers win. If a villager is eliminated, the werewolf team wins. If the Tanner is eliminated, the Tanner wins. (He really hates his life.)

If you started out as a Villager but wake up as a Werewolf, for example, you missed the round where the werewolves identified each other … so if there’s another werewolf in the game, you don’t know who they are and they don’t know who you are. And the Troublemaker who swapped your cards doesn’t know who either of you are, since they swap cards without looking. Even the Seer may think that you’re the Werewolf, having looked at your card before it got swapped, and trying to protest that you aren’t really a Werewolf anymore … well, that’s exactly the sort of thing that a real Werewolf would say, isn’t it? Get the pitchforks and wolfsbane!

The game can be played in about 10 minutes, with anywhere from 3 to 10 players, so it can make for a great party game on its own, without the elimination aspect of the multi-round structure of the full Ultimate Werewolf game. The game is definitely more satisfying with more players, as the possibilities for intrigue become more involved. It comes with a total of 12 different roles, but if that’s not enough for you, there is still another option … 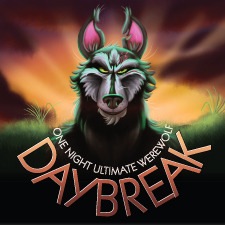 Bezier Games is now running a Kickstarter for their One Night Ultimate Werewolf Daybreak, a sequel to the game that introduces 13 (maybe 14, with pending stretch goals) new roles to the game, as well as a variety of artifacts. It follows the same basic mechanics and can be played either as a standalone game on its own, or by mixing the roles with those from One Night Ultimate Werewolf. The game is essentially guaranteed to fund at this point, having gained over 10 times its target amount and broken through 17 stretch goals already.

The Kickstarter is up on October 28, so as of this writing you have 12 days to get involved. If you don’t have One Night Ultimate Werewolf, you can support the Kickstarter project and get both games as a reward at the $60 level, along with a player mat for the game … or you can also add on Ultimate Werewolf Deluxe Edition (a special Kickstarter edition, with even more roles!) and some expansion packs. If you’re wanting to dive into the world of Ultimate Werewolf, this is definitely going to give you the complete package.

Disclaimer: Review copy of One Night Ultimate Werewolf was provided by the manufacturer.