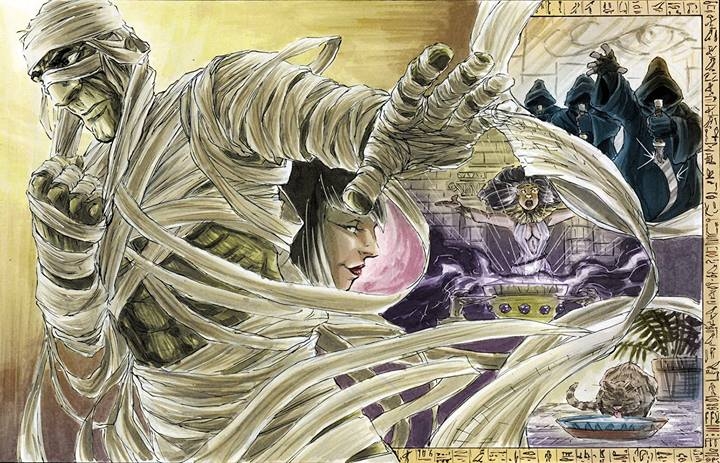 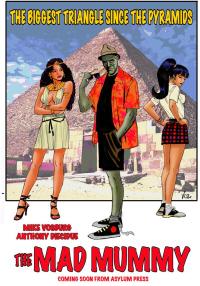 The influence of Sax Rohmer is never far away from Mike’s art. From his early professional work for Marvel Comics in the 1970s with The Deadly Hands of Kung Fu (featuring Shang-Chi, the son of Fu Manchu) to Offcastes, his 1993 Epic Comics limited series set on a future Earth that parallels the colonialism of the past right down to classic Yellow Peril elements, including the Zayat Kiss, Rohmer’s shadow looms large.

Today, Mike is best known as an award-winning storyboard artist for the Hollywood majors. He still has his hands in the indie comic world, though with such titles as Retrowood, Lori Lovecraft, and his latest creation, The Mad Mummy.

How best to describe The Mad Mummy? What if Preston Sturges wrote a screwball comedy mixing Lovecraft’s Cthulu Mythos with Fu Manchu and Universal’s monster classic, The Mummy (1932)? That’s really the best way to describe this beautifully illustrated, but decidedly offbeat, series. 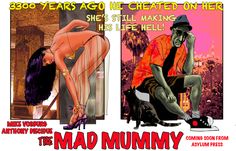 Adam Ray is an interesting older gentleman who moves into a quiet Los Angeles suburb, unaware his two exes are near at hand. The trick is Adam Ray is Aten Ra, a high priest who broke his vows and is cursed for all eternity to live the life of a living mummy.

Adam is also a former Hollywood stuntman who appeared in many of the vintage Hollywood mummy movies. He and his pet cat, whose first life was spent in ancient Egypt, take on Eminent Domain, the Elder Gods, the Council of Seven, Fu Manchu, Fah lo Suee, and even Harry Flashman in the course of this highly entertaining series. 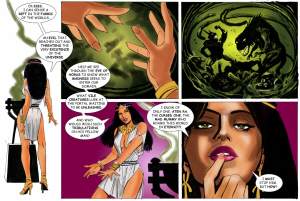 Anyone familiar with Mike’s art knows he loves the female form and his renderings here are simply stunning. The coloring is exceptional and really makes his characters come alive.

This series is filled with so many valentines to the past, the constant switching of tone and genre never phases one since we’re on a roller coaster ride with a writer/artist who loves the past as much as the rest of us. Do yourself a favor and check this exceptional series out.

The Mad Mummy is available through iVerse/ComicsPlus at: digital.comicsplusapp.com/publishers.php then type in AV Publishing or Mad Mummy in the Search button.