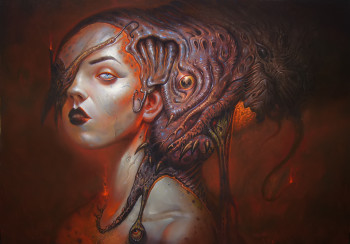 Jim Pavelec is an award-winning freelance illustrator in the tabletop gaming and comic book industry and has over 15 years of professional experience. I was first introduced to him by our mutual friend E.E. Knight more than a decade ago, and put him in touch with John O’Neill, who hired him to illustrate several issues of Black Gate magazine. He has worked on properties such as Star Wars, Lord of the Rings, Magic: The Gathering, Dungeons & Dragons, Eerie Comics, and many more. He is also co-founder of the artist’s rights website ArtPACT.

The other day I decided to sit down with him and talk about his work and the life of a professional artist. Click to enlarge any of the accompanying illustrations.

What was your first big professional break?

My first paying gig was on a card game called Galactic Empires. Its pay was royalty based (which is something I’d like to see reinstituted in the illustration world), and didn’t amount to very much, but it was a good experience overall. At that time, hardly anyone did any promotion online, so getting work published was a little more valuable in terms of getting your work in front of the eyes of other art directors. 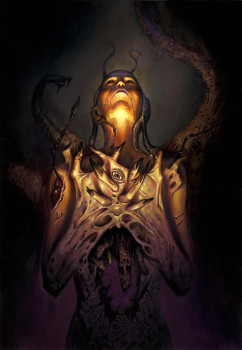 My inspirations are many, and quite varied. When I was younger the first artwork that grabbed my attention was on the covers of fantasy novels featuring Conan and Elric, so right away I was introduced to Frazetta, Boris, and Michael Whelan. Those books lead me to find Lovecraft, which fostered my love of horror, and led me to the work of Giger, Beksinski, Barlowe, and Clive Barker. It wasn’t until college that I was introduced to the origins of oil painting and the hundreds of years of great master painters from all over the globe, which really need to be explored in order to become a well rounded artist.

How has your approach to art changed in the last ten years?

I have stepped away from freelance to some degree to focus on the dark symbolic work that I do now. I still take freelance gigs, but they really have to fit my style. In my early freelance career I tended to rush my drawings in order to get to the painting as soon as possible. This led to stagnation in my work, and a general feeling of malaise in all of the work I was doing. I was also becoming bored with the repetitive fantasy tropes I was often being asked to illustrate. Therefore, I decided to work very hard on my drawing skills and draw the things that I really wanted to draw, that being the macabre and demonic. 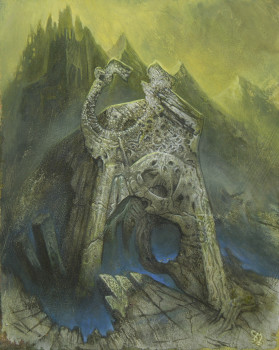 Right now I’m very much creating the art that I want to create. I would like to be doing most of my work for galleries and private collectors, as well as concept art for movies or games that were looking to do something truly dark and bizarre, but I’m not holding my breath on that last part.

What is your favorite medium to work in?

I work mostly in graphite and white charcoal for my drawings, but I’m fining that as I move into paintings I’m much freer to experiment with different media. Before, I was taking on so much work that I didn’t have the time to play around, and mostly worked in oil, or digitally.

What are you trying to achieve with your new work?

In a way, I’m kind of trying to revive the symbolist movement that was popular in the late 1800s and early 1900s in Europe. That’s an awfully grand and pretentious sounding statement, I know. What I’m really trying to do is take that part of symbolism that departed from the symbols of antiquity and embraced a personal symbolism that the artist was trying to share with the viewer, and bring that into my work. 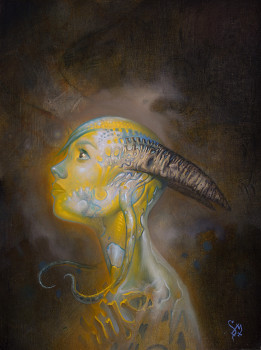 What the viewer takes away form my work is up to them. I don’t want to stand there and tell them every source I was inspired by, or what the image is “supposed to be.” In the digital age when everything is flashing and screaming at you for two seconds of your attention, I’m trying to get you to slow down and look at something a little longer. To absorb the intricacies of it, and think a little about the meaning hidden within those intricacies.

People can see see more of Jim’s work at www.jimpavelec.com, or http://instagram.com/jim_pavelec, or witness him and his art in person pretty soon in Illuxcon in Allentown, PA, from Sept. 17-21 and at the Canton Tattoo Classic from October 3-5.

I don’t like to make people feel self-conscious, but that chick up top has something on her face.