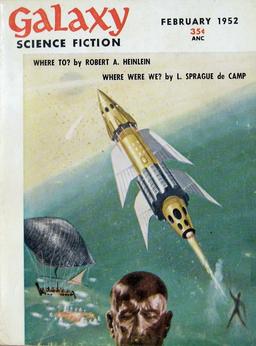 The February, 1952 issue of Galaxy included a pair of articles along with its fiction offering. I covered Robert A. Heinlein’s predictions from an article titled “Where To?” in a previous post. The other, by L. Sprague de Camp, reflects on science fiction from the late nineteenth and early twentieth centuries, assessing the failed predictions within older stories.

“Double Standard” by Alfred Coppel — The protagonist is bent on space travel, even if he isn’t suitable for colonial breeding. With forged documents and the illegal work by a plasti-cosmetician, he’s ready to board a ship to anywhere.

This is a quirky tale with a predictable ending. But it’s short enough that it works.

“Conditionally Human” by Walter M. Miller, Jr. — Norris and his wife run a district pound, not for average dogs and cats, but for genetically modified creatures. Some are intelligent versions of dogs and cats while yet another breed, called neutroids, closely resemble humans. The neutroids only grow to specific, chosen ages between one and ten and remain at that level of development. They are suitable pets for C-class couples — people who have been deemed as having a defective heredity and thus are forbidden from having children of their own. 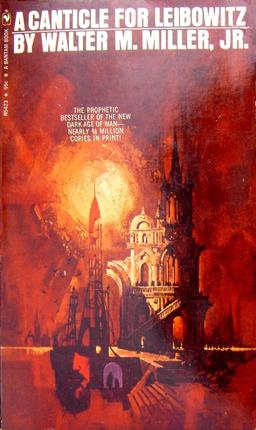 Norris’s wife isn’t used to the business, especially the aspect of destroying unclaimed units or those that have been genetically modified in unauthorized manners. And the more she voices her opinions and concerns, the more Norris comes to see things from her angle, which jeopardizes his whole career.

Walter M. Miller, Jr. is best known for the amazing novel A Canticle for Leibowitz. If you haven’t read it, you must. “Conditionally Human” is fairly unnerving, as it was intended. It is well written and stands the test of time, but I’m not sure if anyone would publish it today. It has strong commentary on human life and how society views human life.

I’m really curious what others think of this piece; maybe I’m alone in how striking it seemed. Regardless, this story went deep for me, and it is my favorite of the issue.

It was eventually collected along with two other novellas, his famous “The Darfsteller” from 1955 — the first novella to ever win a Hugo Award — and “Dark Benediction” from 1951,  in Miller’s first collection, Conditionally Human. (first published in 1962)

“Dr. Kometevsky’s Day” by Fritz Leiber — In the far future, a group marriage family tries to cope with the disturbing news that the two moons of Mars suddenly vanished.

Upon closer inspection, reporters find only a fraction of debris left behind, leaving it to speculation as to where the rest of the masses went. When Jupiter’s moons disappear in similar fashion, the family wonders if all of the remaining moons and planets will follow suit.

This is an inventive story. Some readers might be able to make guesses as to where it’s going, but I couldn’t. The dream sequences at first seem a bit jarring, but they’re very necessary to the plot, and I came to appreciate them at the end. 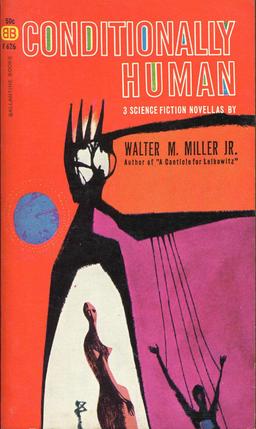 “Fresh Air Fiend” by Kris Neville — The protagonist suffers from liguna fever, a recurring condition that he contracted during his days exploring deep space. His assistant, Hertha, is mentally challenged but ever faithful. Rather than sinking more of his limited finances into trained and expert medical staff, he’s trusting Hertha to help him get through his latest bout. As he drifts in and out of consciousness, he realizes that he is completely at her mercy, and that if things turn dire, it will be too late to change course.

I didn’t like the protagonist at all, but I did feel drawn to Hertha. Neville does a good job of filling out the backstory through the protagonist’s unconscious moments.

The Demolished Man (Part 2) by Alfred Bester – After murdering his business nemesis, Ben Reich attempts to hide his tracks as well as he can. With help from a first class esper, he tries to stay one step ahead of Preston Powell, who’s leading the murder investigation. Powell is also a first class esper, though, so it’s a battle of wits and extrasensory.

The key component to the entire case hinges on finding the victim’s daughter, who witnessed the murder. After the murder, she disappeared, and both Reich and Powell use all of their influence to track her down. Without her, there is little, if anything, to press against Reich. And that makes her life – or death – invaluable.

This part was excellent. I love seeing two characters trying to outwit each other. The pace zipped along, and I can’t wait to read the conclusion. Hopefully, I won’t be disappointed. Based on the fact that this won the first Hugo Award, I doubt I will be.

Matthew Wuertz’s last retro review for us was the January 1952 issue of Galaxy Science Fiction.

“Conditionally Human” is, for me, one of the three or so most authentically moving sf stories I have ever read, in 45 years or so of reading sf.

Major Wootton – I’m glad to see I wasn’t the only one really touched by this one. Thanks for sharing.

“Conditionally Human” is a major story, I agree. Perhaps a bit unjustly forgotten?

This is what I wrote about “Dr. Kometevsky’s Day” when I reviewed the Ace Double it appeared in a few years ago:

This is a Velikovskian story (the Dr. Kometevsky of the title is transparently Velikovsky). At some time in the future, the members of a group marriage are among those who realize, against their will, that the planets are of a sudden acting like “Dr. Kometevsky” predicted — beginning with the disappearance of Phobos and Deimos. The explanation is not quite what Velikovsky might have predicted (and the story as a whole is profoundly skeptical of Velikovsky). It’s interesting enough, but not special — more interesting, perhaps, is the look at the dynamics of a group marriage.

The group marriage was interesting in how it was described, especially how uncomfortable it seemed to make one of the characters. But I really liked the aspects of why the moons were disappearing and how it tied in with the dreams. I recall hitting a moment where I was like, “Oh!” as it suddenly dawned on me.

Hey, Matthew, I am sorry I did not weigh in on your posting on the Heinlein and de Camp articles. Predictive power is not that important to me when I read old Science Fiction. Since I read a lot of old SciFi and few, if any, made accurate predictions, I guess my point is obvious.

Yeah, “Double Standard” was predictable but it was still worthwhile. I think some lighter and less thoughtful pieces like this can actually help round out a magazine, as long as the writing is excellent and the science is plausible.

I am starting to think that I need to find and read everything that Walter M. Miller Jr. wrote. “Leibowitz” is stunning. I cannot think of any work of scifi that speaks in such a reverent tone. “Conditionally Human” is one of the most uncomfortable things I have ever read. Here is a society that judges humans worthy or not for having kids, and then compensates them with pseudo-living kidlike things that are regarded as property. “Striking” is a good word to describe it.

I think it would be published today in one of the surviving digests, but I do not think it would gather much mass appeal. People don’t like to be challenged when they read. They want their belief systems and their comforts validated. As SF and fantasy readers, we stand alone in our willingness, even desire, to be challenged and even made uncomfortable by what we read. After all, how can you find absolute truth if you don’t seek out challenges to the truths you hold dear? Holy crap I am raving on and on here. Seriously, though, how many people read political rantings or romance novels to challenge themselves and find growth? OK, shut up, Gus.

I did not see the ending of “Dr. K.” until I got there either. It was a bit disappointing, actually. I felt that I was being set up for some hard science and it turns out to be another alien invasion. I did like how the dreams worked out to be a form of communication, in some form.

I wasn’t sure what to make of “Fresh Air Fiend.” I enjoyed the narrative and appreciated Hertha’s devotion. The ending was logical and cringeworthy, and I suppose we are supposed to find irony in that Hertha’s determination to follow instructions will ultimately kill the protagonist. SHe is following his words to the letter, but missing the important efficiency factor. I love a good ironic situation, so I suppose this fills a similar need for lighter (or at least shorter) material, like “Double Standard.”

So, “The Demolished Man” is off to a frenzied pace now, with the desperate chase for the only witness to the murder at the center of our story. Alfred Bester throws so many characters and situations at his readers that we are left to enjoy the pacing as much as the characters and the plotlines. I did not know that this won the first Hugo, and I am looking forward to the final installment.

See you next month. It is good to see some others get in on the conversation.

Thanks for your comments. I liked the ending to “Dr. Kometevsky’s Day” even though it wasn’t hard science as much as it was plausible science fiction.

I think Walter M. Miller Jr. only had one novel published. And with as much as his fiction seems to really affect people, based on the comments in this thread alone, I have to wonder why he didn’t have more novels published. I guess I don’t know enough of his biography to really answer that, assuming that would tell me anything.

See you next month!