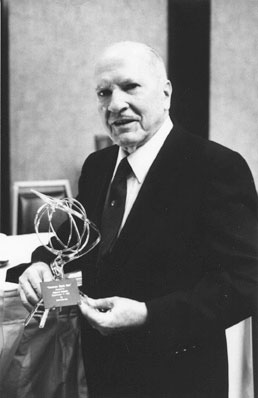 The February, 1952 issue of Galaxy opens with two articles, and I don’t usually cover articles when I’m reviewing the fiction of each issue. In this case, I couldn’t resist commenting on Robert A. Heinlein’s article: “Where To?”

The first article is by L. Sprague de Camp, commenting on how science-fiction predictions from the late nineteenth and early twentieth centuries failed on many levels. So it is ironic, I think, that it’s is followed by Heinlein’s, which gives its own point-blank predictions for the future. Heinlein feels that by comparing the present (that is, 1952) to the past (1900), he can reasonably predict what the future (2000) would look like.

Heinlein believes that the curve of human achievement — advances in science, technology and transportation, for example — is one that will rise with increased steepness. And in a graph he provides, it reminds me of an exponential increase (no numbers are shown, so that’s just a guess on my part).

Heinlein’s predictions fall into two categories — achievements that are probable and things we won’t get any time soon, if ever. He was almost 100% correct (or arguably perfect) on the items we would not achieve by 2000: time travel, traveling faster than the speed of light, control of telepathy or E.S.P. phenomena, “radio” transmissions of matter, real understanding of what “thought” is and how it is related to matter, scientific proof of survival after death, manlike robots with manlike reactions (Asimo, the Honda robot wasn’t introduced until late 2000), and a permanent end to war. One item that’s arguable is laboratory creation of life, depending on whether or not cloning counts.

For the achievements Heinlein predicts as probable, however, he is far from the mark. His predictions include: personal flying vehicles (he doesn’t call them cars), bubbles around housing (to retain warmth around the yard, even in cooler months), living on the moon, space travel through the solar system (available to everyone), longevity (and retaining the physical appearance of youth), a cure for cancer, and intelligent life on Mars.

I will give him “close enough” credit for this thought: “Your personal telephone will be small enough to carry in your handbag.  Your house telephone will record messages, answer simple queries, and transmit vision.” This is close enough to cell phones and voice mail that I’ll give this one a pass.

And one he’s completely correct on: “Mankind will not destroy itself, nor will ‘civilization’ be wiped out.” Of course, this is a safe prediction because if it wasn’t true, who could dismiss it?

Interesting. Does this say anything in general about sci-fi authors’ ability or inability to predict? Hmmm . . .

I do admire Heinlein’s boldness, though. “Let me tell you about the future…” Just throw it out there for the world to see, in one of the most popular magazines of the day. Good stuff.

Well a Science Fiction writer any prophecy about the future, even the most “A… Retentive” heavily researched stuff. And the latter, well yesterday’s Jules Verne is today’s Steampunk and yesterday’s HG Wells is today’s HG Wells. A.C. Clark, RIP, though I love his works dearly despite disagreeing about the ‘paranormal’ opinion is already “Dieselpunk” while wilder, crazier authors that were just storytellers -Jack Vance- for instance are proving the test of time.

For “future histories”, any prediction of the future, I refer people to the 1936 Kordova film “Things to Come” – which I think was the only HG Wells film the author had any say in. Well, it was a disaster, booed out of theaters in England for predicting another world war at the turn of the century.

Even still, it affected the “Future” and the “Present”. Audiences were so outraged by the depiction of Gas warfare, even as vanilla as it was compared to RL and the hint of Biological warfare that the British PM called Adolf who’d also heard about the movie and was eager to see it and talked about that issue. Hitler agreed, “No Soldier should ever endure the horror and suffering of poison gas!” and made a steadfast promise he kept to the bitter end… (The V2 rockets were originally to mist disperse Sarin gas, not just be sub-Hamas level bombs…) Hitler was a soldier and had been hit by mustard gas twice. He didn’t mind using it against other groups, but everyone hated them then, but not a legitimate soldier.

Now, the rest of the movie, well it diverged significantly from history as it happened. But in another way, isn’t it an exaggerated version of the 40s, 50s, 60s and onwards? It was even quizzed by Stanley Kubrick what sci-fi film Mr Clarke loved the most. This is when they were making “2001” He said this movie. Kubrik watched it in private and said “I never want to hear another movie recommendation from you…” It was a sci-fi movie made with “Paleo” technology by even that day’s standards, yet it was perfectly realized and done so powerful that he simply couldn’t top it. There’s a mild conspiracy theory that he’s the guy that made it a “Lost film” for decades, sending fake ‘commands from central’ for theaters to dig up and destroy their reels.

Heinlin was pretty right on, IMO. I’m a bit peeved people seem to love to hate him since he was -gasp- “Politically Incorrect”, but IMO his best prediction was on “Artificial Intelligence” in his novel “Friday” which I read in Grade School after finishing “Star Beast”. Yeah, I liked the un-zipped boobies…

Essentially the artifical woman (a clone or rather Android – meaning flesh, chemicals, etc. versus Robot metal/plastic or Cyborg-combination of both) speculated on artificial intelligence. A ‘news article’ people were talking about. “Scientists are on the verge of creating the first artificial intelligence, a self-aware computer!!!” Well she was skeptical and just said -to the effect of – “We always have those types of articles, every 5 years or so… Nothing comes of them. I’m not saying they are charlatans or dumb or anything, they probably succeed. But – their think bot becomes aware and then realizes its totally an alien in an alien world that it can never be part of and it either blows its circuits or goes so crazy its not responsive. Didn’t the last one cause a fire that burned down the building, every vacuum tube at once popping? And they tried to jail the poor Grad Student who put in a philosophy question to it…”

—-Anyways, that’s what I remember, Friday is buried in a box somewhere, but I’m sure I got the gist of it. And I think he was right.

He was right about other stuff;

1. Soldiers write terrible (I.E. Can’t sell) war stories. He himself was proof.
2. Virgins write the hottest sex scenes.
3. Sci-Fi has nothing to do with “The Future” and everything to do with how “The Story” works, later echoed in Niven’s “Bolognium” hypothesis.

Interesting insight. L. Sprague de Camp’s article reflected on several examples from older science fiction. One of the biggest inventions they failed to predict was the automobile, but they had other ideas for transportation, such as blimps.

Really, though, the prediction aspect of science fiction isn’t as important as the tales themselves. H. L. Gold said it was only about what was possible, not what would definitely come to be. It’s an interesting art form.

And this would make a great article/essay; Human stupidity and greed thwarted what we’d really have.

And that goes into the “Well researched, best predictions” issue. The consensus was we’d have great big cities, perhaps giant dark Satanic mills of movies like “Metropolis” or land air, sea, underground utopian arcologies like Things to Come. These things would have public transport. Slidewalks, tubes, trains, escalators, elevators… Everyone needs to get around therefore transport is a public resource, the government will hire experts to make the best slidewalks and the cost will be cost only in public taxes… They were actually chided for “Predicting the Obvious” then… And “Personal land, air, sea vehicles” would be something that people might rent, or government would use, or the richest -or the Science Hero!- would have -Or even want…

“Well, yes, every child has dreamed of having a personal rocket like the members of the Hero family and be part of the Manifest Destiny team. But, really, that’d be all my life’s savings and more and all that work. But for 100 pence I could vacation on Mars, and for nothing thanks to the Hero Family I could slidewalk to Paris if I wanted. I’d rather save for a rainy day, though I’ll confess…. Slithers! See? He’s my lobotomized and re-programmed personal butler. A malcontent rebel from the Jungles of Venus, but he’s now a good sub-manservant. Look! See how he always carries an Asbestos towel? Asbestos, a clean, science material!”

Now, what happened in RL?

Well, the drop in oil prices made the automobile companies very, VERY rich. They simply bought out public transportation, still in its infancy, and SCUTTLED it to force people to buy cars. And they worked out “Zoning” laws to force people to live un-walkable distances between home and work and shopping and public services. This is no “Conspiracy Theory”, look it up, they were actually brought to trial to prove this and found guilty…and fined $5000…

Another neat factoid is expressed in a recent Cosmos “The world set free” – named obviously after a lesser known Wells story – we actually had Solar power before reliable electricity. A scientist/inventor worked out a way to use the sun to efficiently heat water and drive a steam engine, producing ice in the dog days of summer at the Paris world’s fair. He’d have been legendary but almost immediately after oil prices dropped to a fraction of what they were and people just went to buy cars which were gas run, not electric which one of his inventions again could charge for free. This also brought demand for coal down, so no need for his more complex – only in setup – but free with minimal maintenance afterwards – machine.

Also, and please forgive the length, we have had the Internet predicted time and again. It’s usually called “The Communications Network” or “Vac Tube array”. It’s just not described in gross detail till recently because “Starr Hero fights the Pirates of Venus!” is better reading than “The world of the Future! Two kids on a Furry Muck pretending to be Lesbian Panthers at 3 AM. Mom! Bathroom! BATHROOM!!!”

Oh, and H.G. Wells predicted NETFLIX – his book “When the Sleeper Wakes” – they had machines – again through ‘the communications network’ that could record and re-play images. It was said that one could watch “Any play ever performed within the last 100 years… And dealt with a much sooner issue, the outrage of actors, musicians, the extinction of the ‘bard’ when it became possible to record music. Why pay for a band when someone can pay for it once then sell you a recording you can play many hundreds of times at 1/20th or less what the band, now in rags, would charge you?