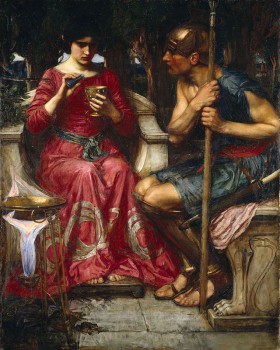 Today, we’re concluding our wanderings through the Mediterranean with Jason and the Argonauts as we look at the major tropes explored in Apollonius’s Argonautica.

A beginning, like an ending, is a very delicate time.

End The Blair Witch Project in just the right place and it’s a short film about three kids who filmed their uneventful camping trip. Cut Old Yeller early and it’s a charming story about a boy and his dog.

Take out the majority of the story of Jason and Medea and it’s a rip-roaring adventure with a strong side of romance.

You have to feel bad for Apollonius. As much as I joke that the work ought to be called “Medea and the guys she got a ride from”, it really is the Argonautica. It is supposed to be the story of the Argonauts, led by Jason. Unfortunately the whole of the story doesn’t cooperate. Once Medea arrives in the myth, she takes over and pushes all the other actors to the sides of the stage.

The author had a similar problem with Heracles, but myth provided a way out. And while Greek audiences would tolerate a lot more play with mythological canon than any modern audience would (wait, who am I kidding, they just made another Hercules movie), there wasn’t a way to remove as critical a character as Medea.

Once Euripides has done a play on your life, you’re kind of a big deal.

So how does he keep Jason and the other Argonauts centered in the work?

Careful framing. He lets it stay a romance by portraying Medea as young and innocent, Jason as good but naive, and all the Argonauts as heroic. And he maintains that framing by ending the Argonautica the instant they return to Greece. If this were the Odyssey, we’d have their welcome home feast. If it were Gilgamesh, we’d have reflections on the nature of life. Instead, we have a fairly abrupt ending at the beach. Why?

Because Medea dives further into her mass murder career shortly after landing. According to myth, she realized that Pelias was still a threat to Jason. (Pelias was, you remember, the one who sent him on the Definitely Fatal Quest for the Golden McGuffin to begin with.) She arranged his murder in a particularly gruesome way.

Having heard that she was a powerful witch, Pelias asked if she could reverse his old age. She claimed she could, and demonstrated by taking an old ram, cutting his throat, chopping him into pieces, and throwing him into a boiling kettle. Moments later, a young lamb sprung out of it. Medea gave Pelias the recipe and told him that his daughters had to perform the ritual precisely as she had written it down.

Spoiler: dad did not come back to life or youth. Pelias’s daughters were left with dad stew, and Jason and Medea fled to Corinth. Jason quickly realized that he was terrified of his wife, saw a chance to move up in the world, and attempted to throw Medea over for the king of Corinth’s daughter, Glauce. Medea then arranged for the murder of Glauce and her father, Creon.

What follows next depends on the version. Prior to Euripides, it seems that Medea either killed two of her children by accident or they were killed by the Corinthians outraged by the murder of Creon. In Euripides, she kills them herself in a final act of vengeance before flying off in a chariot pulled by dragons. 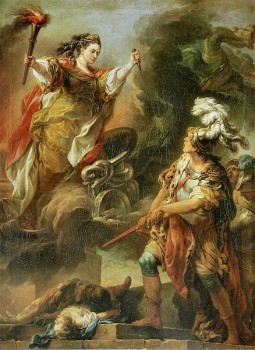 Girl knew how to make an exit.

This last version is the one that remains. If you know who Medea is at all, you probably remember her as the woman who murdered her children.

How do you have a story with Charlie Manson without having it be a story about Manson? How do you write the love story of Ted Bundy?

How do you write the story of Jason and Medea? You end it in just the right place. So Apollonius leaves them on the Argo, still in love, and only a little blood on their hands.

Coming in two weeks: What did Gilgamesh ever do for us?

When I was a graduate student in the ’80s, one of my classes studied Euripides’ “The Bacchae,” and our professor suggested Euripides was considered by some to be an early feminist, based on the ending of his play “Medea.” The play was also a prime example of the concept “deus ex machina,” as Medea is literally plucked from peril by a god in his chariot. Our professor also put a different spin on the Jason/Medea story, suggesting Jason was approached by the Corinthian king and ‘persuaded’ into accepting the king’s daughter’s hand and ending up as ruler of TWO kingdoms (the king convinced Jason that Medea was always considered an outsider by Jason’s subjects). Medea murdered her two children by Jason in revenge, after first presenting Jason’s new bride with a golden robe, into which she had sewn poison; the young woman tries the robe on and bursts into flame. Jason pursues the fleeing Medea, but she is plucked from danger as the play ends.