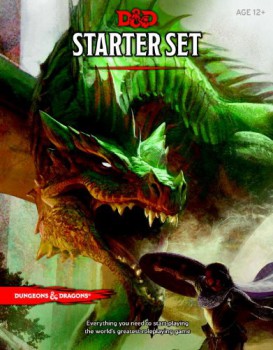 We invited America into our home last month to sit down and talk about fantasy, and America showed up. It stuck around too, peeking under the couch cushions and rooting around in the back of the fridge. By the end of July, the Black Gate servers had racked up 1.1 million page views — a new record for us, and the first time we’ve ever crossed a million.

We’re celebrating a bit this month, but not too hard. Because America is still here, with an insatiable appetite for news and reviews on the latest in new and classic fantasy. And also for bean dip, which America eats in great quantity. Unfortunately, America ate all the chips and left the lid off the salsa, letting it dry overnight. We love you America, but come on. Don’t be a jerk.

The most popular article on the Black Gate blog last month was a forensic analysis of the brand new Dungeons & Dragons Starter Set by Andrew Zimmerman Jones. Interest in the re-launch of D&D — which officially kicked off this month with the release of the new Player’s Handbook — has been very strong.

Next on the list was Howard Andrew Jones’s conversation with author Mark Lawrence, on the occasion of the publication of his new novel Prince of Fools.

Third was “Reading the Entrails,” Matthew David Surridge’s lengthy analysis of 25 years of Locus magazine reader polls on the Best Fantasy Novels of All Time, and how the results have changed over the years — and surprisingly, how they’ve stayed the same.

Rounding out the Top Five were D.B. Jackson’s article, “The Life and Times of a Midlist Author,” and James Maliszewski’s nostalgic look back at previous editions of Dungeons and Dragons, “New Editions Past.”

The Top 5o Black Gate blog posts in June are here and you can see all 114 posts we made in the month of July here.

Congratz on the million+ hits! I for one stop by every day. It’s nice to know I’m in good company 😉

Thanks for continuing to provide genre fans with such an excellent resource.

I’m in agreement with Gruud, so why haven’t we been nominated? I’m guessing because Hugo’s are a cool kids club where only the select few ‘friends’ get nominations, unless you have a runaway hit that brings the award legitimacy. To prove this, just ask Michael Whelan or Phil Foglio, both of whom finally said ‘enough, I refuse to let you nominate me again so other people can win!’ 🙂

Thanks for the kind words, and your support. As for the Hugos… I have the upmost respect for the hard-working fans who administer and run the Hugo Awards, and I think they’re doing a great job.

Why haven’t we been nominated? Because not enough readers nominated us. Simple as that, really… there’s no “cool club” for us to join that would help (trust me — I looked!)

Bear in mind that for our first 5-6 years BLACK GATE didn’t have nearly enough readers to warrant a major award nomination. 2014 is really the first year our presence has been felt in the industry… so it seems a little impatient to start asking about awards just yet.

Besides, there IS no Hugo for “Best Website.” The closest category we might fit into is “Best Fanzine,” and we’re an odd fit there as well.

All in all, I don’t think a Hugo nomination is in Black Gate’s future (unless the nominating committee adds a Best Website category, which they’ve done in the past. And even then… have you seen our competition? There’s some stellar sites out there who have been denied a Hugo a lot longer than we have!)

I’ll readily admit my grasp of the various categories is a bit lacking, but do see what you mean now; not quite a fanzine, but not quite a blog/review site either, due to having so many topics and contributors.

But it is a very pretty site, whether it falls into a gap or no. So we’ll just hold out hope, and keep coming by.