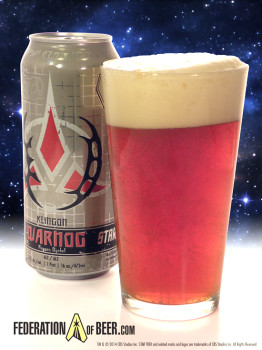 With all due deference to responsible drinking, I find it my enviable (?) duty to inform Black Gate’s readership of a significant development in the parallel universes of Star Trek and craft brewing. Yes, I’m referring to Klingon Warnog, available from Tin Man Brewing out of Evansville, Indiana, and released just a few weeks back on July 26, 2014.

Tin Man’s own site has precious little to say on the subject:

As for the Federation of Beer, which one must suppose is where James T. Kirk spent most of his academy days, they claim their Warnog is available only in Alberta, Canada, which directly contradicts the news release provided by StarTrek.com, whose staff provided this write-up:

All we can say is… Qapla’! Klingon Warnog beer will at long last be available in the United States the week of July 28, via The Federation of Beer and Indiana-based Tin Man Brewing Company. The Star Trek-themed beer, a high-quality Roggen Dunkelweiss, or Danish Rye Beer, will be available at select liquor stores and bars in Indiana and Washington State. Klingon Warnog Ale is brewed to capture the warrior essence of the Klingon culture with its bold and unique taste.

Even that seems suspicious, however, since the invite cards (to release parties in Evansville and Indianapolis, and no, I was not invited, and yes, I am miffed) specifically cite July 26th, which by definition falls before the week of July 28. Possibly somebody set the controls for time warp? 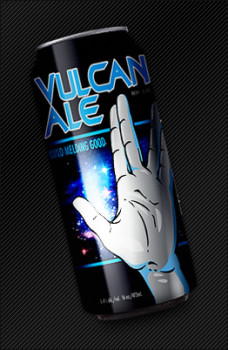 To add to the festival atmosphere (and the confusion), it turns out that the mysterious Federation of Beer has also released a Vulcan Ale. Now, it may be that I’m getting rusty, but why isn’t this brew a Romulan Ale? Don’t the Vulcans prefer something a wee bit less debilitating, like, say, a tankard of Picard’s Earl Gray tea, or perhaps a jug of powdered milk?

To further trouble the waters, I must point out that because I am human, not Klingon, and because my geek streak runs only just so deep, I had to to look up the word “warnog” in order to be sure I wasn’t employing the sort of blue language impermissible here on Black Gate. To accomplish this, I turned to Babylon.com, which informs me that “warnog” should be spelled “wornagh,” that it is in fact a Klingon word, and that it actually means Klingon ALE.

So now I’m really baffled. Was the Vulcan Ale supposed to be Vulcan Beer (or milk), while the Klingon Beer (warnog) should more properly be Ale? Help me, Obi-wan Kenobi. You’re my only hope.

Did I mention that Vulcan Ale, despite being brewed by Harvest Moon Brewery out of Montana, is available (so claims the Federation (of Beer)) only in Canada (at large and not just Alberta)? I suppose we should be pleased that Vulcan drinks are more widely available than their Klingon (possibly dangerous or at least misunderstood) counterparts, but what if I, as an epicurean drinker, prefer beer to ale? Must I hop in a transporter and beam all the way to Alberta for a simple libation?

Fact: I’m an Evansville resident, and so far as I can see, Klingon Warnog is nowhere to be found locally, although there was a release party at the Sports Book Bar & Grill, 615 NW Riverside Drive. I must mention again that I did not receive an invite until well after the fact, and I am becoming more irate about this by the moment, since StarTrek.com claims that had I attended, I would then have a received a free (FREE!) pass “to see 80’s pop star Tiffany at the Tropicana Evansville Boogie Nights.”

Imagine. Tiffany, in the flesh.

Does Tiffany have anything to do with Star Trek? Or beer?

Oh, who cares. As you can see from the invite card to the right (the one I didn’t receive until it was TOO LATE), the Tiffany shindig was a slumber party! Now I’m really depressed.

The cure? More Warnog. Or Wornagh. Or maybe some milk.

Ah, so proud of my hometown right now… 🙂

Regarding your bafflement: it may be helpful to note that Ale is a subcategory of Beer, the other primary category being Lager. The difference is in the type of yeast used. Lager beers are brewed with bottom fermenting yeast, a type of yeast that works best in colder temperatures. Ales are brewed with top fermenting yeast, a type that works best in warmer temperatures. So, unless either of these Star Trek beers are lagers, Ale and Beer are essentially interchangeable terms.

Ken – Yes, yes, and yes, but I was writing with my tongue firmly in cheek (it’s still there, actually). Brewing-wise, you are entirely correct. In terms of my thought process, I guess I tend to default to the marketing side of things, since I’m an avid beer can collector, and there’s no question that Ballantine Ale (for example) never once tried to exchange the word Ale for Beer (‘cos they also made Ballantine Beer, etc.). So what is interchangeable at the source is quite the opposite once a product heads for the shelves, or a keg.

Meanwhile, you and I both had stories in the recent anthology ANCIENT NEW. Small world! : )

Yes. My family lived in several cities in Indiana when I was younger, but I consider Evansville my hometown. Glad to see it made Black Gate news with a connection to Star Trek. 🙂