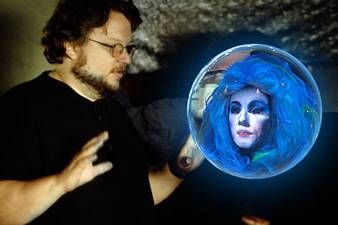 Is it possible to wait for something for a very long time and still find it lives up to your expectations? If you’re like me, you probably have some pretty profound examples on both sides of the argument, especially where movies or books are concerned.

This week, there are (finally) updates on two movies that I have personally been anticipating for over a year, with news on one being somewhat of a disappointment.

To start, in January, 2013 I reported Disney had tapped Guillermo del Toro to reboot the Haunted Mansion. In case you haven’t been keeping track, there had been a 2003 attempt to bring the backstory of the popular theme park attraction to the big screen starring Eddie Murphy.

But if you don’t remember it, consider yourself lucky.

Needless to say, the idea that the man behind Mama and Pan’s Labyrinth was taking what could potentially be an R-rated swing at Haunted Mansion gave me chills (in a good way).

However, del Toro had and continues to have quite a lot of irons in the fire, including Pacific Rim 2, Kung Fu Panda 3, and a creepy, animated version of Pinocchio, among others. All this makes me ever-so-slightly worried that del Toro is spread too thin to give Haunted Mansion the attention it deserves.

This week, during a Reddit AMA session (aka online interview), del Toro provided a long-awaited update on the Haunted Mansion project, but it doesn’t sound all that promising.

Well, 2 weeks ago, I went back to Disneyland with the executives with whom I am developing the screenplay. It’s a hard screenplay to crack. We’ve done it a few times. We are on our third or fourth draft, with 2 different writing teams, and I think the main thing is to try to combine everything that is great about the ride into the movie, and to make it a really intense but with a sense of fun – just like the ride. It’s a tough balance, and I would be happy to report if we had the screenplay. We always feel like we are very close, but not yet.

We have developed 50-60 pieces of art, We’ve developed maquettes of the Hat Box Ghost, over the body and face of Doug Jones, but we have not succeeded yet in cracking the screenplay. I have to believe that Disney will make this movie as soon as we crack the screenplay, but until then we cannot tackle it. It is a movie I would love to direct, but I would be happy to just produce it if the timing is not right.

I, by the way, was named Guest for the Day for the Haunted Mansion the last time I did, which gave me unlimited access to ride the mansion several times during the day. Unfortunately it was just the moment my left knee decided to bust and I had to go back home with a busted knee. 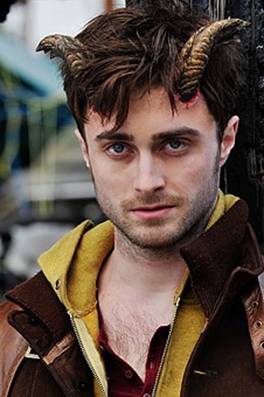 Okay Guillermo, we get it. It’s a challenging (and apparently dangerous) script to write; but more challenging then The Hobbit? You’ve done two of those since Disney first rang you up. What gives?

Granted, I would prefer del Toro take his time and not rush through another treatment of Haunted Mansion that will end up being on par with the 2003 travesty, but I’m concerned at his inability to “crack” the screenplay. Though I reported del Toro’s involvement a year and a half ago, he has actually been at it since Disney signed him in late 2011.

Sigh. With fingers crossed, we’ll continue to hope for the best on this one.

Moving on, it has been almost two years since we reported Daniel Radcliffe was starring in a film adaptation of one of my favorite Joe Hill novels, Horns.  Since then, filming wrapped and Horns made its premier at the 2013 Toronto International Film Festival that September, where it was picked up for international distribution by Dimension Films.

Then all went quiet.

Considering the mixed reaction Horns received from critics, I was losing faith that it would ever land in front of a wider theater audience; though I am prepared to see it regardless, based on my fondness for the source material.

Then suddenly this week there was flurry of activity. 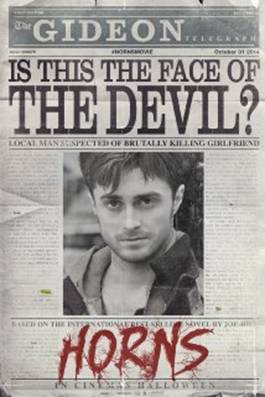 RADiUS, who landed the US distribution rights for Horns along with Dimension Films released the first “teaser poster,” along with a short trailer.

Both make the movie look pretty darn interesting, as they are meant to, of course. October 31st has been announced as the UK premier, so I expect a US release to happen around that same time, though a date has yet to be confirmed.

If you haven’t read Joe Hill’s book, the premise has Radcliffe starring as Ig Perrish, a man living in the hellish aftermath of the brutal rape and murder of his girlfriend Merrin (Juno Temple). To make matters worse, everyone thinks he did it.

A year after Merrin’s death, Ig wakes up hungover, discovering that he’s sprouted a set of horns, which give him the ability to lure the deepest secrets and intentions from anyone he encounters. Ig eventually decides to use this ability to uncover the truth about Merrin’s death.

Horns the novel is dark; very dark actually, yet sprinkled with the right amount of graveyard humor to keep you from being completely horrified cover to cover. With almost as many film critics praising the movie version as not, I am hopeful that those who didn’t love it just couldn’t get into the twisted nature of the storyline.

One thing they do all agree on is Radcliffe’s impressive performance – there’s nothing cute or Harry Potter-like about it.

Here’s a peek at the trailer:

What do you think?  Will del Toro eventually create a Haunted Mansion great enough to erase the travesty of 2003?  Can you buy into a potentially murderous Daniel Radcliffe?  Post a comment or drop a line to Sue@blackgate.com