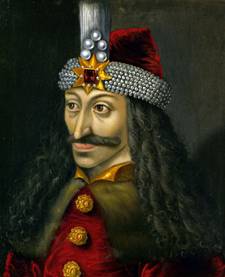 The Goth Chick News office has been closed for the last two weeks while I did a bit of globetrotting to dig up some interesting gothy bits of news from elsewhere in the world.

And this one is a doozy.

While I was visiting Italy, a picture in one of Rome’s newspapers caught my attention. I mean, Vlad Tepes is recognizable in any language, but it was necessary to employ some translation software to figure out why he was rating coverage in a city paper not exactly known for subject matters like Dracula.

What I learned was this.

Estonian researchers apparently believe they may have finally discovered the whereabouts of the grave of Vlad Tepes III, which is in Italy and not the Romanian Alps as first thought.

In case you’ve forgotten the background, Vlad was the 15th century Prince of Wallachia in Eastern Europe, known posthumously as Vlad the Impaler and the inspiration for a countless (and growing) number of books, movies, plays, comics, etc, etc. 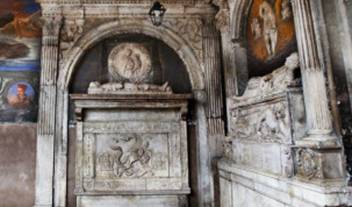 Born in 1431, Count Vlad Tepes was part of a noble family who belonged to the Order of the Dragon, a group that was founded as a means of protecting Christianity from Ottoman expansion in Eastern Europe. His father was nicknamed Dracul, meaning “Dragon,” so the young Vlad became known as Dracula, or “son of Dragon.”

In 1476, Vlad Tepes disappeared in battle. While some sources indicated he died, researchers believe he was in fact imprisoned by the Turks.

His daughter Maria had been brought to the Neapolitan court, whose ruling family was allied with her own family. There she was adopted and eventually married to a Neapolitan nobleman.

Scholars from the University of Tallinn say they have discovered evidence that suggests the count was taken prisoner, ransomed to his daughter in Italy and then buried in a church in Naples. The Piazza Santa Maria la Nova does contain the graves of Vlad’s daughter and son-in-law, and researchers are claiming a newly uncovered headstone, nearby theirs, marks the final resting place of Dracula. 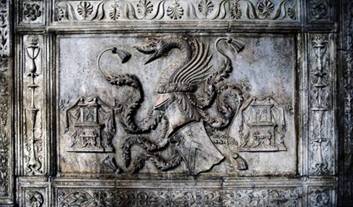 The headstone was discovered by Neapolitan student, Erika Stella, who is writing a dissertation on the history of the church. Stella shared a photograph of the headstone on the Internet and experts have identified it as Vlad’s with a certain level of confidence.

Medieval history scholar Raffaello Glinni said the 16th century tomb is covered in images and symbols from the “house of the Transylvanian Carpathians,” and subsequently is not likely to be the tomb of an Italian nobleman.

When you look at the bas-relief sculptures, the symbolism is obvious. The dragon means Dracula and the two opposing sphinxes represent the city of Thebes, also known as Tepes. In these symbols, the very name of the count Dracula Tepes is written.

Researchers are asking authorities for permission to open the grave to verify their findings.

Bad idea if you ask me…

Did Vlad live out his days in sunny Napoli?  Would that ruin him for you if he did?  Post a comment or drop a line to sue@blackgate.com.

Fun news! I sure hope that tomb is empty, totally lacking in any DNA! 🙂

Research indicates there are direct blood-line decedents to Vlad Tepes living today, including (maybe) Prince Charles of England. And as Vlad’s daughter is definitively buried nearby, if there were any DNA scraps to be tested in the new grave, it would likely be possible to ID them for sure.

But I’m leaning in your direction – I would prefer not to imagine Vlad living out his days as a tottering old man tending a vineyard in Naples and dying peacefully in his sleep.

But that’s just me…

[…] First, in June come the report from the University of Tallin, that Vlad Dracula’s final resting place was likely not in the ruins of a Romanian monastery but was instead in a Neapolitan chapel. […]