I am a writer, and have been for some time, although I live on a busy full-time job and I only started getting paid for writing in 2006. I feel like I had a long training wheel stage, although maybe because I’m only comparing myself to my expectations. My dreams of writing as a living, like those of many, started when I was a teenager.

There’s a lot of talk out in the world about making it as a writer, whether through traditional publishing, self-publishing, large press, or small press: how much marketing is needed, how much it costs, and whether it has any effect. It becomes a bit dizzying and pretty much bereft of data.

One bright light of hard data is Jim Hines’s yearly “Writing Income” on his blog. Hines is a fantasy writer and he’s blogged very frankly about his income since 2008, partly inspired by a John Scalzi post at that time. Scalzi admits he’s an outlier, but many of the financial points he makes are very good for anyone, including me.

Like I said earlier, I have constantly felt I should have been the writer I am now much earlier, like during grad school. But I take some consolation in the idea that no one expects to sit down at a piano for the first time and be able to play a concert, as well as Stephen King’s advice that one must write a million bad words before the good ones come out. (My rough estimate is that I’m at about 900,000.) Artists have a similar idea, but I think it’s 10,000 bad drawings.

After two failed novels over a decade in my twenties, I decided I needed to learn faster and better, and turned (as the advice generally runs in the scifi/fantasy industry) to short fiction. I think I’ve gotten good at it, but haven’t seen a lot of posts on the income to be made from short fiction. It ain’t pretty, but it’s the slow making of a name, and getting better at the craft and the art.

In the same vein as Hines and Scalzi, I thought I’d open the kimono on the economics of being a short fiction writer around a full-time job. 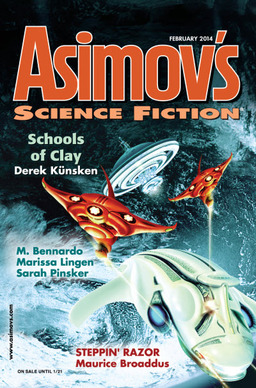 Derek Künsken writes science fiction, fantasy and horror in Gatineau, Québec. You can find out more about him at www.derekkunsken.com or @derekkunsken

Derek: I love Juan Caceres in the Zapatero’s Workshop SO MUCH. Thanks for your work. Keep at it!

The plus side of writing mostly flash fiction: it’s possible to–occasionally–tuck it into an insanely busy life.

The down side: even at pro rates, ain’t much money in it (although a couple of those checks have arrived at opportune times).

Hey Theodoric! Thank you so much for the kind words. Writing Juan Caceres was a lot of fun too 🙂

[…] little while ago I blogged about The Economics of Short Fiction, and feedback was that there’s interest in a short series (no pun intended) on the selling of […]