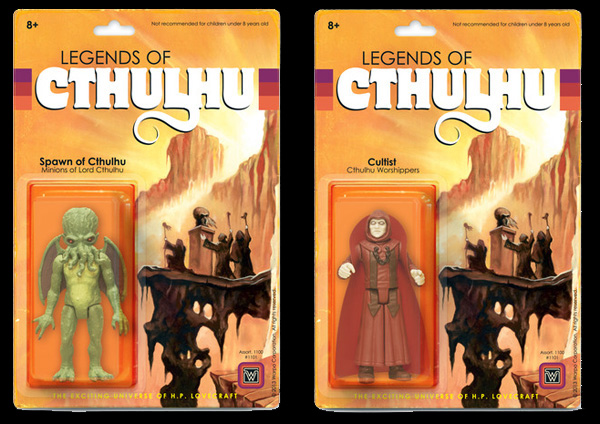 We always felt that Lovecraft’s worlds were deserving of their own action figure line and what better time period than the late 70’s / early 80’s when his work first began its modern-day resurgence … The result is our interpretation of what a major toy company in that era would have done with these characters and how a creative team of the period would have translated H.P. Lovecraft’s stories into a mass-market children’s toy property.

In keeping with the early 80s ethos, Warpo hired Eddy Mosqueda, who worked on the Teenage Mutant Ninja Turtles and Masters of the Universe, for the figure sculpts. For the blister-pack art, they engaged the talents of Ken Kelly, who painted some of the most incredible art ever to adorn a backing card; just check out the packaging he did for Micronauts and the Dungeons & Dragons toy lines.

Everything about this project is pitch perfect, from the vinyl cape of the Cultist to the T-hole, fonts, and color palette of the cards. Ia!

Having exceeded their $60,000 Kickstarter goal and stating a disinterest in “remaking or reissuing old toys or licenses,” we can only wonder what else Warpo has in store. Will there be a second wave of Lovecraft figures? Perhaps a plucky lady journalist, armed with cloche hat, pearls, and revolver, uncovers a conspiracy led by a Great Old One and evil witch Keziah Mason (complete with Brown Jenkin accessory)! Or will Warpo expand into new (and, most likely, public-domain) IPs? Will David Innes and Dian the Beautiful battle the mahar and their savage sagoth slaves? Or will Bedford and Cavor square off against the menacing Selenites?

With Warpo, your nostalgia and upper-middle-class disposable income control the action!

If I could post images in this blog it’d probably be the “Take my Money now!” meme with Fry from Futurama.

At the Mountains of Merchandise 🙂

Toys based on classic fantasy or SF are few and far between, so get ’em while you can. Many years ago, someone put out some figures based on Edgar Rice Burroughs’s characters. They weren’t particularly well done, but I grabbed them anyway – where else was I going to get a Green Martian warrior and a lizard-man from Pellucidar to put on my desk?

I remember those, Thomas. The ones made for the short-lived Tarzan TV show?

I’m not a toy collector, but I had to have a Martian Warrior myself.

Warpo has stated they hope the figures will be available by December 2014. If that’s the case and assuming they’re reasonably priced, I may be dispensing them far and wide this holiday season…

Thank you. I endeavor to give satisfaction.

I missed those! Alas, I too would have liked to have added a Thark to the shelf.

John, I believe the inspiration was indeed that Tarzan TV show – which I’ve never seen.