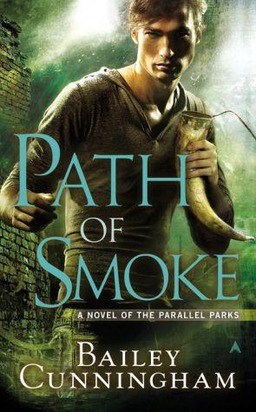 Bailey Cunningham’s Pile of Bones, the first novel of Parallel Parks, came out in July of last year and introduced us to Wascana Park, which transforms into the magical kingdom of Anfractus after midnight, and the group of ordinary university students who step inside and become a company of heroes — warriors, bards, and archers in a real-life role-playing game. (See our write-up from last August here.)

Now in the second volume, the stakes are raised and the team must learn to function without one of their most important members. Path of Smoke will be released late next month, which gives you plenty of time to get caught up with the first volume!

The company of heroes has thwarted the plan of the power-hungry basilissa to conquer Anfractus, but not without a cost. Andrew’s character, Roldan, died, leaving him cut off from the mystical realm without any memory of its existence. If the others reveal the park’s magical nature to Andrew, his banishment will become permanent. So they must hide their nighttime adventures — and hope that his memory returns.

Pursued by the basilissa’s forces, the rest of the group keeps a low profile in Anfractus until they uncover an unholy alliance between their enemy and the silenoi, satyrlike creatures who hunt humans — an alliance that threatens to cross the barrier into the real world.

And while his friends struggle to prevent an invasion in both worlds, Andrew receives a visitor determined to restore his memory of Anfractus by leading him down a very dark path…