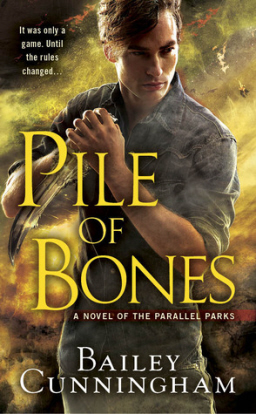 Usually when I’m looking for new reading material, I turn to one of my old favorites. Or I’ll try the latest novel by a BG contributor, or by an author I’ve met recently at a convention. It’s a rare thing these days when I crack open a book by someone I know absolutely nothing about. But sometimes I miss those days when the whole field was new and I approached every book with no expectations — nothing but a willingness to be entertained and transported. In those days, I was constantly delighted, surprised by almost every book I read.

And you know what? I think the two are connected.

Once upon a time, every author I tried was new and all I knew was wonder and magic. Now I read exclusively the same small circle of authors and very little surprises me anymore. So to recapture that wonder again, I try the simplest thing: I read new authors. Writers like Bailey Cunningham, whose first novel, Pile of Bones, first in the Parallel Parks series, was just released by Ace Books.

In one world, they’re ordinary university students. In another world, they are a company of heroes in a place of magic and myth called Anfractus…

The Cree called the area Oscana, “pile of bones,” a fertile hunting ground where game abounded. The white settlers changed that to Wascana. And centuries later, it became Wascana Park, a wooded retreat in the midst of the urban sprawl of Regina.

For a select few, who stay in the park until midnight, the land reverts into a magical kingdom, populated by heroes and monsters. They become warriors, bards, archers, gladiators. In the city called Anfractus, they live out a real-life role playing game.

All harmless fun — until they find themselves in the middle of an assassination plot which threatens to upset the balance of everything. Politics are changing, and old borders are about to disappear. The magic of Anfractus is bleeding into the real world — an incursion far more dangerous than the students suspect. Only they know what is happening — and only they can stop it…

Pile of Bones was published July 30th by Ace Books. It is 321 pages, priced at $7.99 for both the paperback and the digital version. The sequel is Path of Smoke.