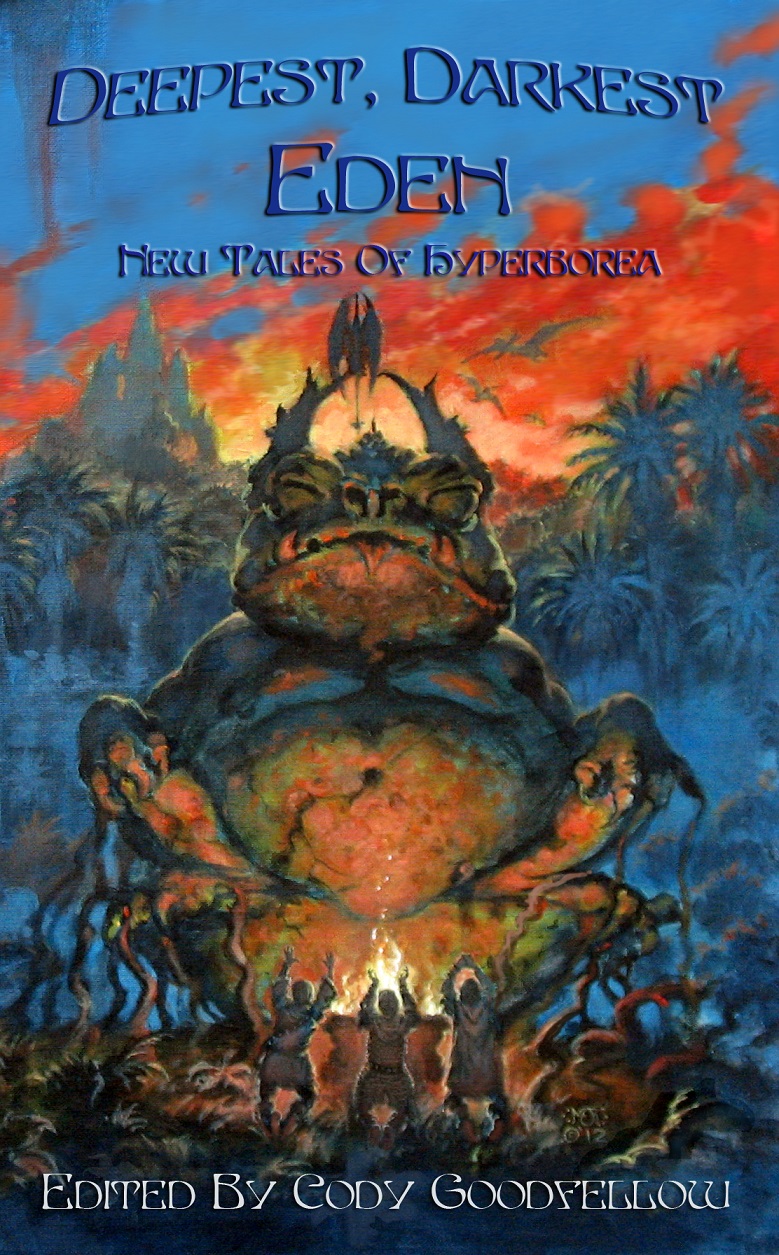 Although it officially launches this month at the Rhode Island NecronomiCon, the book is available right now through Amazon. Here is the Table of Contents:

Most of Smith’s original Hyperborean tales ran in WEIRD TALES in the 1930s. They featured lost cities, haunted jungles, strange sorcery, and terrible demon-gods such as Tsathoggua and Abhoth. His entire cycle of these tales was gathered into a single volume first in 1971’s HYPERBOREA from Ballantine Books, then again in 1996 for THE BOOK OF HYPERBOREA from Necronomicon Press.

(See the entire wrap-around cover after the jump…) 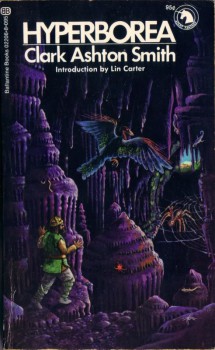 Smith’s Hyperborea wasn’t wholly his own creation, but his interpretation of an ancient Greek legend. “In Greek mythology the Hyperboreans were a mythical people who lived far to the north of Thrace…Hyperborea was an unspecified region in the northern lands that lay beyond the north wind. [It] was perfect, with the sun shining twenty-four hours a day.” (Wikipedia.org) Smith took this ancient legend and brought it to life in all the brilliant, shimmering colors of his fantastic prose.

He also introduced the idea that a terrible force of evil was slowly devouring the land with ice and cold, moving inexorably southward from the northern regions. In “The Coming of the White Worm”, Smith reveals that the icy doom is being caused by the alien entity Rlim Shaikorth, a vast white worm that the Warlock Evagh tries to stop. It is a true classic of the sword-and-sorcery genre that wasn’t published until 1941, and was a sequel of sorts to his two other “icy doom” stories “The Ice Demon” (1933) and “The White Sybil” (1934).

Smith could deliver sparkling fantasy adventure in the style of Robert E. Howard, but he avoided “happy endings,” usually preferring to have his “heroes” meet with horrible deaths at the end of their stories. This placed him closer to H. P. Lovecraft on the fiction scale, and indeed he stands right between Howard and Lovecraft when people talk about the “Big Three” WEIRD TALES writers. 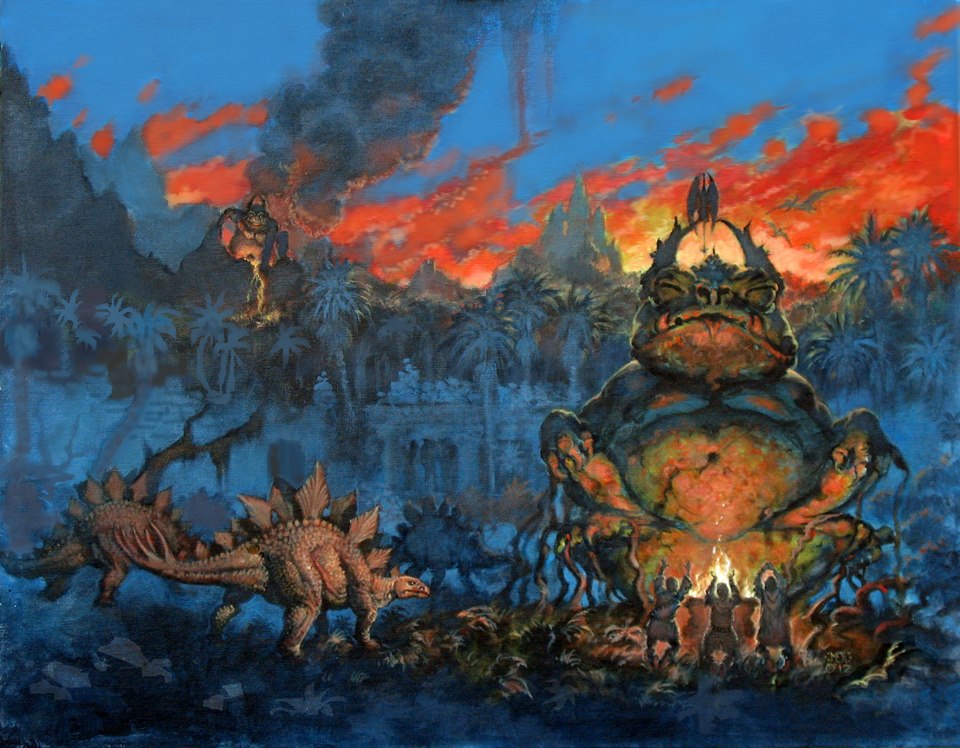 Ordered mine from MRP a couple of days ago. I almost want it just for the cover.

I’ve been keeping my eye on this on the MRP website for awhile wondering when it was coming out. Thanks for letting us know.

Just curious, do you ever listen to the Clark Ashton Smith podcast, The Double Shadow? They only have about 30 or 40 episodes and have slowly been going through Smith’s fantasy stories.

My pleasure! I didn’t know about “The Double Shadow” podcast but now I definitely have to check it out…

Yes, I do believe I need this — love the cover! (To say nothing of the table of contents.)

Talk about “Wow!” I frankly HAD to order it:-) It’ll arrive, possibly on my Birthday even!

Hopefully we can do a post on this 2 months from now so we can give opinions on the stories there. I’m particularly looking to John Fultz’s one…

I’ll rave for a Zothique, Posedonis and Xiccarph tale collection follow up if this turns out good. Actually they did the former, but it was a grossly expensive limited print run and never e-text released and languishes in the scalper market. But new tales could be made also:-)

A side note, but a suggestion, how about a Conan tribute? REH style “Blood and Thunder” stories with his anti-civilizaiton views, love of ancient cultures, etc.? The foundational stories are all public domain now…

(Although I have to admit that I’ve never quite understood why Xiccarph got elevated to the level of the other three — unless I’m missing something, there were only the two stories, one of which was a direct sequel to the other, and for some reason Lin Carter decided to use it as a BAF collection title. It’s a lovely, Smithian word, though.)

Joe H. -for Xiccarph being elevated we have the late Lin Carter to thank.

Lin Carter titled it in one of his CAS collections under Ballantine in a 1972 paperback printing. As far as I know CAS only wrote two stories there, “The Maze of Mal Dweb” and “The Flower Women”…

Lin Carter also did a tribute work to Xiccarph, “The Wizard of Zao” – heh I actually bought and read it before I knew about CAS and his works:-) If there is a publication on this we simply must ask the Carter estate to get permission to publish this in it.

Xiccarph was kind of like Zothique but not “Entropic” in that it was a thriving solar system with several inhabited planets, the chief travelers between were wizards who tended to be immortal and isolated, often tyrants but so beyond power they were more a menace by boredom based games. But there were lots of spells, gates, mutated creatures, etc. running around from that. And civilizations from near space age to stone age, human and non.

My later impression was “CAS wrote Zothique, Jack Vance got wow’ed out and wrote his Dying Earth stuff, then CAS read Jack Vance’s works, loved them and out did Vance Picasso level but croaked before could do more…” But it might be the other way and is likely neither, but fun to suppose…

I’d need to re-read his stories and search Eldritch Dark for any fragments, but Xiccarph might be a good “Shared universe” experiment for an e-pub, perhaps print. I think CAS mentioned just enough in the two very good finished and published stories more could be extrapolated from there.

He also wrote some stories in “Averoigne” some stories set in Mideval France. There was also “Vulthoom” his Mars stories, but again very sparse. “The Vaults of Yoh-Vombis” is a brilliant scary tale worthy of Zothique.

Yep — in some ways I actually think Xiccarph would be an even more interesting shared-world setting precisely because Smith wrote so little about it.

At one point I kept hoping for the long-promised Donald Grant Averoigne collection, but then Night Shade did Smith’s complete works, so I have all the stories even if they’re not united.

Did not realize that Zao was a Xiccarph tribute, but it totally makes sense now that you say it.