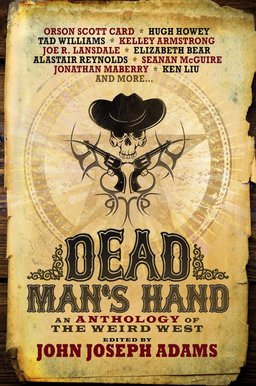 John Joseph Adams is having a good year.

Back in April, he was nominated for a Hugo Award for Best Professional Editor, Short Form (his seventh nomination), for his work as editor of Lightspeed, Nightmare, and anthologies like The Apocalypse Triptych.

That’s not his only triumph this year — far from it. His popular anthology Robot Uprisings (co-edited with Daniel H. Wilson) was released on April 8, and the special Women Destroy Science Fiction issue of Lightspeed has just arrived, and is being recognized as a landmark issue.

Dead Man’s Hand was published by Titan Books on May 13. It is 409 pages, priced at $16.95 in trade paperback and $9.99 for the digital edition. Read more details — and the complete book description — in my April 13 Future Treasures post.

Dang it! I was hoping to review this! 😉

I wonder when JJA is going to get some more love from the various SF&F awards. He’s quickly becoming one of the best anthologists in the business. I loved his Zombies and Epic anthologies. As far as I know he hasn’t gotten a Nebula or any of the other big ones. yet.

Still an opportunity to do a full review, if you’d like it. Want me to mail you the review copy?

“Want me to mail you the review copy?”

Seriously, does that question need a definite “yes”? You might as well ask an alcoholic whether you can buy him a drink!

That was the correct answer. 🙂

I’ll put the book in the mail for you this weekend. Can you email me your current address?