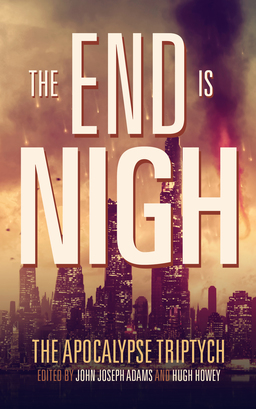 The end of the world turns out to be heartbreaking. Who would have guessed?

This anthology of end-of-the-world stories from two dozen big-name and up-and-coming writers is nothing like the Hollywood blockbuster apocalypse experience, all stirring music and flashy effects, tidily wrapped up with a life-affirming ending in under two hours. Nor is it much like the sprawling genre novels of cosmic disaster that we like so much. You could stack the dead characters in George R.R. Martin’s A Song of Ice and Fire like cordwood and get a wall longer than Hadrian’s, but we keep reading because there are still characters to root for, and moments of hope for a world that hasn’t altogether ended.

Adams and Howey’s planned three-volume anthology series The Apocalypse Triptych opens with a volume of stories that cover the moment the old world ends. A second volume, The End Is Now, will feature stories set in the midst of the chaos between, and The End Has Come will focus on the beginnings of whatever gets built from the ashes.

The structure of The End Is Nigh shapes a very specific emotional rhythm and, if you try to read the book straight through over a few days, a reading experience unlike any other I’ve had. Each author has come up with a different take on how the world might end, and each story presents a different vision of what the world that’s ending is like.

The viewpoint characters are all deliciously different from each other and their predicaments grow increasingly extreme in their deliciously different and often absurd ways, until the not-so-delicious moment when the worlds and stories end. No matter how funny, juicy, or satirically entertaining the story has been up to that moment, the world’s end hits like a knife to the gut. You’re still reeling when the story slams into its last sentence and ejects you before you can find some way to ask, But what happened next?

And then, dear reader, you turn the page and go through it all again. You try not to get too attached to the main characters, whose odds of survival two weeks past the final paragraph range from pretty slim to definitely toast.

You try to withhold a little of your empathy from whatever and whoever the main characters care about, because the whole premise of the anthology requires that most or all of what they care about will be lost or destroyed in the worst available way.

Alas, these writers are just too damn good. You’ll care. Your efforts to retreat into aesthetic consideration and assessment of writerly craft will fail. They’ll pull you in, these writers, they’ll make you laugh and see, and they’ll break your heart. 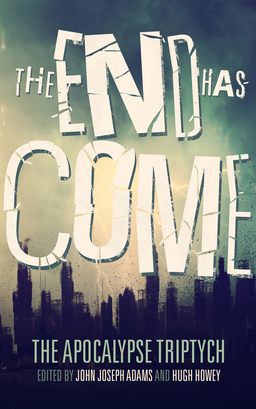 Whether this is a good thing or a bad thing is a matter of personal preference. Or maybe personal stamina. About a third of the way through the book, my willingness to poke my own amygdala with a stick gave out, and I could not read one more page. In about six months, I will probably remember the stellar quality of the stories I did make it through and then I’ll try dipping back in, a story or two at a time, over the rest of the year. However, I want to put out my endorsement-with-caveats early in the book’s life cycle, while it can do the most good.

Some of these stories will make it onto the award ballots and into the year’s best anthologies, and deservedly so. The anthology as a whole will probably be up for best anthology on some ballots, too, and I’ll be rooting for Adams and Howey. Taken one at a time, some of these stories are as much fun as, and way smarter than, any asteroid-filled effects extravaganza you can popcorn your way through.

Just don’t try to read The End Is Nigh in a weekend reading binge, or a weeklong one for that matter. If you’ve been thinking for a while that maybe you would benefit from taking antidepressants, don’t start reading until you have your prescription filled. Not just in hand. Filled. Don’t start reading after a bad breakup, or after you get laid off from your job, or in the exact moment when a sizable real-world country erupts into blazing civil war.

An old professor of mine used to lament about the necessity of assigning really long novels over short periods of time. “Reading Wings of the Dove in one week is like chugging a bottle of Bailey’s Irish Cream,” he would say. Not that I’ve ever tried to do anything that unnatural with Bailey’s, but it always seemed like an apt comparison to me. In that spirit, as it were, I recommend some pairings for your reading of The End Is Nigh, so you’ll have something useful to do with the restless pacing and free-floating sense of urgency these stories will elicit from you.

Before you order the anthology, get yourself a copy of Kathy Harrison’s Just in Case: How to Be Self-Sufficient When the Unexpected Happens and Creek Stewart’s Build the Perfect Bug-Out Bag. Having followed some advice from each of those books served me well while I weathered Hurricane Sandy in New Jersey. If the world ends before you get the batteries loaded in your flashlights, well, at least you’ll have slept a little easier between bouts of reading The End Is Nigh.

I saw Hugh post about these on his Facebook page. John Joseph Adams is a great editor, and while I don’t know how Hugh Howey is as an editor, he’s easily one of the best writers to come along recently.

O’Neill points out, quite reasonably, that it’s weird to have a review of an anthology that doesn’t get specific about any of the stories. Robin Wasserman’s “The Balm and the Wound” is a brilliant tale of a scam artist preacher who accidentally got it right about the date for a lower-case-A armageddon. What Wasserman does with theological idea of the deus absconditus is hilarious and deep.

Desirina Boscovich’s “Heaven Is a Place on Planet X” opens with a scenario so ridiculous that the horror of the main character’s situation only gradually creeps up on the reader.

A kid who’s been raised all his life to be a stuntman narrates Charlie Jane Anders’s “Break! Break! Break!” His high school filmmaking exploits are charming, innocent, and nutty, right until he gets mixed up in a resistance movement’s propaganda project, and then everything goes downhill fast.

In “The Gods Will Not Be Chained,” Ken Liu delivers one of the few truly hopeful stories I made it through. It’s a melacholy, poetic story of familial devotion strong enough to overcome all boundaries.

“Wedding Day” by Jake Kerr follows a same-sex couple’s progress toward their nuptials, which they plan in parallel with their country’s logistical scrambling as an asteroid spins toward Earth.

In Tananarive Due’s “Removal Order,” a devoted granddaughter tends her bedridden grandmother while their city evacuates around them. The grandmother is dying of plain old-fashioned cancer, and staying housebound with her has protected the granddaughter from exposure to a flu pandemic. The ending of this one is hopeful, but at such a cost, so keenly conveyed, that I could not face the ARC for one more minute.

Had I written the review at that moment it would have gone like this:
Gah! Yeep! Tissues? Um, buy it anyway.
::burrows into the kids’ blanket tent to hug them until they squeak::

Ya have to admit, death by an asteroid is at least an interesting way to go.

REVIEW: “Some of these stories will make it onto the award ballots and into the year’s best anthologies, and deservedly so.” : The Apocalypse Triptych

[…] Black Gate reviews THE END IS NIGH: “Some of these stories will make it onto the award ballots and into the year’s best anthologies, and deservedly so. The anthology as a whole will probably be up for best anthology on some ballots, too.” [review] […]

Wild Ape, the death by asteroid story reaches a weirdly celebratory mood by the time there’s fire in the sky.

Awsnyde, I’ve been admiring Adams’s editorial chops since he was Gordon Van Gelder’s minion, all the way through is progress to his current status as King of All Anthology. Haven’t read Howey yet, but he’s been on my TBR list for a while now.

[…] Back in April he was nominated for a Hugo Award for Best Professional Editor, Short Form (his seventh nomination), for his work as editor of Lightspeed, Nightmare, and anthologies like The Apocalypse Triptych. […]