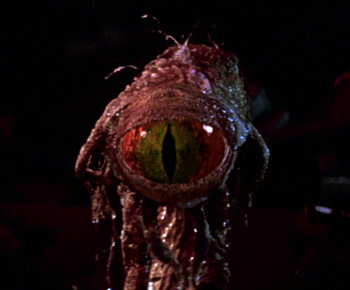 Of course you’ll recall the Death Star scene in Star Wars when our stalwart heroes escape the Storm Troopers by blasting open a panel, jumping down a chute, and landing in a trash compactor.

“The garbage chute was a really wonderful idea. What an incredible smell you’ve discovered!”

And then the walls start closing in. But not before our heroes discover that there’s something else in that there garbage, leading Luke Skywalker to observe:

“There’s something alive in here!”

…That is, another life form besides a princess, a farm boy, a space pirate, and his wookiee sidekick. Something that is only glimpsed — specifically, a tentacle and a single eye stalk.

God, I loved that scene.

What was that thing? It is usually simply referred to as the trash compactor monster, but seeing as how virtually every aspect of the Star Wars universe has been fleshed out via franchise tie-ins, it turns out it’s a “dianoga.” According to Wookieepedia, the Star Wars Wiki, it is not unique: dianogas “could be commonly found in trash compactors, garbage pits and sewers” and are “sometimes referred to as a garbage squids, sewer squids, or trash monsters.”

I had the original 1978 trash compactor set. Essentially a plastic box, it had a knob that rotated a screw to make one wall close in. In lieu of garbage, it was loaded with colorful bits of foam. When the foam, along with a couple of your favorite action figures, was sufficiently compacted, the door would pop open, spelling freedom for whomever you’d tossed in there.

It also came with the monster. 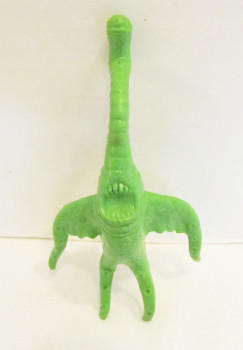 How closely Kenner’s design actually matched the filmmakers’ conception of the creature is, well, open to debate. They went with a green thing with a single, long eyestalk (that part isn’t hard to decipher — it’s the only part of the creature you really get a look at) attached to a fish-like body with two flippers and two trailing tentacles. Its mouth is on the underside of its body, and it has a dorsal fin. Incidentally, those tentacles look pretty short and stumpy, considering that in the film they were long enough to wrap around a person and drag him under.

In recent years I’ve re-acquired two trash compactors, but I’ve not yet been able to hunt down a dianoga to inhabit them. Both compactors still work, and one has foam “space garbage.” Not the original foam, mind you, but custom replacement foam. Whatever Kenner used to make the foam out of back in the day, any that’s still around has deteriorated into a mushy mess (the quicksand in the Dagobah Cave set did the same thing). One eBay seller has already sold 32 units of replacement foam at seven bucks a pop. 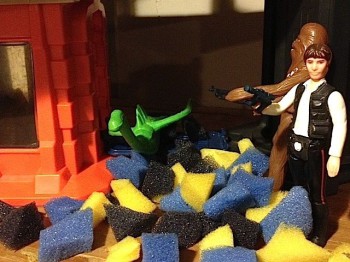 But I set myself a limit of $15 for the monster. I’ve bid on them numerous times on eBay, but they have always gone for $20 or more. And they seem to be going for more each time (Star Wars toys in general are having a bit of a price surge in anticipation of the franchise re-launch).

Someone was selling one the other day with an opening bid of 99 cents — but the eyeball was decapitated! Its most notable feature had been bitten off or something, so I wouldn’t settle for that. I never did see if it sold.

In the meantime, I’ll keep my eye out for the trash compactor monster. Well, no, I’m actually going on eBay-hunting hiatus for a while. (Is my wife reading this? I swear, honey, I’m not going to buy any more monsters for a while.) I just hope that the next time I check in, the price is a little more compacted.

>I just hope that the next time I check in, the price is a little more compacted.

Except that you just told everybody how rare the thing is…

I watched the audio commentary that George Lucas and carrie fisher recorded and the monster had the name dianoga before they even started shooting.

There was a funy story about mark singing songs about the dianoga in between shooting scenes in the trash compactor.

Glenn, I’ve never watched with commentary, but I’ve heard or read the same thing- I don’t remember where or when. If memory serves I believe that the name dianoga was originally for the Jedi and Lucas liked it well enough he didn’t want to completely scrap it. Either way, I’m with you nick on this being a really great scene. Helluva of a way to bring all the leads together.

Just wishful thinking, anyway. The only way the price is going to go down on the old Star Wars stuff is if the new movie sucks so bad it kills the franchise.

Thanks for the info. Now that you mention it, I probably heard that at one time too. I wish someone on the crew had caught Mark’s dianoga songs on audio. That would make a hilarious bonus feature!

It is a shame that this is not a real beastie that one could train as a house pet. Think about the possibilities. You would have a house pet that wouldn’t be dragging things out of the trash, it would be dragging trash into its heap. It seems to be of at least dog like intelligence. Perhaps one could train it to take the trash cans out to the curb on Tuesdays and Thursdays.

I never regretted taking the action figures out of the box. It was worth the bizzillion dollars that I would have made putting them up on Ebay.