Swords and Sorcery Magazine #27‘s first of two stories, “Wolves,” is only the second English language story by Brazilian writer Cesar Alcazar. It continues the adventures of renegade Irish swordsman Anrath the Black Hound, whom he first introduced in “A Lonely Grave on the Hill” (HFQ #118).

The only flaws in the story are some iffy word choices which I attribute to Alcazar writing in English, not his first language. For example, we’re told a man “laid” his cup on a table, though it was clear that the cup was set down on its bottom. Those few minor details aside, this is a clever story.

The second, “The Best Intentions,” is Benjamin Darnell’s first published story. It starts as a somewhat humorous tale of Aidan, student of the apothecarist Edwin, sent out for magical ingredients. It becomes a darker, violent story as things start to go wrong for the young apprentince. It’s a laudable first effort with some thrilling bits, even if its setting is overfamiliar.

I never know what to expect with Beneath Ceaseless Skies from issue to issue. The editors take chances, never allowing themselves to be bound to a single style or genre of story. Some of the best stories I’ve read in years have come from the electronic pages of BCS. There have also been plenty I haven’t liked. In between are those I find more interesting than enjoyable.

“Our Fire, Freely Given” by Seth Dickinson in BCS #145 falls squarely in that middle category. Rider Bray is the first member of the conquered Horse People to be elevated to the rank of şövalye (Turkish for knight). Rider Bray and the realm she serves are slowly losing a war against the forces of the King of Emmer Wheat. The war itself is fought by individual şövalye imbued with power from their retainers.

Rider Bray is sent to evaluate radical new tactics which may offer the hope of drawing victory out of imminent defeat. At first dubious, she soon realizes that not only are the tactics truly radical, so is their developer, Marantic Lind. The question of what she should do and what will happen to the realm become the heart of the story.

There’s a lot going on in “Our Fire, Freely Given”; perhaps too much. It’s an incredibly dense and creative story that needs more space to expand and explain things. As it is, it feels a little abrupt at times. In particular, Rider Bray isn’t given time to come to life, leaving her too distant for me to really care for.

Alex Dally MacFarlane’s “Women in Sandstone” is about a general making a pilgrimage to a series of temples dedicated to the winds to make offerings in exchange for the power to restore her realm. Her encounters with the winds in their temples are too dreamy and obscure for my tastes, but I was curious enough to want to know how things turned out.

Heroic Fantasy Quarterly #20 finally made its appearance, which always makes my week a little happier. As usual, the selected stories hew pretty close to the title on the masthead and, as usual, the editors have made some good selections. 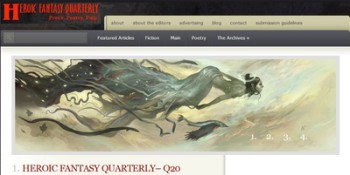 Thirty-six years ago in his essay “Thud and Blunder” in Swords Against Darkness III, Poul Anderson wrote that too many world cultures were neglected in favor of using the same old mishmash of European models. That’s still the case. So I’m always happy when a writer, in this case, Evan Dicken, avoids the standard fantasyland setting. “Mouth of the Jaguar” is an exciting excursion into Meso-America with Lovecraftian undertones. Sometimes I just want a nice adventure story, but it’s always cool when the author offers a change-up to the usual presentation.

Hummingbird is a warrior from the now destroyed kingdom of Tenochtitlan. In her world, it wasn’t Cortes who did the great lake-city in, but some sort of priesthood from the sea. Its members should be recognizable to fans of HPL:

A black-robed man stepped from the shadow of the door. Hair like wet seaweed framed a long, pallid face. His nose was little more than two slits, and his bulging, watery eyes were so large that he seemed to have no brow at all. At his approach, the air in the room grew thick with the stench of low tide.

After escaping the clutches of the priests of Tarasc, Hummingbird is dragooned into an expedition to recover a magic dagger from a temple in a ruined city. The city’s name, Tamoachan, might sound familiar to old time role-players.

I really appreciated Dicken’s willingness to make Hummingbird a typical representative of her culture and not some modern day reconstruction. While awaiting to be sacrificed to the gods of Tarasc, we learn that guarding such events in Tenochtitlan was one of her past duties.

Although they had been the enemies of her people for generations, the Tarascans shared much with the Azteca. If not for the guards holding her arms, Hummingbird might have even imagined herself back in Tenochtitlan as it was before the fall.

“By Way of the Eastern Road” by Jesse Knifely is about an indentured kitchen-boy’s dangerous escape from his life of drudgery and abuse. Other than the fictional setting and a cannibal cult, there’s nothing to mark the story out as fantasy. There’s also nothing really new about the story, but it’s well crafted. I could easily see further adventures for Ren and would be curious to see where they lead.

The final story is “The Challenger’s Garland” by Schuyler Hernstrom. Molok is the undefeated champion of the God of Death. A dream has caused Molok to seek an audience with his dark lord:

Molok’s otherworldly voice carried over the sound of crashing waves. “I dreamt of a white citadel.”

“A white citadel? Most interesting.”

“A castle of white stone, atop tall cliffs where wyvern nest and the sea meets the land. On the drawbridge a champion in white armor chased in gold stood waiting.”

Locken stroked his mandibles with a gnarled claw. “He speaks of the fortress of Azal, the seat of Triment, one of the kingdoms that still denies the inevitability of your rule, my lord.”

I believe you are correct, dear brother.” The sea-elf stood to face Molok. “Well, Black Knight, I give you leave to seek out this fortress. Ride under my banner and wear the garland as champion and emissary. Slay the champion of Azal. Surely this is the meaning of your dream.

After following Molok’s journey, the perspective switches to that of Lobon, Champion of Azal. He, too, has been plagued by troubling dreams. When the two finally meet, it is like two thunderclouds shattering a clear, quiet day. Even though the beginning reminded me of Michael Moorcock, I like this one very much.

Other than HFQ, I’m not sure where else a reader can find S&S-tinged poetry.  Real sagas were told in song and poem and these writers are helping maintain a link to that past.”Taming of the Beast” by Brinsley Gale is about a knight and a dragon. “The Sword” by Cullen Groves is a conversation between the warrior Oswulf and his sword.

So go click those links and read those stories, people. Let the magazines and authors know there’s an interested audience for the good labors they’re doing in the fields of heroic fiction. There is plenty of fun work out there to be read.

Thanks for the heads up. I’ll check the sites out.

@ Wild Ape – You’re welcome. There’s plenty of topnotch short heroic fantasy being crafted right now and the best place to find it is in the e-zines.

@ A Simmons – “Jaguar” was such a fun mix of things. Hope Hummingbird makes further appearances.