Fourteen years ago, I taught my first college-level writing class. Let’s face it, I was very 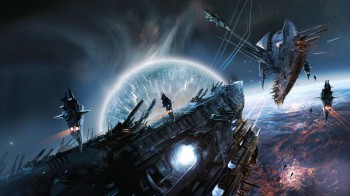 green, an adjunct hired to fill an unexpected gap in the wake of a fast-departing faculty member. Whether I did well or poorly I do not claim to know, but of my eleven students, two had their final projects subsequently published, and one went on to get an M.F.A. in creative writing (which means he’s now flipping burgers in your local Mickey D’s, so next time you’re there, be nice).

The other fact of which I’m sure is that my toss-the-feathers syllabus mixed fantasy and literary readings. Yea and verily, it’s a wonder I wasn’t burned as a heretic — but perhaps the resident firemen, Montag & Smaug, Inc., were extra busy that season.

I’m now on my third go-round as a writing teacher, and while my reading selections remain whimsically mixed, I do have one fresh challenge on my plate: for the first time, I have a student invested in writing out-and-out science fiction. And not just any sci-fi, we’re talking guns-a-blazing space opera.

By the glowing rings of Saturn, what am I to do?

My (anonymous) student first approached me with her story idea as if she needed permission and would not receive it; despite my syllabus, which includes Alice Sheldon, H.P. Lovecraft, and Karen Joy Fowler, she seemed to think crafting sci-fi might be criminal, or at least a mark of poor taste. Of course I encouraged her, but I also said, in what I think now was much too off-hand a way, “Science fiction is very difficult.” 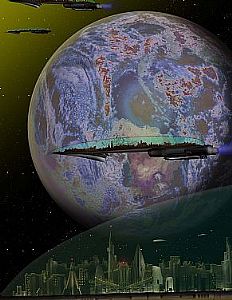 In my life as a playwright, the only form I’m a-feared of is farce. It’s unforgiving, a mechanistic nightmare.

In short fiction, I am similarly leery of sci-fi. The world-building component gives me the Romulan heebie-jeebies. I like to think I handle exposition with adroit grace, but by the polar caps of Mars, I have trouble handling the informational demands of straight-up science fiction.

It’s not that I haven’t published my share. One piece I’m proud of, “Empathy Rocks,” may be found HERE, at Electric Spec. But it’s not a genre I tackle lightly, and for this student, I fret that perhaps this makes me a less than stellar mentor.

What am I supposed to say? “Go back, young lady. Here there be laser powered dragons. Better to imitate Jane Austen, or maybe Edward Abbey. Even Tolstoy would be easier.” 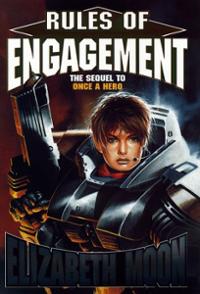 The story in question is perhaps 3,000 words long and comes complete with an inhospitable planetoid, shape-shifting fugitives, and surly intergalactic police.

My job: push the story along while forcing my student to provide the following essential information: Who are the main characters? Why are they on vacation together? How did the fugitive on board the ship get there? Why should we trust (or not trust) the jailbird fugitive when she/he/it claims that those on board will come to no harm if they simply trust in what it/he/she says?

(Possibly I should also insist on a better grasp of physics regarding the particular nature of the dangerous local planetoid, but this is not a graduate level class, so I believe forbearance is an appropriate strategy.)

You see the conundrums here, the minefields.

Now add in the physical specifications of the outer-space component, at least two alien cultures, a potential Babel of languages, and all sorts of nomenclature issues. The number of worlds my student might have to elucidate in order to make comprehensive sense of her scenario could very well be infinite.

Yeah. Science fiction is difficult. There’s so bloody much to do!

Solution-wise, Annie Lamott’s essay-writing advice springs to mind. “Just take it bird by bird,” that’s what she’d say, with “bird” standing in for whatever subject lies at hand. And she’s right, of course. 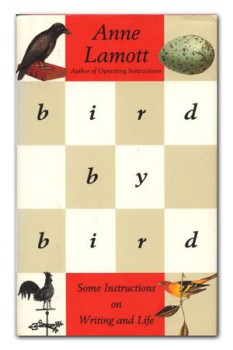 What my student needs to do is exactly what all her fellows need to do, plus a little extra. The opening steps are clear enough, and go something like this:

1) Create a character with a specific need, and have that character encounter difficulties in pursuing an equally specific goal.

2) Describe, vividly, the surroundings in which the story takes place.

3) Structure the proceedings in such a way that we have a beginning, a middle, and an end, preferably with a climax of some sort near the end, one where the character either succeeds or fails.

4) Trust in compression. No story tells or describes everything. The key is to find what will best stand in for the whole. (There’s a reason “synecdoche” remains in the dictionary.) Say what needs saying, and nothing more, but use language appropriate to your tone, character, and intentions. Readers will fill in the rest. 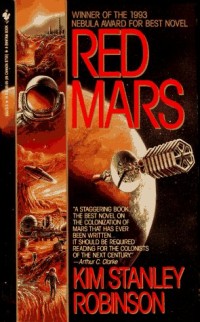 Note that these general precepts are as true for John Updike as they are for Kim Stanley Robinson or Elizabeth Moon. Realism doesn’t enter into it; fantasy doesn’t enter into it––and neither does science fiction. The key in most (though not all) great story-telling is to depict characters with whom we sympathize and situations with which we identify.

Nothing to it, really.

As for the seemingly endless world-building requirements that science fiction demands, it’s a matter of judicious balance. My advice to my student will come down to this: don’t answer every question right out of the gate. Let a few queries linger. It’s okay that we don’t understand the world perfectly at the outset; let context guide us, and also confidence. If she, as author, presents her world with the surety of one who walks through it daily, the little discrepancies of her particular environment will sort themselves out naturally, through the action of the story and its characters. Bald-faced exposition will almost never be required.

And this, too, is true for stories in general, not just for the unending worlds of space opera.

Could it be that fate has placed this student in my class not for her betterment, but for mine? To scrub away the last of my fears about crafting cunning, approachable science fiction?

Let’s face it: at the end of the day, the word “science” is only part of the puzzle, a modifier slipped lightly over the ring-finger of fiction itself.

What could be simpler?

Where were you when I was taking writing courses in college? My short story assignments were almost invariably genre fiction. As I recall my instructor – while giving a more than satisfactory grade – wrote in his evaluation that I reminded him of a talented chef kidnapped by humorless McDonalds managers and forced to recreate the Big Mac. Subtle, no? Genre fiction is the equivalent of fast food. If he meant to discourage my penchant for genre fiction or to nudge me toward “Literary” writing, he failed.

This post, and Ken’s comment, broke back a memory and a chuckle. Lo those many, many moons ago when I was a lowly undergrad, I took part in several creative writing classes. During my first class, my first story was a fantasy tale about a unicorn hunt. The response from the professor and from the majority of classmates was similar to Ken’s experience above. It was even strongly suggested to me that I try something “serious,” something literary.

My response was to take a page from John Lennon’s playbook, specifically his supposed response to his lyrics for “I Am the Walrus.” Apparently Lennon was miffed at critics trying to find messages and the like in his lyrics, so about “Walrus” he once said something along the lines of, “Let them figure that one out.”

So I followed the same thinking. My next story was so radical and “out there,” that I knew it was a piece of garbage, just fluff I made up off the top of my head without any real story at all, though there were a few central characters.

The class loved it.

Yes, that’s exactly the blessing of students. My first batch taught me to revise. They did this funny thing I’d never tried: they followed advice from their writing teacher. And it actually worked! I had just been saying the thing writing teachers say, but up until then my chops had always been just good enough for me to get away with handing in first drafts as if they were finished. I watched my students do amazing things, and said to myself, I’ve gotta get me some of this revision stuff.

If it hadn’t been for those students, I’d have had no idea what to do with O’Neill’s revision requests, and I’d probably have been without a first professional sale to this day.

Ken – At least your instructor had a funny bone! “Talented chef kidnapped by humorless McDonald’s managers…” I love that. Although I imagine that at the time, that stung like anything. Harve Bennet (Star Trek II, III, IV, etc.) once accused me of “writing light.” He was correct. I needed to hear that. It stung.

Ty – Unicorn hunting remains the national sport of Grand Fenwick. Or so I hear. The fact that your class loved your follow-up piece is further proof that experimental fiction remains almost impossible to judge, and that the crazier something is (like much of contemporary art) the farther adrift from critical standards we go. Sometimes this is wonderful. And sometimes it leaves us mired in endless reductive kitsch.

Sarah – Advice: the ultimate double-bladed vorpal sword. What’s good for the goose…and so on. But yes, we all gotta get us some of that good ol’ home-cooked advice. : )