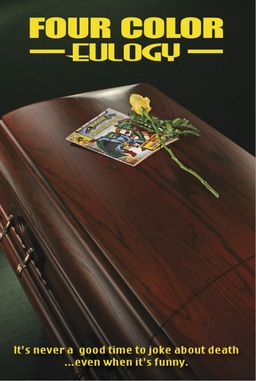 This is as excited as I get about anything.

Back in February, I told you about a new project by our favorite indy film geniuses at Pirate Pictures, in which comic collectors finally get to be the film heroes — far overdue if you ask me.

And yes, the Black Gate crowd went wild over the idea – or as wild as you all get about anything.

So a couple weeks ago, I undertook a road trip to visit the creative team and ask them some questions about the inspiration for Four Color Eulogy; like how it happens that a bunch of comic fans were able to turn their passion into an actual movie?

I figured we’d sit around in a slightly grungy coffee shop and I’d capture all their witty banter on my handy digital recorder, then hustle home to Chicago and type it up for you.

But no. We’re way beyond grungy coffee shops now…

Instead, they suggested we meet “at the studio.”

And oh, by the way, why don’t we just roll out the actual movie cameras and film the interview instead?

Lighting? Sure! Sound guys? We’ve got plenty of them.

Minions who will actually bring you a coffee and an extension cord should you need one?

So off I went to “the studio” and there were indeed ginormous movie cameras and lighting guys and key grips and all manner of resources you see named at the tail end of all movie credits.

We did sound checks, we adjusted camera angles and a cute boy with huge headphones around his neck fetched me a comfy chair and an extension cord.

This might be the pinnacle of my Black Gate career. I’m not sure…

But the result was that I get to bring you Black Gate’s first ever, professionally filmed Goth Chick News exclusive interview with the creative team behind Four Color Eulogy.

And it is cool. Very cool. Watch it in full-screen mode if possible, you’ll see what I mean.

In the name of full disclosure, I did the editing and the graphic animations, so don’t blame Pirate Pictures for any of that. One might argue that to tamper with professionally shot footage is sacrilege, but then I would have to remind one where one is…

The Four Color Eulogy team has promised we can continue to get behind-the-scenes access once production is in full swing this summer, so stay tuned. In the meantime, check them out on their web site or on Facebook.

I’m definitely hitting up John for a bigger office, above street level…

That’s some good news. I look forward to watching it.

Counting on you to send up the proverbial “Ape Signal” and spread the word.

[…] Goth Chick Sue Granquist from Black Gate was visiting St. Louis and took some time from her travels to visit with the Four Color team. […]