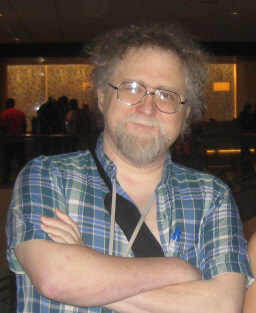 Aaron Allston, one of the most creative and prolific creators in the early adventure gaming hobby, died Thursday.

I first encountered his name in the early 80s, on the masthead of my favorite gaming magazine, Space Gamer, where he seemed to do just about everything — circulation manager, assistant editor, and eventually editor. When the magazine split in two in 1983, he also served as editor of the spin-off Fantasy Gamer.

By 1983, he was also an accomplished freelance game designer with a number of impressive credits, including Autoduel Champions, a mash-up of Hero Games’ Champions and Steve Jackson Games’ Car Wars. His many later credit included the Hollow World box set (TSR, 1990), Rules Cyclopedia for Dungeons & Dragons (TSR, 1991), The Complete Fighter’s Handbook (TSR, 1993), and the Fifth Edition of the Champions rules (Hero Games, 2002).

By 1990, he was working in the computer gaming industry at Origin System, publishers of Ultima and Wing Commander, where he co-wrote the acclaimed Savage Empire, named the Best PC Fantasy RPG of 1990 by Game Player magazine.

He eventually found his greatest success in fiction, beginning with the Baen novel Galatea in 2-D in 1993, followed by the second Car Wars novel Double Jeopardy (1994), Doc Sidhe (1995), and two Bard’s Tale novels co-authored with Holly Lisle. In 1998′ he published his first Stars Wars novel: Star Wars X-Wing: Wraith Squadron. He wrote four more in that series, and a total of 14 Star Wars novels, including three volumes each in the Fate of the Jedi, Legacy of the Force, and New Jedi Order series.

In April 2009, Allston suffered a heart attack and underwent an emergency quadruple bypass surgery. On Thursday of this week, while attending VisionCon in Springfield, Missouri, he collapsed and later died of apparent heart failure. He was 53 years old.

I can’t believe there were no comments on this post. Aaron was too good a writer and too important to the fantasy and science fiction genre not to have someone post concerning his loss. I had the chance to correspond with Aaron on several occasions last year concerning work for Skull Island Expeditions. Although we could never work out a deal, it was still a genuine pleasure to speak with him and he will be greatly missed.

Was very sorry to hear about it. I didn’t realize Hollow World (another of my favorite TSR settings) was one of his.

> Aaron was too good a writer and too important to the fantasy and science fiction genre not to have someone post concerning his loss.

I always followed his career with great interest, mostly because of the Space Gamer connection. You never forget the writers who introduced you to the genre, and Aaron was one of the greats.

> I didn’t realize Hollow World (another of my favorite TSR settings) was one of his.

To be honest, I had forgotten about it myself until I started to pull together my notes for this article.

There were a lot more classic modules and games I could have added to the list. Check out this list of his books at Amazon… you’ll be astounded at just how many titles there are (well over 200). I know I was.

John — Yep, after looking at that list he has an awful lot of shelf space in my wall full o’ RPG supplements.

(And I do have a bunch of his Star Wars novels; just never quite got around to them. Perhaps it’s time.)

I hope you enjoy them, Joe.

[…] lost prolific game designer and author Aaron Allston last week and, as often happens after we lose someone of importance in the industry, I find myself […]