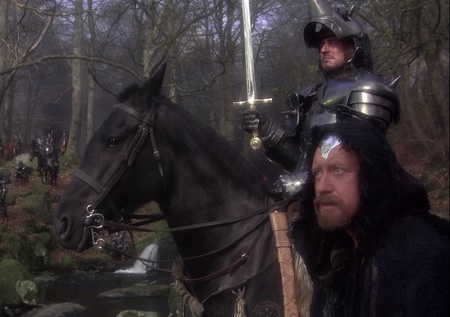 “I’m trying to suggest a kind of Middle Earth, in Tolkien terms. It’s a contiguous world; it’s like ours but different.”
— John Boorman, on Excalibur

As I began poking around into the history of Arthurian film adaptations, I was surprised to find a lot less of this sort of thing than I was expecting.

Good old Wikipedia lists 36 “relatively straightforward adaptations” made between 1904 and 2009. Many of these are rather obscure, to say the least, and quite a few deal with tangential aspects of the core legend, such as the stories of Arthurian knights, Parsifal, Launcelot, Gawain, and Galahad.

The earliest so-called adaptation is one of those tangential ones, Parsifal (1904), in which Thomas Edison’s thriving production company essentially just filmed a few scenes from Richard Wagner’s 1882 opera of the same name. Over at IMDB, they list a total of 46 features which star King Arthur. He seems to have first appeared on film in Launcelot and Elaine (1909), which explores a thwarted romance involving Launcelot, as detailed in Lord Alfred Tennyson’s epic poem, Idylls of the King.

I have to admit that I don’t have much use for any of the Arthurian flicks made prior to 1981. 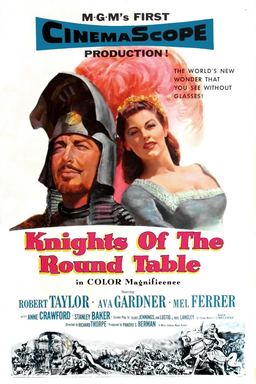 Among the many of these are The Adventures of Sir Galahad (1949), a serial that starred George Reeves, who most of us probably know best as one of the early incarnations of Superman. Other early versions of the legend include Knights of the Round Table (1953), which starred Hollywood biggies Robert Taylor, Ava Gardner, and Mel Ferrer as Launcelot, Guinevere, and Arthur.

Then there’s one of the better known adaptations of yesteryear, Camelot (1967), in which the cast spends much of its time cavorting about and bursting into song and which I wouldn’t sit through if you had a gun pointed at my head.

In the post-1981 era, there were a few high-profile versions of the legend committed to film. First Knight (1995) found Richard Gere portraying Launcelot as a swashbuckling heartthrob and Sean Connery as a rather long in the tooth Arthur. It was a passable entertainment at best.

King Arthur (2004) fares better, even though it strips away most of the elements that make up the actual legend and presents Arthur as a Roman commander in Britain and his knights as a band of mercenaries embarking on one last great mission.

Some other versions of the legend tend to stray even further from the story most of us know. They include Monty Python and the Holy Grail (1975) and zombie guy George Romero’s Knightriders (1981), which moves things to the present day and has the good knights riding around on motorcycles. The Fisher King (1991) was also set in present day and succeeds or fails (depending on your perspective) in spite of the fact that Robin Williams co-starred.

Also worth mentioning, The Mists of Avalon (2001), a mini-series which brought Marion Zimmer Bradley’s twist on the Arthurian tales to the small screen. And of course there was Shrek the Third (2007), in which none other than Justin Timberlake gives voice to a character called Arthur “Artie” Pendragon, while Monty Python alumnus Eric Idle starred as Merlin. 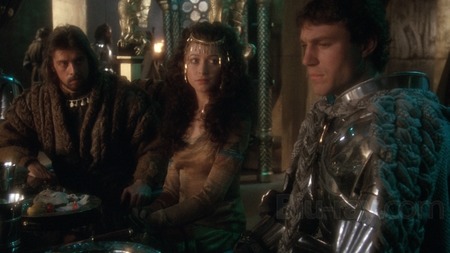 But it was in 1981 that the “One Arthurian Film to Rule Them All” (my phrase) made its debut. That was, of course, Excalibur, which was directed by John Boorman and which is arguably the best of all Arthurian adaptations.

That Tolkien reference is not accidental, by the way. As the story goes, in the late Sixties, during a previous wave of Tolkien-mania, Boorman got it into his head to film Lord of the Rings and even went as far as to write a script before the project fell to pieces.

Boorman went on to do the film that he’s probably best known for, Deliverance (1972), and then made a science fiction flick that starred Connery, Zardoz (1974). The somewhat dubious Exorcist II: The Heretic (1977) followed and then Boorman turned his attention to tackling the tales of Camelot, co-writing Excalibur‘s script with Rospo Pallenberg, who worked with him on the Exorcist sequel and later on The Emerald Forest (1985).

Excalibur‘s core characters — Arthur, Merlin, and Launcelot — are portrayed by a trio of actors — Nigel Terry, Nicol Williamson, Nicholas Clay — who were probably not familiar to most American viewers. However, a number of lesser characters are portrayed by up and comers who are considerably more recognizable today. They are Helen Mirren, Patrick Stewart, Gabriel Byrne, and Liam Neeson.

There’s probably no such thing as an authoritative version of the Arthurian story, be it in print or on film, but working with Thomas Malory’s Le Morte d’Arthur (Boorman once referred to him as “the first hack writer”) as their source material, Boorman and Pallenberg managed to cram in many of the familiar elements of the legend most of us know so well into a mere 140 minutes of running time.

So to hit the high points, we have Uther Pendragon conspiring with a reluctant Merlin to seduce the wife of a fellow king. Merlin demands the child of this union – Arthur – and outsources his care until the future king is in his teens and accidentally pulls Excalibur from the stone his father shoved it into upon his own death.

After Arthur and his good knights bring peace to the land, Arthur wrecks things by getting flustered and breaking the sword during a battle with Launcelot. Who proceeds to get together with Guinevere and the peace of Camelot is further shot to hell.

After that, the good knights ride out in search of the Grail, in hopes of saving the kingdom. It falls to Perceval to do so and finally Arthur, Launcelot, and the rest of the knights gather for one last battle against the thoroughly black-hatted Mordred, spawn of Arthur’s unwitting union with his half-sister Morgana. Everyone bites the dust except the King and Perceval, who, when he finally obeys Arthur’s instructions to return the sword to the Lady in the Lake, returns to find the King being hauled off in a boat to Avalon.

None of which seems terribly impressive in a printed synopsis, but Boorman and his crew bring things to life in a very impressive manner with striking visuals and a score that mixes stirring snippets from Wagner and Orff’s Carmina Burana (before that became a bit of a cliché) with a score by Trevor Jones. While not a perfect piece of cinema, I fail to see how it could be improved on very much.

Movie industry trade paper Variety agreed and was about as effusive as you could be about a film, remarking that

But I was surprised to find, as I dug into the history of Excalibur, that there were a number of high-profile reviewers back in the day who were decidedly less than impressed with it. Roger Ebert said of it, “What a wondrous vision Excalibur is! And what a mess.” Vincent Canby, then the critic for the New York Times, was even less charitable, calling Excalibur “virtually a one-film Ring cycle that seems 10 times as long as the Wagner work” and “a beautiful, uninhabited, primeval forest.”

Canby also referenced a flick that had made something of a splash a few years earlier. He likened it to Star Wars but “without the redeeming humor of its comic-book style and eye-popping special effects.” It’s an interesting comment, given that Boorman himself appeared to be cognizant of some basic similarities to the earlier movie. 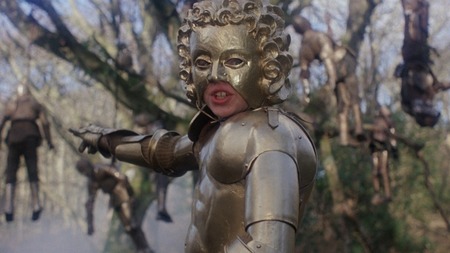 As he noted in an interview, when Excalibur was still being filmed:

It’s very basic to adolescent fantasy — look at Star Wars -– to have the notion of the young boy who is suddenly chosen, picked out to be a leader or a king. Almost all little children are drawn to the fantasy that they were foundlings and that their real parents come from some extraordinary background. Star Wars hit on these things and tapped into something perennially popular.

Here at Black Gate, we’ve looked at the film a few times over the years — most recently Alex Bledsoe’s Gateway Drug: Excalibur and Ryan Harvey’s celebration of the 30th Anniversary Blu-ray release.

Avid fans of Excalibur can’t get enough of it, although I can really only speak for myself. But I couldn’t help cringing a few years back when Hollywood’s absurd mania for remaking movies that were perfectly good the first time around began to rear its ugly head again. There was a buzz at the time that director Bryan Singer was going to take a crack at redoing Excalibur, but the project apparently fell through.

William I. Lengeman III touches on this, that and the other at florilegium444.

Yes, Excalibur rules. It’s on my Top X movie list. I’m not sure how many X includes these days, but this movie makes that list, whatever it is. Merlin really makes the movie, I think, not to take away from other cool factors (like Patrick Stewart and the soundtrack).

One of my favorite lines from the movie: “A dream to some… a nightmare to others!”

Another favorite is Merlin’s magic spell, which I will not even attempt to quote.

Now if only someone would reissue the soundtrack, which is going for ridiculous amounts on the secondary market.

(And, as long as I’m wishing, if only someone would reissue the Fellowship and Two Towers complete recording sets.)

Because of this post, I went back and watched “Excalibur” for the first time in probably two decades. Other than a few minor details, I thought it held up fairly well. And to be honest, I’d rather watch those battle scenes again and again instead of the CGI-video-gamesque scenarios of today’s movies, and that includes Jackson’s work.

Whether Excalibur is “good” or not seems to me to be beside the point, since Boorman himself doesn’t seem much interested in crafting a “normal” movie. The results are so eccentric, from casting to settings, that it forces audiences into clear camps: those who buy into it and those who do not. Frankly, I wish more art (of any and all kinds) took that approach. One thing Excalibur is not is a cookie-cutter action flick. I love it for its ambition, and its refusal to lie down with the lambs.

Trivia note: it rained for at least part of every single day during the Excalibur shoot. Why does the film look so muddy and damp? There you have it.

I love this freaking movie. Always get chills when Arthur hands Uriens Excalibur in the midst of battle — simultaneously disarming himself and giving his defeated opponent the talisman of Kingship — and asks to be dubbed a knight. Uriens dubs him, and Arthur’s enemies all swear fealty on the spot. Beautiful stuff.

Excalibur divided us as reviewers. I am a long time fan of the movie, my fellow reviewer couldn’t stand it. Because of its strange dreamlike nature it is most certainly a one of a kind.

I honestly wouldn’t want to see this remade, so am glad it fell through. This film wouldn’t have the same impact if it became a generic run of the mill hollywood job.

Eccentric is the word for this film, and I guess eccentric movies will always divide the audience. One of my fave films tho for sure 🙂