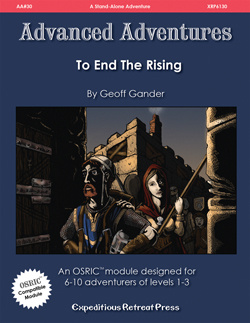 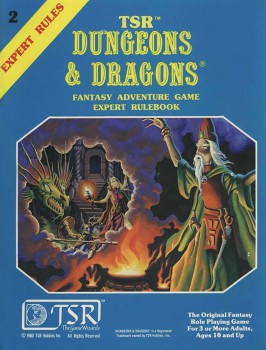 Small gaming companies have tapped into the retro-demand, through Open Gaming Licenses which are like open-source programming. So they can publish adventure modules for old-style RPGs.

Moreover, these indie gaming companies can produce free rulebooks which are basically copies of the original D&D rules, thereby making old-style D&D freely accessible to anyone with Internet access.

I thought TSR or Wizards of the Coast owns the D&D rules? Hit points, savings throws, clerics and stuff. How can companies put out rules and how can you put out modules that basically (no pun intended) are fully compatible with Basic D&D?

To put it simply, Hasbro (which owns Wizards of the Coast, which bought TSR in 1998) owns the rights to the published game worlds and their trademarked characters and monsters. They were not able to copyright game mechanics, character classes, and so on.

This means I can write, and sell, a game that uses D&D’s combat system (rolling a 20-sided die against a target number to determine whether the character hits something), so long as I avoided using their terminology, and so long as the world I used was my own.

The economics of the game industry is such that a company makes the most money off of rulebook sales – adventure modules yield comparatively less when you factor in the time spent in scenario design, writing, editing, and so on (even though that’s the fun part of the job). 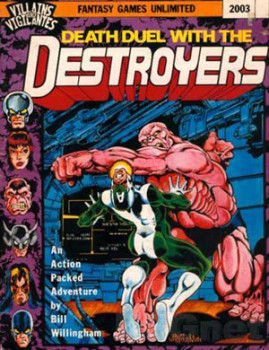 This led WotC to release the “d20” system (a derivative of 3rd edition D&D – there is also a “d20 Modern” line for modern-day RPGs), which was an open-source model that opened the door for other companies to develop sourcebooks and adventures, but not rules (you still had to buy the original rulebooks from WotC).

Some companies didn’t like the control WotC exerted over the d20 line, and opted to work under the Open Gaming License system (which WotC also created) instead.

Is anyone doing what you’re doing to other games? Villains & Vigilantes? Marvel Superheroes? Traveller 2300? Gamma World?

It depends on the game, but by and large OGL seems to be limited to D&D and its retro-clones.

Traveller is a special case because Marc Miller (who designed it back in 1977) owns the rights to the game now that Game Designers Workshop is defunct. He licensed QuikLink Interactive to produce “2320” which is a stand-alone supplement to the game using the d20 model.

Margaret Weis Productions (run by fantasy author and former TSR employee Margaret Weis) obtained the rights to produce a new Marvel Super Heroes game, but those rights are exclusive and it is not OGL.  However, an independent, free retro-clone (called 4C) is currently available, but there are no licensing opportunities for writers.

Villains and Vigilantes has been re-released by Monkeyhouse Games (started by the original creators). What is notable is that the publisher has posted submissions guidelines, as well as instructions on how to produce something for V&V. 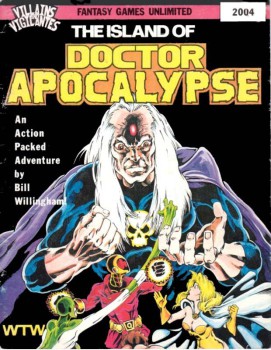 Goblinoid Games has produced a retro-clone of Gamma World called Mutant Future, and like V&V they have a system in place for third parties to produce products for it.

So, is the gaming dream, like the writer dream, to live off the sales?

As a teen, I dreamed of working in the gaming industry, but eking a living on freelance contracts would be tough. The rise of OGL, the new gaming companies, and the market demand for good content make it possible to live the dream part-time.

So, the basis of D&D is killing monsters, which may be a bit morally far afield for some kids. Is there a middle ground for prospective young players? Modules for 9-11 year olds that are easier to square with the morality of the modern world? Or is it just simpler rules?

The industry is dynamic enough that there are new companies getting into the game (no pun intended) on a fairly regular basis – some under the OGL system, others inventing their own rule-sets from scratch and selling them online as PDFs for as little as $1.00.

That being said, there are games out there (on sites like DriveThruRPG.com) for children as young as 5. Many of these types of games feature anthropomorphic animals or child super heroes, and tend to be very simple (characters have 2-3 stats, and usually only 6-sided dice are used). 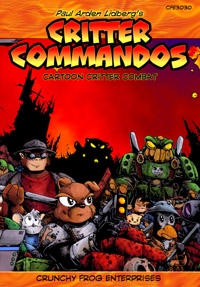 The focus is more on storytelling rather than hard rules, and death usually takes the form of the defeated foe running away or fainting, but combat is still there. It’s never too early to get kids started!

Here are a few examples: Attack of the Furryones, Critter Commandos, and Faery’s Tale Deluxe.

One last question. How would one break into gaming industry, even on a part-time basis? Where is the money and what does one have to do? And are there subsequent steps to get bigger, so to speak?

The best thing to do is contact the various small publishers and ask them about what they are looking for if their submission guidelines do not specify. From personal experience most of them are very approachable. They have different styles; some focus on different rule-sets (and yes, submissions have to have all the stats worked out), and others focus on specific game worlds.

Anyone wishing to get into this market will definitely need to do a bit of background reading. The standard rate for most of these guys is $0.01/word, and usually they will have the rights to your work afterwards (there is no reprint market, anyway) – so if they like it they will buy it outright (you remain credited as an author).

Thanks Geoff.  This has been a cool interview.  For everyone reading, if you’re interested in any of Geoff’s modules, or his fantasy and horror writing, check out his blog at http://geoffgander.wordpress.com/.

This post has been up for several days and I find it surprising that no one has commented on it.

Let me say then that I found this post very interesting and informative. Thank you Derek for doing the interview and post. I, for one, very much appreciated it and hope to see more of such posts in the future.

Hey James! Thanks for saying so. Geoff is a very interesting interviewee and it was fun to geek out a bit about D&D (although, officially, I’m not a nerd…)

[…] of the interview because the conversation relates back to some of the themes I touched on in my interview with module-writer Geoff Gander, especially about some of the opportunities opening up with […]