Hey gang! I’m back this week with the second part of my look back at the Firefly TV show. Last time, I talked about the pilot episode; this time I’ll be discussing the second and third episodes.

If I’m not mistaken, this was the first episode to air. As I said last week, I think this was a major mistake.

It starts in a cantina where Mal, Zoe, and Jayne are drinking at a table. Some drunk makes a toast to Unification Day, the anniversary of the Alliance’s victory over the Independents. Well, Mal doesn’t take kindly to that. Words are exchanged and a good old-fashioned bar brawl ensues.

Now this is just fine and kinda fun, and I can see why an inexperienced studio executive might think this is exactly the sort of opening a new series needs. But here’s the problem: we (the audience) can’t get invested in this fight because we don’t know the background. You remember. That background we were supposed to see in the pilot that explains how Mal and Zoe fought for the Independents to the bitter end and they still harbor resentment toward the Alliance… 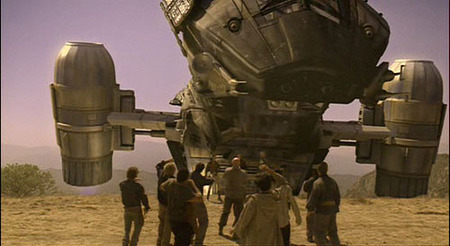 The brawl ends with Wash bringing Serenity overhead to chase away the mob threatening our heroes. The good news is that before they got thrown out of the cantina, Mal made contact with their next client. They’ve got a job.

Now (probably because the show didn’t start with the correct pilot) we get a bunch of mini scenes that explain the various backgrounds of the crew in fast-forward mode. River has a bad dream (about the bad things done to her at the research center) and her brother Simon comforts her. Next’ Mal talks with Shepherd Book and they re-show their philosophical differences. (This time without the subtle reference to Mal’s former piety.)

Kaylee is having her hair brushed by Inara as they discuss Kaylee’s crush on Simon. Mal chases Kaylee back to the engine room and tells Inara that he wants her to stay in her shuttle when they go to meet their next client, because he has a bad reputation.

Serenity docks with a space station, where they meet their client. Adelai Niska is a bespectacled little old man who looks benign, but he’s a cold-blooded killer. He wants them to rob a train, no questions asked. Mal agrees because he’s desperate.

Next, we see Zoe and Mal on the train, riding as passengers. She has reservations about working for Niska (a little late to be discussing it now, isn’t it?). They head to the cargo car and run into a platoon of Alliance troops. 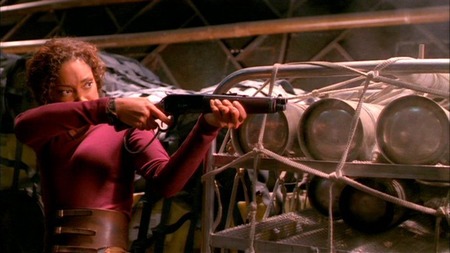 Back on the ship, Inara and Book are talking and bonding in a replay of their interaction in the unseen pilot episode. (No, I’m not going to let it go.) Meanwhile, Kaylee explains to Simon how Mal and Zoe are going to get the cargo off the train. Jayne chases Simon away and then tells Kaylee they ought to turn in the doctor and River for the reward (foreshadows of things to come).

Mal and Zoe break into the car with their booty and open a hatch in the roof. Serenity swoops in overhead and lowers Jayne to the car, but an Alliance trooper hears the noise and comes to investigate. Jayne gets shot in the leg (which seems to be a theme). The crew gets the goods, but Mal and Zoe are stuck on the train. They hide among the passengers. At the next town, they find out that the cargo they stole was badly-needed medicine. Now Mal feels bad about stealing it.

Back on Serenity, Jayne wants to make the delivery, while the rest of the crew wants to get Mal and Zoe back. Simon drugs Jayne. River mumbles something about “hands of blue.”

Zoe and Mal pose as a married couple that came to town looking for work as they are interviewed by the sheriff. They learn that the medicine is used to combat a rampant degenerative condition that most people on this moon suffer from. The sheriff doesn’t really buy their cover story, but then Inara shows up posing as their owner (saying Mal and Zoe are runaway indentured servants). Smitten, the sheriff lets her take them away. 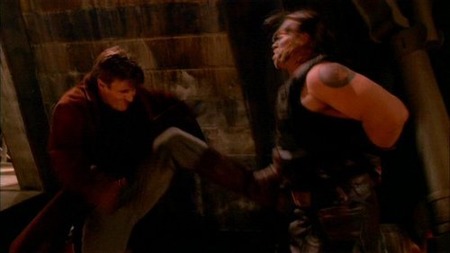 Mal decides to give the cargo back to the town. Yet, before that can happen, Niska’s men show up. Mal calls off the deal, but they won’t accept no for an answer.

A gunfight ensues and the crew wins. Mal and Zoe take back the medicine. When he gets back, Mal tries to reason with Niska’s men. There is a very nice moment when the main henchman—a big scary guy with a face tattoo—refuses to accept Niska’s deposit money back, saying he will hunt them down to the ends of the galaxy. At which point, Mal casually kicks him into one of Serenity’s turbine engines. Mal starts to address the next henchmen, who is quite eager to carry the message back to Niska. Lovely gallows humor.

Simon stitches up Mal while they discuss River. She is in her room, talking about “two by two, hands of blue.” Then, we switch to an Alliance cruiser where two men with blue hands are searching for River…

So that’s the second episode. Now, don’t get me wrong. This was very enjoyable, with some fighting and exploring the setting universe. Niska makes for an interesting character; definitely someone you don’t want to cross. And poor Mal is forced to cross him.

However, this was not the episode on which to build a franchise. Because they had to waste time re-introducing us to the characters and bits of their background, the main plot felt rushed. And because this was only a one-hour episode, instead of two hours like the original pilot, those background bits felt rushed too. So we get the worst of both worlds. I remember watching this episode when it first aired. I was excited for a new scifi show, and my wife was excited because she loves the Buffy series. Afterward, we were both underwhelmed. It didn’t feel substantial enough. Too much was not explained. Why does Mal hate the Alliance? Why are there Old West elements to the setting? Why why why. Oh yeah. Because the studio decided not to air the pilot. Argh! 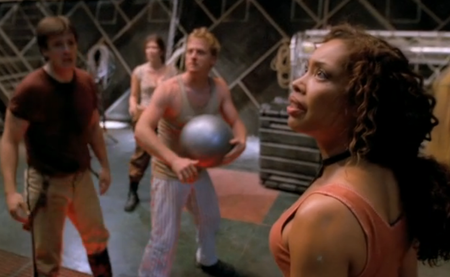 This episode starts with the crew playing a ball game in the ship’s hold. Simons talks to Inara about River. She says they’re all running from something. A proximity alert rings out.

They have come upon a wrecked ship in space. (Space Hulk!) It’s a settler vessel. Mal decides to check it out, and they dock with the hulk, not realizing that some weird tentacles come out of the wreck and attach themselves to Serenity’s hull.

Mal and Zoe go over first. The wreck looks abandoned. No signs of violence. (When we learn what happened here, this detail will seem odd…)

Meanwhile, River has a bad dream about people screaming in agony. Mal calls Simon over to the wreck. Here we learn that Simon has a fear of spacesuits. Jayne neglects to tell the doctor that the wreck has atmosphere, and thereby has a nice laugh at Simon’s expense.

While the crew searches the wreck for valuables, River comes over by herself. She’s the one who finds all the bodies, strung up in the hold like meat in a butcher’s window. (And shades of The Wrath of Khan.) Jayne is attacked by a guy who turns out to be the lone survivor of this massacre. They take him back to Serenity, although Mal says it would be kinder just to kill him. He and Book clash over whether the guy can be saved, but only Mal knows what the survivor saw, what he was forced to watch.

While most of the crew “buries” the dead from the wreck, Kaylee disables the tentacle booby-trap. As soon as Mal saw the survivor, he knew what had happened here and he knew to look for a trap. 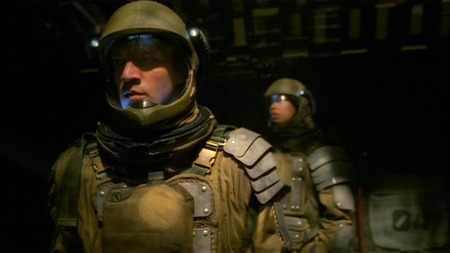 The survivor wakes up and grabs a knife, but no one notices because an Alliance cruiser shows up. The cruiser boards Serenity and the officer in charge accuses the crew of illegal salvage. He is also looking for two fugitives: Simon and River. Mal and the crew play dumb. The Alliance troops find the survivor in the infirmary and then the officer arrests the entire crew, taking them back to the cruiser. He thinks they are responsible for the massacre on the wreck.

The officer interviews the crew individually, and this is probably my highlight of the episode as they give hilarious answers to his questions. The best are Zoe, who refuses to discuss her marriage, and Wash, who is happy to go into great detail about his wife’s physical attributes. (“Have you ever been with a warrior woman?”)

Meanwhile, the Alliance troops search Serenity for Simon and River with no success, because the siblings are clinging to the outside of the ship in spacesuits. Poor Simon. But it’s a clever trick.

When it’s Mal’s turn to be interviewed, he tells the Alliance officer that he didn’t kill those people. Also, that the survivor is dangerous. When he explains that Reavers killed the settlers, the officer doesn’t believe him. In the cruiser’s sick bay, the survivor goes berserk and escapes. Klaxons ring throughout the cruiser.

Simon and River get back onboard Serenity just as the “survivor” returns there. The Alliance officer orders a search and Mal says take him along. Together they hunt down the wild man, whom Mal describes as the Reavers’ last victim, the one they made watch as they brutalized his friends and family, leaving him insane. The survivor attacks the officer and would have killed him, but Mal saves him.

The Alliances lets Serenity and her crew go free. Of course, they aren’t allowed to keep any of the booty they found on the wreck, but it’s a better deal than they probably expected. And there ends the episode. 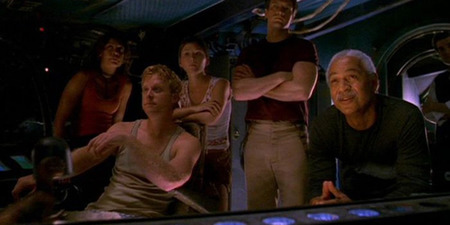 This episode has a delicious underlying tension, as we keep expecting the Reavers to show up. When watched in the proper order, this chapter adds to the horror of what we saw in the pilot, when Reavers tried to take Serenity. Now we can see what these space berserkers do to their victims and it makes them all the more terrifying.

Also, the whole idea of the “survivor” who went insane after watching horrible stuff is interesting. I’m not really sure it holds water, psychologically, but it is a nice break from standard tv “bad guys.”

I did wonder why Mal and his crew didn’t see signs of violence when they first explored the wreck. Did the Reavers clean up after all that raping and mutilating and murdering? Just a bit odd. But as I said, overall I liked to see the results of a Reaver attack.

With three episodes down, the universe of Firefly is really starting to come together. If you skipped the pilot, well, things may still be a little murkier. Episodes two and three are heavily plot-driven, in my opinion. I’m hoping we’ll get more character interaction in the near future.

I saw the series in its proper order, so I can only imagine the frustration of seeing episode 2 first. Recalling the episode from your summary, I can see how it was compromised by unnecessary recap.

In “Bushwacked”, maybe the survivor guy cleaned up after the Reavers left before his total decent into madness.

[…] I’m back with my third installment of this series about the Firefly show. I covered the pilot in Part 1, and episodes two and three (“Train Job” and “Bushwhacked “) in Part 2. […]