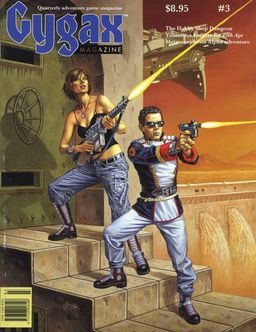 When the last game shop in town went out of business six years ago, I lost the ability to easily browse the latest new releases, and keep up with what’s going on in the industry. Sure, Games Plus in Mount Prospect– one of the finest game shops on the planet — is still in business and thriving, but it’s a good hour away, and I don’t get there more than two or three times a year (although I never miss their semi-annual auction).

One of the things I miss the most is the magazine section. Nothing makes you feel your hobby is vibrant and alive quite like a healthy ecosystem of periodicals. I really enjoyed standing in front of the magazine rack and pulling out the latest issue of Knights of the Dinner Table, Kobold Quarterly, the excellent KnockSpell, Games Workshop’s  White Dwarf, or Troll Lord’s The Crusader.

The loss of so many local game shops has really hurt gaming magazines — we lost Kobold Quarterly in 2012 and Mythmere has announced the future of Knockspell is in doubt. That’s one of the reasons I was so delighted to hear about the launch of the very promising Gygax Magazine last year.

I reviewed the first issue last March and I was very impressed. Issue #2 was released in time for Gen Con, and I’ve been anxiously awaiting the third issue for some time… and wondering how I was going to find a copy.

My wait finally ended last week, compliments of a Priority Mail package from our San Diego correspondent and ace blogger Scott Taylor — who late last year was hired as the new Art Director for the magazine. Inside was a beautiful copy of Gygax Magazine #3, the first issue with his name on the masthead.

And he certainly should be proud of the work he’s done. Scott stepped into some big shoes at Gygax — Jim Wampler was credited as Art Director for the first issues and he did a spectacular job — but Scott’s impact is apparent the moment you open the magazine.

The first big news this issue is our new art director, R. Scott Taylor. Take a look at the stunning cover painting by Clyde Caldwell, the timeless illustration styles of veterans like Jim Holloway, Janet Aulisio, Michael Wilson, John Dollar, Charles Peale, Travis Hanson, and Jeff Laubenstein. Amazing artists all, curated by Scott with his critical eye and knack for assembling the right talent for each article. I found Scott through his blog, Art of the Genre, and I highly recommend it to anyone interested in the world of fantasy art and literature. 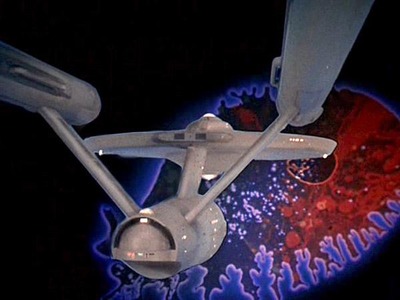 As I noted in my earlier review, Gygax Magazine is very forward-looking, with its obvious respect for the OSR movement and love for the new generation of Dungeons & Dragons retro-clones, but in design and editorial outlook it deliberately harkens back to The Dragon, the magazine that formed the very heart of the RPG industry 30 years ago.

From the name of the publishing company (TSR) right down to the cover font, Gygax lets readers know it is bringing the same inclusiveness and thoroughness — not to mention the terrific sense of excitement — that The Dragon brought to the industry all those years ago. Scott’s work as art director shows very clever dedication to that aesthetic, hiring veteran artists whose work will be instantly recognizable to anyone who read The Dragon, or indeed played RPGs of any kind, decades ago.

Stephen V. Cole, co-founder of Task Force Games and creator of Star Fleet Battles, kicks things off in fine style with his article “How do you stop a space amoeba?”, a solo scenario for Federation Commander. If you’re a Star Trek fan and you never daydreaming about facing off against one of these monsters in a Federation battle cruiser, you have no soul.

I loved the way Stephen set the scene for his scenario in his opening paragraph:

Your starship, the USS Saratoga, is patrolling the area when the Class I alarm comes through via subspace. A deadly space amoeba is wandering through an inhabited region of the Federation, its deadly energy field causing death and destruction wherever it goes. This monster is dangerous, but not particularly evil; it is in fact simply a wild animal that is not aware of how many sentients it has killed.

Saddened that you may have to kill the creature to stop its attacks, but outraged by the number of Federation citizens already killed, your ship accelerates to warp seven. Arriving as the last planet devastated by the monster, you follow its ion trail until, at last, you make contact.

Already Gygax is fulfilling one of my childhood dreams, and we’re only on page 4. Sweet. 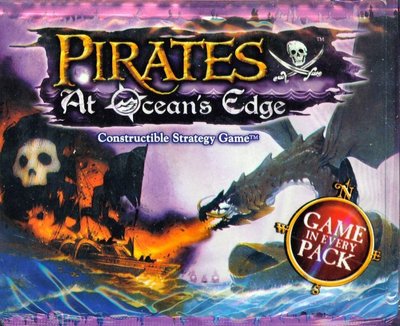 James Carpio and Jayson Elliot deliver two new player character classes: a dwarven rune priest for Dungeon Crawl Classics, and an Airlancer for AD&D. I didn’t read this articles, but I admit they did make me feel like I was reading The Dragon again.

Things got a little more interesting with Michael Curtis’ “Artifacts to impart ancient lore,” which describes a fascinating assortment of powerful items that can impart some serious knowledge to your players — including The Hypogeal Castaway’s Bottle, containing the last breaths and accumulated knowledge of the sorceress Salcyryl Kast, who wandered lost in the Underdark for over a decade before meeting her fate on the shores of a great subterranean sea, and The Lost Dream of the Slumber Thief, a  wall-less chamber adrift on the dream plane containing the secrets of the fabulous dream treasury.

Curtis gives each item a unique back story and, as any good Dungeon Master can tell you, nothing beats a good back story for firing players imaginations in the quest for epic loot. These are the kinds of treasures my players would love to get their mitts on, and they would fit nicely in my current campaign.

Contributing Editor Timothy Kask offers “Master Mariner,” naval rules for the Pirates constructible strategy game — which frankly make this collectible card game a lot more appealing to me. I may have to look into it.

Marc Zukerman contributes a thoughtful piece on creating a Blood Bowl team for league play, but it was Ben Gerber’s absolutely gonzo article “Argyle & Crew’s Scavenger Hunt,” rules for a sock puppet RPG for kids, that really wowed me.

Yes, a sock puppet RPG — really a combination of a scavenger hunt and trivia game for kids four and up. It’s brilliant, and I wish I’d thought of it. Gerber outlines how you can create a completely entrancing RPG experience for young kids using nothing more than a few socks, sticky notes, and some imagination. This is the kind of thing that could have changed my children’s lives if I’d learned about it 10 years ago. If there’s any justice in the world, this thing will go through nine editions and make Gerber a millionaire.

Getting back to more traditional gaming, Jess Hartley answers a heartfelt letter from a reader on how to get rid of an unwanted player, in his aticle “How to split up the party.”

There is a woman who was originally introduced to our social circle and gaming group, because she was another member’s girlfriend… the couple has since broken up and there’s a huge amount of tension between her and her now-ex… She is passive-aggressive, saying things to make him (and the rest of us) uncomfortable, and God forbid if her ex starts to flirt with or even socialize with others in the group. On the other hand, we’re all she has. She has no other gaming groups, no other friends. I don’t want to kick her out, because I’m too chicken to confront her.

Hertley offers some excellent advice on how to deal with problem players of all kinds. It’s well worth the read for anyone who’s ever tried to manage a gaming table.

James M. Ward, author of Metamorphosis Alpha, the first science fiction role playing game, offers a riff on Richard C. Meredith’s SF novel We All Died at Breakaway Station in “They all died at the International Space Station,” an 8-page Metamorphosis Alpha adventure that’s accompanied by detailed maps and some terrific art. I’ve never seen an adventure set on the ISS before, and the well-researched setting alone made this one fascinating. 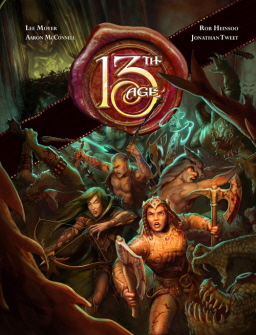 The centerpiece dungeon — usually pride of place for the issue — this time is a slice of The Hobby Shop Dungeon, a long-running campaign from Lake Geneva, home of Gary Gygax and TSR. Written by Ernest Gary Gygax Jr. and Benoist Poire, “The Marmoreal Tomb of Garn” is for first to third level adventurers, suitable for all first-edition compatible games.

The beautiful fold-out color map of the Tomb, printed on heavy cardstock, enticed me immediately — and was all I needed to see to know that this was an adventure in the old-school tradition. The massive adventure unfolds over ten pages of dense text, broken up with the distinctive art of Jim Holloway.

Ex-Kobold Quarterly editor Wolfgang Baur returns with the always-excellent The Kobold’s Cavern section, this time focusing on Villainous Knights for one for the most popular and promising new RPGs, Pelgrane Press’ 13th Age.

Ben McFarland closes out the articles with “Savages charms and monstrous fetishes,” primitive magic for Pathfinder, from cloaker spikes to gorgon scales. This was precisely the kind of article I always found most useful — filled with delightful and deadly surprises for my players.

While that brings the articles to a close, that’s by no means the end of the magazine, as there are three pages of full-color comics. While I miss Jim Wampler’s Marvin the Mage! and the always-excellent What’s New? with Phil and Dixie by Phil Foglio, both of which were in issue one, Aaron Williams’ Full Frontal Nerdity was fun, and Rich Burlew’s Order of the Stick — in which the gang finds itself rebooted to first level — was brilliant, as always.

That wraps up another great issue of Gygax. I highly recommend the magazine for anyone with the slightest interest in old-school dungeon crawls, or anyone who wants to keep up on the adventure gaming hobby.

If I have any critique at all it’s that, while it’s great to see such a diverse range of games, the magazine needs a bit more focus.  How many people play Blood Bowl, or Metamorphosis Alpha? Meanwhile, the core audience is hungry for more core OSR, Pathfinder and AD&D gaming articles.

Gygax Magazine is published quarterly by TSR, Inc. Issue #3 was published in late 2013; it is 68 pages, many in full color, and priced at $8.95. Order directly from the magazine’s webpage. We last covered Gygax with  Issue #2.

I just have a Pavlovian reaction to seeing that font used for the magazine title.

Thanks for the in-depth overview John. I thought the first two issues were excellent. I’m looking forward to getting this third one.

In case you’re interested, I buy copies of Gygax through the online outlet Noble Knight Games. They even notify me when a new issue is out.

Thanks for the suggestion. I’ve bought a lot of games from Noble Knight — they’re a terrific outfit — but I never thought of ordering magazines through them.

Funny. The mere mention of this possibly containing something about Blood Bowl just sold me on this. Buying immediately.