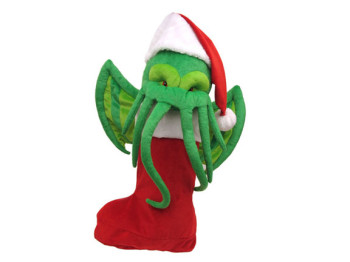 Last week I wrote about the famous editorial penned by Francis Church in response to a query by a girl named Virginia O’Hanlon as to whether there is a Santa Claus. Re-reading “Is there a Santa Claus?”, I was struck by a curious correspondence between part of Church’s argument and the very first paragraph of one of H.P. Lovecraft’s most famous stories, “The Call of Cthulhu.” I’ll run the relevant excerpts from Church, followed by the Lovecraft paragraph. See for yourself:

“…All minds, Virginia, whether they be men’s or children’s, are little. In this great universe of ours man is a mere insect, an ant, in his intellect, as compared with the boundless world about him, as measured by the intelligence capable of grasping the whole of truth and knowledge… The most real things in the world are those that neither children nor men can see… Nobody can conceive or imagine all the wonders there are unseen and unseeable in the world.  You may tear apart the baby’s rattle and see what makes the noise inside, but there is a veil covering the unseen world which not the strongest man, nor even the united strength of all the strongest men that ever lived, could tear apart.” (Church 1897)

“The most merciful thing in the world, I think, is the inability of the human mind to correlate all its contents. We live on a placid island of ignorance in the midst of black seas of infinity, and it was not meant that we should voyage far. The sciences, each straining in its own direction, have hitherto harmed us little; but some day the piecing together of dissociated knowledge will open up such terrifying vistas of reality, and of our frightful position therein, that we shall either go mad from the revelation or flee from the light into the peace and safety of a new dark age.” (Lovecraft 1928)

Hmmm. Man is a mere insect in his intellect, unable to grasp the whole of truth and knowledge. His mind is unable to correlate all its contents. We are ignorant, in black seas of infinity, unable to peer through the veil covering the unseen world… See what I did there? Pretty much jumbled them together, and they are of a piece.

The shared premise, I think, is what Shakespeare succinctly expressed through the character of Hamlet four centuries ago: “There are more things in heaven and earth, Horatio, than are dreamt of in your philosophy” (Shakespeare 1602).

The correspondence between the Christmas editorial and “The Call of Cthulhu” is undoubtedly coincidental, and there are two salient differences in the discordant philosophies expressed in both texts. Church asserts that we can only gain glimpses through that veil of ignorance via “faith, fancy, love, poetry, romance,” whereas Lovecraft suggests the sciences are drawing back the veil. And, of course, Church posits the hidden “supernal beauty and glory beyond” as a good thing. Lovecraft, most assuredly, portrays those “terrifying vistas of reality, and our frightful position therein,” as a bad thing. A very, very bad thing.

Both views resonate with me; I, perhaps contradictorily, sympathize with both. What does that say about me?

“See what I did there? Pretty much jumbled them together . . .”

Not to be overly critical, but I think this sentence of yours pretty much sums up this and your last post. If one makes very vague and overly ambiguous claims, I think it’s easy to see supposed connections between such claims for we’re never quite sure what such claims are not saying.

If the point of such posts is merely to be entertaining, then my remarks are off target and I apologize.

James, I wanted to make a more specific response to your comment, but I’m not sure which “vague and overly ambiguous claims” you’re referring to. So you have me at a disadvantage in launching a friendly debate, because I’m not sure what to defend. Of course, you could come back and say that this underscores your point: that my claims were so vague and ambiguous, even I don’t know what they were. (But you wouldn’t take such an easy score against a disadvantaged opponent, would you?)

As to whether “the point of such posts is merely to be entertaining,” well, c’mon. Last week’s post was a defense of the existence of Santa Claus. This week’s compares a letter about Santa Claus and the Cthulhu Mythos. Clearly they weren’t entertaining to you, but no, they were not presented in the spirit of academic arguments. Yes, they were more just off-the-cuff weekly blog posts. Another tip-off (aside from the tongue-in-cheek titles) is that I did not append the “Black Gate Essay” label to them, which I occasionally do for posts of a more serious or scholarly nature.

That said, I did in last week’s post try to allude to the tantalizing idea that what the artist creates takes on a sort of life and reality of its own, without getting into a protracted scholarly argument.

The underpinning point would be this: there are folks who dismiss the literature you and I read as a complete waste of time because it is not representational — it does not reflect reality as we know it. They are like the woman in Miracle on 34th Street who refuses to let her daughter believe in Santa Claus or play make-believe because this woman confuses myth and fantasy with lies. Folks like Tolkien and Neil Gaiman and many other creators and purveyors of such work have come along and countered that a myth or a story can be true even if it is not factual, can perhaps express truths that could never be captured by facts.

That argument is not one I intended to elaborate on in the post, only to hint at, since the post was mainly just about an editorial on the existence of Santa Claus. My base assumption is that most people reading this site will already be sympathetic to those claims, if not intimately familiar with them, since we obviously don’t think we’re just wasting our time on escapist lies.

Is this what rubbed you the wrong way: that I alluded to certain claims but, having introduced them, did not develop them into a more thorough and sustained argument?

As I said in the last comment, if this post was for entertainment purposes, then my remarks were wide of the target and, again, I apologize.

Nothing can be known, not even this.

I think this is actually a fairly clever comparison, Nick. The essential articles of spiritual faith, and the tenets of Lovecraft’s existential horror, are both rooted in the belief that our ability to perceive and understand the universe is fundamentally flawed.

One draws a conclusion of profound hope, and the other leads to cosmic terror. But they start with the same facts.

Someone with greater schooling in philosophy than I will have to tell us what that reveals about human nature. 🙂

@John: “The essential articles of spiritual faith, and the tenets of Lovecraft’s existential horror, are both rooted in the belief that our ability to perceive and understand the universe is fundamentally flawed. One draws a conclusion of profound hope, and the other leads to cosmic terror. But they start with the same facts.”

Thanks John! Well said — that is precisely what I was trying to get at in the second-to-last paragraph.