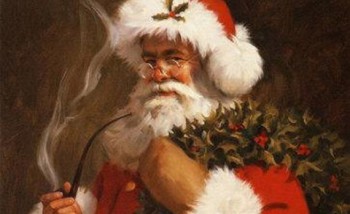 “Yes, Virginia, there is a Santa Claus.” You’ve probably heard that phrase even if you’ve never read the editorial, written by Francis Church and appearing in the September 21, 1897 edition of the New York Sun in response to a letter from an eight-year-old girl named (you guessed it) Virginia. It has become a part of American Christmas folklore, and rightfully so.

“Is there a Santa Claus?” From the first time I ever read that editorial, I knew it was true.

I believe it is true not in some cute or ironic way, but 100% legit, expressing a philosophical truth. Santa and all our treasured fictional characters are real.

(Incidentally, all you Tolkien fanatics and high-fantasy geeks: this is essentially the same argument that was put forth by J.R.R. Tolkien in his essay “On Fairy Stories” and in conversations and correspondence. So, doubly cool.)

Church expressed something that I believe philosophically, as much now as when I was ten, but which I have found frustratingly hard to articulate.

Before I lay this argument on you, here is the original letter and the famous response (which succinctly settles the question in under 500 words!), courtesy of Newseum.org:

“DEAR EDITOR: I am 8 years old.  Some of my little friends say there is no Santa Claus.  Papa says, ‘If you see it in THE SUN it’s so.’  Please tell me the truth; is there a Santa Claus?  VIRGINIA O’HANLON. 115 WEST NINETY-FIFTH STREET.”

VIRGINIA, your little friends are wrong. They have been affected by the skepticism of a skeptical age. They do not believe except they see. They think that nothing can be which is not comprehensible by their little minds. All minds, Virginia, whether they be men’s or children’s, are little. In this great universe of ours man is a mere insect, an ant, in his intellect, as compared with the boundless world about him, as measured by the intelligence capable of grasping the whole of truth and knowledge.

Yes, VIRGINIA, there is a Santa Claus. He exists as certainly as love and generosity and devotion exist, and you know that they abound and give to your life its highest beauty and joy. Alas! how dreary would be the world if there were no Santa Claus. It would be as dreary as if there were no VIRGINIAS. There would be no childlike faith then, no poetry, no romance to make tolerable this existence. We should have no enjoyment, except in sense and sight. The eternal light with which childhood fills the world would be extinguished.

Not believe in Santa Claus! You might as well not believe in fairies! You might get your papa to hire men to watch in all the chimneys on Christmas Eve to catch Santa Claus, but even if they did not see Santa Claus coming down, what would that prove? Nobody sees Santa Claus, but that is no sign that there is no Santa Claus. The most real things in the world are those that neither children nor men can see. Did you ever see fairies dancing on the lawn? Of course not, but that’s no proof that they are not there. Nobody can conceive or imagine all the wonders there are unseen and unseeable in the world.

You may tear apart the baby’s rattle and see what makes the noise inside, but there is a veil covering the unseen world which not the strongest man, nor even the united strength of all the strongest men that ever lived, could tear apart. Only faith, fancy, poetry, love, romance, can push aside that curtain and view and picture the supernal beauty and glory beyond. Is it all real? Ah, VIRGINIA, in all this world there is nothing else real and abiding.

I agree. Now, to make this argument, I do need to broaden the definition of “real” just a wee bit. Let’s expand it beyond just the limitation of things are “real” if they have some material presence. Obviously, many things — ideas, concepts, emotions — do not. If you tell me that love does not exist because you cannot take a measurement of it, weigh it, determine its length or mass in a lab, then go away you numb-head. You’re dismissed from class and quit reading my blog.

But if you grant that some things can be real even if they do not have a physical presence, then that’s all I need: you grant that much and we can proceed.

Look, you can’t say Tom Sawyer or Batman or Bilbo haven’t had an effect on me. Just because they never existed in the mundane sense that they had no physical address outside our minds doesn’t negate their impact. If something affects you, then it’s real.

Santa Claus and other fictional characters were created by — as far as we know — the greatest supercomputer ever produced by this universe, the human brain; therefore, they have been brought into existence by us. They have a level of reality. As semi-gods or demi-gods or, as J.R.R. Tolkien expressed it, as sub-creators, we have created them. If there is a Creator-God, then in the same sense that the Creator created us, then we have brought into being, by our own powerful alchemy, Father Christmas, Joe Christmas, Gandalf, Godzilla, Conan, Kermit the Frog, and all these other characters that millions of us interact with every day. They do have a level of reality because, in some sense, we have imparted it to them.

Inevitably, a hardcore reductionist out there will protest: “That is too broad a definition of reality! Yes, Kermit the Frog exists in the sense that Jim Henson made him up, fashioned him out of antron fleece and gave him a voice, and others made up stories about him and produced other representational images of him. But you cannot lay a living, breathing Kermit the Frog on a laboratory table and dissect him!” Well, I’d rather hang out with Kermit the Frog than with that guy. If I can have a preference for hanging out with Kermit over that guy whom we know does exist, then obviously Kermit must exist too.

And along with my own children, I’m eagerly awaiting the annual visit from Santa, whom I know is real because I, and many of you, continue to endow him with life.

Somebody’s working awful hard to get on the Nice List. What’d you do that’s so naughty, Oz? 😉

@Ty: It’ll take me years to get off that naughty list. 😉

Black Gate » Blog Archive » Yes, Virginia, There is a Cthulhu

[…] Last week I wrote about the famous editorial written by Francis Church in response to a query by a girl named Virginia O’Hanlon as to whether there is a Santa Claus. Re-reading “Is there a Santa Claus?”, I was struck by a curious correspondence between part of Church’s argument and the very first paragraph of one of H.P. Lovecraft’s most famous stories, “The Call of Cthulhu.” I’ll run the relevant excerpts from Church, followed by the Lovecraft paragraph. See for yourself: […]