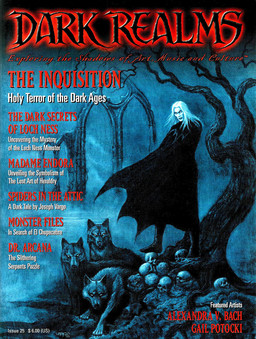 I’ve always been a fan of small press magazines, especially genre magazines. That’s where you frequently find much of the cutting edge fiction and design — they take the kinds of creative risks that larger magazines simply can’t afford to. While I was running my own small press magazine, I didn’t have time to keep up on what was going on at the fringes, of course. And I missed out on a lot. But now that the print version of Black Gate is no longer an ongoing concern, I can afford more time to look around.

I bought my first issue of Dark Realms last week. A back issue, #25, cover dated Winter 2007. To be honest, I’m not sure what Dark Realms is all about, but it seems like my thing. The cover has a vampire dude, and promises to explore “The Inquisition” and the “The Dark Secrets of Loch Ness” inside. The subtitle reads “Exploring the Shadows of Art, Music, and Culture.” I’m up for that.

First thing I want to know, of course: is this thing still being published? Call it the ghoulish curiosity of a publisher with his own dead magazine. Sadly, I discovered I’m too late to actually support Dark Realms — the magazine give up the ghost five years ago, in 2008, after an impressive 32 issues.

From what I can tell after spending a few hours with it, Dark Realms is an odd mix of non-fiction, artwork, horror fiction, music reviews, and ads for goth necessities. However, while the magazine is visually very striking, it seems to rely heavily on a small number of contributors.

Issue #25 is a fine example. The moody and effective cover is by Joseph Vargo. On the inside front cover is a house ad for an art book and a tarot deck — both by Joseph Vargo. In the middle of the magazine is another ad, this one for Tales of the Dark Tower, a very professional-looking original anthology based upon characters created by Joseph Vargo. Turn the page and we come to the first fiction piece of the issue: “Spiders in the Attic,” written by… Joseph Vargo (with art by Joseph Vargo).

Vargo is a talented artist and I’m sure his fiction is commendable as well. And I know damn well small press mags have to create the impression they’re much larger than they actually are, just to survive. But when every bolt and nut has been screwed into place by the same pair of hands, the illusion that you’re part of a thriving enterprise starts to wear a little thin.

Something else I found disappointing: I was hoping for a magazine of horror and dark fantasy fiction, but Mr. Vargo’s two-page short is the only one on hand. If it’s not really a fiction mag, exactly who was Dark Realms geared towards?

When you want to identify a magazine’s target market, the surest way is to look at the ads. And the advertising — for tarot cards, indie albums, Henna designs, small press horror volumes, and “goth lifestyle boutiques” — certainly tells the story. It’s clear that Dark Realms wanted to be the flagship publication of the goth movement.

I wouldn’t imagine that to be a commercially very lucrative market niche… and I suppose I’m right, since the magazine is now dead. On the other hand, getting to 32 issues was an amazing accomplishment, so what do I know?

In any event, there’s plenty here to keep me occupied, including creepy visual puzzles, movie and game reviews, and much more. I found Doctor Arcana’s full-page Slithering Serpents puzzle a lot of fun, and noted the solution to last issue’s puzzle was printed in the back.

I was also impressed to find, not one, but two multi-page artist spotlights, on Alexandra V. Bach and Gail Potocki — both features in black and white, but both including generous samples of art. Both artists seem to exclusively favor beautiful young women in windswept goth landscapes, I notice, but that’s not a surprise at this point.

Extensive and well-researched non-fiction pieces on “The Dark Secrets of Loch Ness,” by Russell Williams, and “The Lost Art of Heraldry,” by Madame Eudora, round out the magazine.

I had a look at the masthead to see if I recognized any of the names, but the magazine was edited anonymously (by “Mr. Dark,”) which is a little unusual. I didn’t recognize any of the Contributing Writers, but then again there’s a tiny chance that a few of the names listed (Dr. Arcana, Maxx, Vincent Kastle, Litara Angeli, Madame Endora…) were pseudonyms as well.

The Inquisition: Terror of the Dark Ages
The Dark Secrets of Loch Ness
Madame Endora: The Lost Art of Heraldry
Doctor Arcana: The Slithering Serpents
After Dark Horror Fest: 8 Films to Die For
Monster Files: On the Trail of El Chupacabra
Short Fiction: “Spiders in the Attic” by Joseph Vargo
The Union of Hope and Sadness by Gail Potocki
Digital Dreamscapes by Alexandra V. Bach
Ebon Flow: News and Vicious Rumors from the Shadows
Plus all the latest Music, Movies, Games, and Books

Dark Realms #25 was published in Winter 2007 by Monolith Graphics. It is 48 pages with glossy, black & white interiors, priced at $6. The website, with a cover gallery and contents of all previous issues, is here.

Do you suspect maybe “Mr. Dark” was Joseph Vargo?

I do, actually. And if it’s true, it was probably a good idea.

Mr. Vargo is clearly an extremely talented and hardworking guy, and Dark Realms was lucky to have him. But when so much of any magazine is produced by one individual, it starts to look less like a professional publication and more like a vanity project.

So if Vargo was also the editor, it was a good idea to use the “Mr. Dark” moniker, I think.