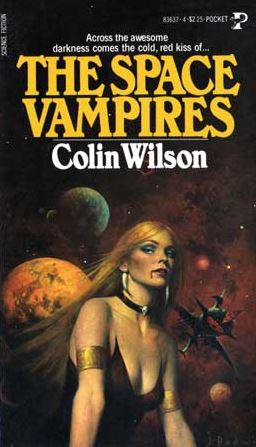 Bill Crider is reporting that Colin Wilson, the British author of over 110 books — including Ritual in the Dark (1960), The Mind Parasites (1967), The Space Vampires (1976), Science Fiction as Existentialism (1980), and the Spider World novels — passed away late last week.

Wilson debuted in 1956 with a bestselling work of non-fiction, The Outsider, when he was only 24 years old. Written mostly in the Reading Room of the British Museum, while he was living in a sleeping bag on Hampstead Heath, the book examined the psyche of the Outsider by looking at the lives of artists and writers including Ernest Hemingway, Franz Kafka, Jean-Paul Sartre, Friedrich Nietzsche, Vincent van Gogh, T. E. Lawrence, and others. (See “Now they will realise that I am a genius,” The Observer‘s entertaining piece on his autobiography, for more details)

Wilson was immediately celebrated as one of Britain’s leading intellectuals — a reputation “that sank as fast as it had rocketed” (as he later observed) after the publication of his second book, Religion and the Rebel (1957), which Time magazine reviewed under the headline “Scrambled Egghead.” By the 60s and early 70s, Wilson had left academic subjects behind to focus on the Occult, in books like The Occult: A History (1971), Aleister Crowley: The Nature of the Beast (1987), and biographies of other spiritualists. Wilson became an active member of the Ghost Club and began to seriously explore topics such as telepathy, life after death, and the existence of spirits in his later writing.

Wilson’s fiction includes several noted Cthulhu Mythos pieces. The hero of The Return of the Lloigor (1974) discovers the Voynich Manuscript is actually a medieval translation of the Necronomicon; and in the preface to his 1967 novel The Mind Parasites, Wilson wonders “what would have happened if Lovecraft had possessed a private income – enough, say, to allow him to spend his winters in Italy and his summers in Greece or Switzerland?… what he did produce would have been highly polished, without the pulp magazine cliches that disfigure so much of his work.”

In 1985, Poltergeist director Tobe Hooper filmed Wilson’s The Space Vampires as Lifeforce. Wilson hated the film version (so did a lot of people), but it’s cheesy fun, as Leonard Maltin happily reported in his review for Entertainment Tonight.

Colin Wilson was a tireless writer; his last two books, Super Consciousness and Existential Criticism: Selected Book Reviews, appeared in 2009. He suffered a stroke in June of last year, losing the ability to speak. He died on December 5th in Cornwall, at the age of 82.

Wilson edited a few large true crime collections. He also wrote the most ‘non-endorsing’ introduction to a book I’ve ever seen: Richard Wallace’s ‘Jack the Ripper: Light Hearted Friend’ (Lewis Carrol of Alice in Wonderland Fame is his Ripper. Rubbish). Wilson basically said, “Well, anybody can write anything they want and I’m getting paid for this introduction..”

If it wasn’t for him, I never would have known the glory that is Mathilda May’s breasts.

I saw Wilson’s name show up a few times in the anthology section of the mystery department, but I’m not familiar with much of what he produced. I do wish I had a copy of the Pocket edition of The SPACE VAMPIRES though — I love that cover.

I will never (ever) forget Mathilda May’s breasts, or her various nude scenes in LIFEFORCE.

How could anyone be so naked and so evil? It boggled my 21-year-old mind.

Interesting character. I’ve never read any of his fiction, but a good deal of his occult-related non-fiction (and perhaps “non” should be put in quotations, for the benefit of those who would consider that subject matter equally fictitious).

I found that he asked many of the same questions I ask, was intrigued by many of the world’s mysteries, and sometimes came to strange, fascinating conclusions. I don’t know if I believe in his concept of “Faculty X,” but I think it would be cool if it did exist and we did, indeed, have hidden mental powers into which some of us could tap. He struck me as sometimes being too gullible (much like Arthur Conan Doyle), being taken in by some folks who undoubtedly were charlatans (like spoon-bender Uri Geller). I hope he was right in coming to the conclusion that there is an afterlife…and now he knows.

@e.e. and John: There are many things to recommend Life Force, as you noted, two in particular.

I agree with Leonard Maltin’s assessment that it is cheesy fun (the sort of pic that rewards an MST3K-style viewing with friends). There are also some visually stand-out scenes, like the disturbing vampire torso that animates on the lab table and starts convulsing, the stub of its spinal cord whipping around like a tail. I saw the film as a teen, and decades later that scene was still lodged in my brain. Then there are all the scenes, of course, well, you guys have already alluded to those…