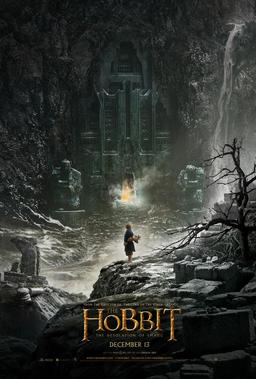 Let me begin with a confession: I’m an unabashed Tolkien fan. Since the first time I read The Hobbit as a wee lad, I’ve been hooked. When The Lord of the Rings movies came out a few years back (which I loved), my next question was, “When is Peter Jackson going to make The Hobbit?”

Finally, after legal battles and years of waiting, we got the first installment, The Unexpected Journey.

While I’m in the confessional mood, I’ll add that I wasn’t completely sure about the decision to split the book into three movies. After all, Mr. Jackson & Company did a pretty good job capturing the entire LoTR trilogy in three films. Why do they need the same amount of time to cover a single book? However, I had faith that the films’ creators knew what they were doing. Now, with the second movie about to be released, I’ve been ruminating about what I’ve seen so far.

What I desired most from The Hobbit movie(s) was to be transported back to the lush, mythic realm that had been created in the LoTR movies. And I got it in spades. Jackson even includes some scenes with Frodo and “old” Bilbo that serve as both a framing device and an introduction to the LoTR movies.

The movie also adds a bit of background to the story, showing how Smaug came to the mountain and evicted the dwarves. Usually, these kinds of pre-story narratives don’t interest me, but this one was so well-done that I didn’t mind. It actually gives us a brief glimpse of the dragon upfront and, in a stroke of genius, introduces the Arkenstone, which plays a big part at the end of the story, but which the book doesn’t explain much.

Once the actual story begins, I was locked in. (*cue tractor-beam sound*) The first thing that struck me was how cool and different the dwarves were. In the novel, the dwarves are portrayed as… well… buffoons. The movie included plenty of comic-relief, but it also gave us dwarves with more diverse personalities. The dinner party scene was just as fun and raucous as it is in my head when I read the book. It was also a nice touch how Gandalf attempts to convince Bilbo to go on the quest at the same time Balin is trying to talk Thorin out of it.

Now one of the things Team Jackson had to do when he decided to split up the book into three parts was provide a dramatic arc for each movie. Obviously, what they decided to do for the first film was expand the role of Thorin’s nemesis, Azog the Defiler (the pale orc). Instead of the company being pursued by generic orcs, this movie makes it more personal. The first time I saw the movie, I wasn’t too keen on this. I felt like it had been shoehorned into the existing plot. Yet on a second viewing, I found myself accepting and even enjoying the decision. We all knew additional material was going to be added to the story and this decision makes perfect sense. Not just for the movie plot, but for the character of Thorin Oakenshield. Like I said, I love, love, love Tolkien, but character development wasn’t his strong suit. This movie updates the story while still remaining true to the spirit of the original work. 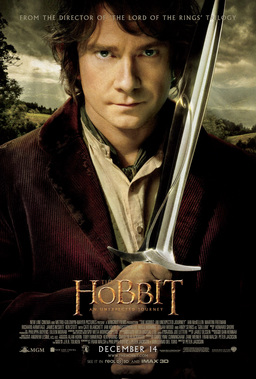 The encounter with the trolls was amusing. I found myself chuckling several times and I was also impressed. These dwarves can fight! One of the things that always bothered me about the book was that the dwarves just bumbled into one catastrophe after another, getting captured and/or chased until Bilbo saved them. However, the dwarves of the movie — while often comical — know how to defend themselves. A very welcome change.

The company’s arrival at Rivendell gave us another glimpse into the “bigger story,” setting up the events of LoTR with the council of Elrond, Gandalf, Galadriel, and Saruman. It’s also a great scene because it gives us a logical reason (besides altruism) for why Gandalf is helping Thorin take back his mountain — he fears that the Enemy is stirring again and a dragon like Smaug could be a powerful weapon, thus it must be eliminated.

Another part I really enjoyed was when the company was captured by goblins in the mountains. This was always one of my favorite parts of the book. Not only because Bilbo finds Gollum and the Ring, but because the series of events underlined the key elements of heroic fiction: adventure, danger, loss, and salvation.

However, I didn’t love everything. I won’t mince words: I loathed the portrayal of Radagast. The Brown wizard is only mentioned by name in the LoTR saga (and sparingly at that), but I always pictured him to be a stoic version of Gandalf, a mysterious hermit who fought evil in the wilds of Middle-Earth. Instead, we’re given a bumbling, hippy-dippy oaf who rides a sled pulled by wild rabbits. Egads, another Jar-Jar Binks character! I sincerely hope we see a lot less of Radagast in the next two movies (none at all would be my preference.)

On the other hand, the set of Dol Guldur kicked ass. I especially enjoyed the appearances of the ringwraith and “the necromancer” in the doorway. Our heroes survive another attack by Azog, thanks to Gandalf and Bilbo, and then escape with the help of giant eagles. And, of course, the movie ends with a shot of Smaug’s eye opening.

As I’m sure you can tell, I really enjoyed this movie and I’m eagerly anticipating the next installment. Actually, I can’t wait until all three Hobbit movies are released on dvd so I can watch them and the LoTR movies in succession, all in extended versions.

My personal theory: Radagast (the movie version) emigrated from Discworld.

Have you seen the extended Hobbit yet? I didn’t think it was quite as transformational as the extended LotR movies, but I did enjoy the additions.

I also appreciate the need to make all of the Dwarves visually distinct, but I still really question some of their specific choices. But that’s just me being snotty. I also can’t wait for movies 2 and 3.

Although I swore not to watch the first film out of deference to the book, I ended up doing so in a friend’s house. I have to say I enjoyed it. That said, it’s best approached as an entirely different beast from the book itself. The original book was a series of discrete chapters and the emphasis was very much on Bilbo’s evolution as a character with the dwarfs essentially providing comic relief. It was also permeated by a certain black humour.

Jackson’s film is best seen as a prequel to LOTR. Jackson has established a common thread to what was originally an episodic book (ie, Sauron) and the focus is on Thorin as a sort of mini-aragorn, with Bilbo playing a far more peripheral role. Funny it ain’t. I guess Jackson had a choice: produce something true to the spirit of the original book or produce something true to LOTR the film (ie, milk the franchise) and he chose the latter.

While not a huge fan of LOTR (a lot of it seems choppy and chaotic on second viewing) Jackson was always capable of introducing something that was entirely his own. Here it’s Smaug – Smaug clumping into the dwarf’s mountain stronghold, casually crushing dwarfs underfoot; Smaug sleeping deep beneath all those golden coins (like an alligator, lurking in the water) – only to surface before the final credits. Nice.

I agree that the book and movie versions of any work are very much different. Movies give the opportunity for richer visualization (my imagination is good but I don’t go so far as what embroidery a culture would use, if at all), while the book gives opportunity for insight into characters’ minds. I’ve always enjoyed comparing the two to be honest, if only to be able to understand were one was expressing an idea well or poorly. I’ve been pleased so far with Jackson’s Hobbit tweaks to get better character threads. I too was disappointed with Radagast in the film as well at first; this was tempered somewhat because Radagast’s ‘hippy-dippy’ (good description!) personality is all Saruman needs to dismiss Gandalf’s warning, enough to remain skeptical even in the face of the recovered enemy blade. Part of me hopes that any of Radagast we see will actually firm up the character- that he only plays the fool and reveals himself as much more capable when the chips are down. I am the most nervous of the introduction of Tauriel/Legolas thread- Jackson has his reasons, and we’ll all get to see how much we agree or not with them.

I enjoyed the opening of The Hobbit, but that’s it. After that it was a long chase, a sort of Indiana Jones and the Temple of Goblins. Jeopardy without real stakes is dull, always was, always will be, and for most of those (pointless) chases, that’s all the movie had to offer.

When it slowed down, for Gollum, and so on, it was better.

A tough book to adapt, surely, in that Tolkien shifted, in the writing, from producing a children’s tale to a weighty meditation on greed and alliance.

I hope to skip the next installments, if my kids will let me.

I am constantly amazed (I guess I shouldn’t be by this point) by the thoughtfulness and insight of the replies on this site. Black Gate Readers — you rule.