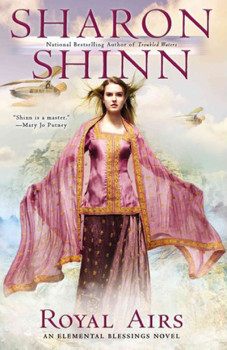 First of all, I love getting snail mail. Postcards are great, letters are better — but best of all is a lumpy Manila package with something mysterious inside of it.

But when I came home to see my mailbox was stuffed full of a Manila envelope from Sharon Shinn, there was no mystery.

There was only a short squeal and a jig. I knew what awaited me. I bounded up the stairs to the third floor, reciting all the while:

(I mean, I thought she rocked long before I met her, but after John O’Neill introduced us at one of those World Fantasy breakfasts where you can’t believe you’re eating pancakes with a woman whose books you devour regularly, she rocked about a thousand times more.)

Royal Airs is the second in the “Elemental Blessings” series, which take place in the Kingdom of Chialto. It’s an exciting time in this secondary world, with “smoker cars” taking over for horse-drawn carriages, the blushing dawn of flying machines, alliances forming and falling apart with realms across the mountains and seas, the delicate balance of power between the regent, the primes of the Five Houses, and the heirs to the throne.

All of this and magic too!

The plot mainly concerns Princess Josetta, finding a place for herself in her post-courtier life running a shelter in the city slums, and rakish card shark Rafe Adova, who has problems of his own. For one, people keep trying to kill him. For another, he’s discovering it’s high time he grew up and did something more interesting with his life than cheating people at games. He likes risk. He likes flight. He’s got (as Tom Wolfe might put it) The Right Stuff.

And, see, Josetta’s got this friend who owns an aeromotive factory…

But I digress. Spoilers, darling. 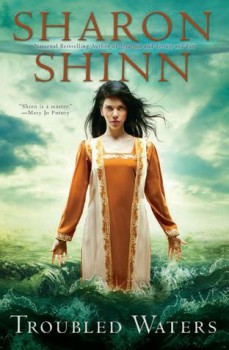 I wrote about the first book in the series, Troubled Waters, two years ago, and of course once I was finished with Royal Airs, I had to go back and reread the first one.

The trouble is, my mother’d got there before me.

Therefore, after I read Royal Airs, I had to wait to reread Troubled Waters (which naturally I was chomping at the bit to do) because she had to finish it, and then I had to wait until she was finished with Royal Airs before I got to talk to her about it, and then all she would do was look at me wistfully and ask what was going to happen next.

“Um… Corine gets an adventure?” I guessed, naming one of the characters whose story threads unravel into a gleaming horizon.

“Do you know that for sure?”

“No! She hasn’t written the third book yet.”

As if Sharon Shinn’s books were equivalent with Downton Abbey!

Well, personally, I like Sharon’s books better. Although Maggie Smith will always have a place in my mental Dramatis Personae. Perhaps that sensible, hard-headed Empress at the end.