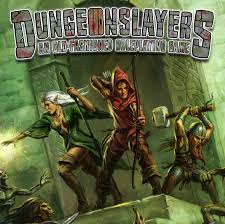 I’ve fallen for two game products I never expected to like. One is a slim paperback rule system for a fantasy role-playing game – and you might think we have enough of those, but this is pretty excellent. The other initially puzzled me because it seemed on first blush like it was a Victorian murder mystery… except that I discovered it more resembled The Prisoner.

The products have very little in common, except that they come from the same publisher and that I highly recommend them both.

All that you need to play Dungeonslayers – apart from dice, paper, pencil, and imagination – can be found in a slim 160 page paperback. I suppose a lot of role-playing games can make a similar claim, and it’s one I’ve heard often enough that upon first look I really didn’t see what the big deal was. But Dungeonslayers really is a different animal.

It’s beautifully presented and succinctly explained. There’s no bloat here, and there’s nothing confusing. It’s minimalist without being simplistic, and incredibly succinct. You can get the game up and running with a minimum of fuss.

There aren’t that many original ideas in the system – although I do love the to-hit roll combined with a damage roll – but it gets great mileage out of the old ideas it employs in newer ways. Everything is clear and simple, enough that the basic rules take up little more than twenty pages. As characters rise in experience, they can be customized with new talents, or improve existing ones, and these take up another small chunk of the book, although they are summarized in easy-to-find tables.

Those tables, and the organization, are a great deal of the charm of Dungeonslayers. Everything is easy to find. Rolling up a team of characters in this particular role-playing game isn’t going to take more than a few minutes, and there’s a decent little section on monsters and adventuring besides.

Reviewers have described the previous editions as a beer and pretzel game, but I honestly think Dungeonslayers has a lot more staying power than that. And it has a huge fan base online, one that regularly creates new, free expansions.

Dungeonslayers, by Christian Kennig, is published by Chronicle City and clocks in at 160 pages. Physical copies are $24.99, and PDFs are free. That’s right, free. But you want a physical copy, trust me. Anyway, you can get them both here. And don’t forget that free add-ons mentioned earlier in the review. 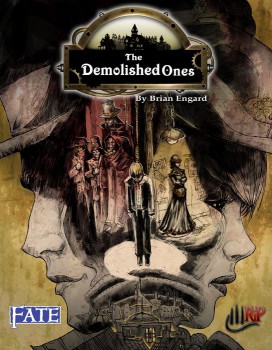 Don’t be scared off by the FATE system required to play. You don’t need a separate FATE book, because all the rules you need are included within. And don’t think that you’ll be dropping everything to start a vast new campaign. What you’ll have in The Demolished Ones is a short, mindbending adventure that will take up several gaming sessions and leave you and your players talking for a while to come.

In some ways The Demolished Ones harkens back to those “hosting a murder” parties that were popular a few decades back, except that in the module, everyone begins the game not having much left of their memory, so they’re not starting with assigned roles. They waken in a room with a murdered man, and no identity, and little idea what’s going on. As the rest of the adventure plays out, they’ll unravel a series of mysteries and experience peculiar and even horrifying events… ye gods, I really don’t want to give anything away on this one. It’s just really cool! Trust me. You’re in for a grand time. If you don’t believe me, search the net for further information and you’ll see I’m not alone in my high assessment – or in my desire to avoid spoilers. Don’t miss it.

[…] and Dark, a new RPG of gritty science fiction horror from Chronicle City – publishers of Dungeonslayers, Achtung! Cthulhu, and the upcoming Punktown– which draws inspiration from Pitch Black, Dead […]