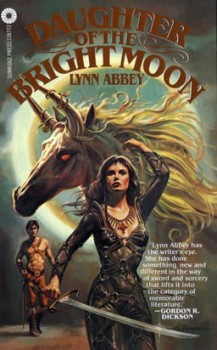 Daughter of the Bright Moon (1979) by Lynn Abbey has been sitting on my swords & sorcery to-be-read pile for a long time. One of the main goals I set for myself when I started blogging was to read all the classic era S&S I could. Not only does DotBM date from S&S’s golden age in the 1970s, its hero, Rifkind, is one of the earlier sword-swinging women. This was a book that demanded a look.

Even with all that going for it, I didn’t get to it until last week. Every now and then, I felt like it was staring at me, admonishing me for not having read it already. I mean, I’ve known about it since I read a fun write-up on Rifkind in the Giants in the Earth column in Dragon Magazine #57 and my dad actually had a copy in the attic.

I even started it last year, but stopped after a chapter or two. I don’t know why… I liked it, but maybe something shiny caught my eye.

Warrior women characters have been around forever. There are the myths of the Amazons and the valkyrie. In real life, of course, there was Joan of Arc.

Jirel of Joiry was the first swordswoman to star in her own stories. C. L. Moore created her kick-ass French noblewoman in 1934, but for decades after that you really had to dig to find fighting women as the lead protagonists. 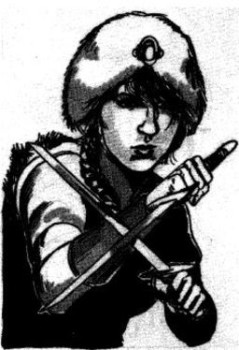 S&S was written mostly by men and for men until the 1970s. Spurred by feminism and an expanding readership, the ranks of fictional swordswomen swelled. Of course, there was the ludicrously armored and overinflated Red Sonja from Marvel, but there was also C. J. Cherryh’s sword & planet protagonist, Morgaine.

In the same year as DotBM, Amazons!, edited by Jessica Amanda Salmonson, introduced Charles Saunders’ Dossouye, Janrae Frank’s Chimquar the Lionhawk, and Megan Lindholm’s Ki and Vandien. Fighting women were appearing all over.

Daughter of the Bright Moon, Abbey’s first novel, introduces Rifkind, a nineteen-year-old healer and warrior from the scorched Asheeran wastelands. We meet her as she discovers the ruins of her tribe and her family. She had been an outcast of the Asheeran people, fierce nomadic raiders with a typical warrior-man/servant-woman society.

Rifkind had worked to fight and ride as well as any of her brothers, and with personal drive and hard training she had become a deadly combatant. Driven from her tribe by fear and jealousy, she went to train with the healer, Muroa. There she was sworn to the service of the Bright One, the tribe’s moon goddess. 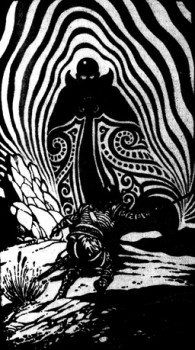 Muroa, the lone survivor of their tribe, tells Rifkind that the Bright One has placed a destiny on her and she must leave the wastelands. Her pupil’s future doesn’t include seeking some sort of suicidal revenge on her clan’s destroyers, but lies out in the Wet Lands, the kingdom of Dro Daria.

On her journey to Dro Daria, she is threatened by an apparition demanding the ruby that once belonged to her mother and which Rifkind now wears around her neck. With skill and luck, Rifkind drives the dark figure off for the time being.

After days of traveling, Rifkind arrives in the the so-called Wet Lands. The chapters about her adjustment to a land where all the citizens know the Asheeran people to be vicious marauders and water falls from the sky in great sheets, are some of the book’s best. Self contained, that section could stand on its own as a short story. Coming from a society where violence is direct and common, she’s unprepared for the day to day white lies and misdirection common to “civilized” peoples’ interactions. 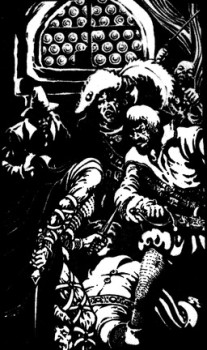 Quickly, political forces in Dro Daria attempt to convince Rifkind to ally herself with them in a struggle against the powers trying to overthrow the king. These powers are backed by the sorcerer, An-Soren. In a land where most wizards are charlatans, Rifkind’s genuine powers may be able to turn the tide. For reasons of her own, she agrees.

And that’s pretty much the plot. Young barbarian encounters civilization, gets caught up in local politics, fights with wizard. Nothing anyone hasn’t seen before or since. Abbey’s writing is nothing spectacular, instead being solidly workmanlike. I found some of her stylistic choices  jarring. When everyone’s named something like Rifkind or Ejord and then along came a Humphry, I was instantly transported from Dro Daria to the set of Are You Being Served? and I really don’t want that to ever happen again.

There are many good things about Daughter of the Bright Moon, first and foremost the character of Rifkind. An outsider, she serves perfectly as the point-of-view character for the reader to discover the climate, the customs, and the political machinations of Dro Daria, and her reactions to this alien world are believable and well presented. Unlike too many S&S heroes, she isn’t unbelievably powerful. To overcome bigger and stronger men, she’s forced to outthink them. This adds extra excitement and interest to the several extended action pieces.

Rifkind also changes over the course of the novel. The various people and powers she confronts force her to reexamine her beliefs and her gut reactions. Never once did I feel like yelling at Rifkind or Abbey for some unrealistic or uncharacteristic action. 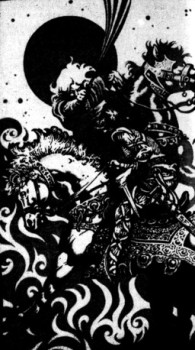 All of the characters and plot development are well done (except for some of those names). I particularly like the cannibalistic Mountain Men and the mystery of the Old Gods. The passages dealing with Rifkind’s childhood and adolescence as she asserts herself and learns combat are compelling. The political maneuvering is complex enough to not be boring, yet kept simple enough that a scorecard isn’t needed to keep track of things. There’s a lot to be said for the short length of older fantasy novels.

Finally, the book is filled with black-and-white illustrations by Steve Fabian, a few of which I’ve included here. They do a much better job than the cover does of depicting the tough teenager from the novel. Several S&S books from the 70s and early 80s were provided with similar pictures and I miss them. For me, they’re a link back to the well-illustrated pulp magazines.

DotBM is a solid B of a book. For me, that’s a book that delivers what it claims to and in a way that doesn’t make me feel dumb or cheated. Think of a B as the floor below which no book should fall in terms of competence or art. Any of Lin Carter’s Thongor novels is a C or D, while Michael Moorcock’s Stormbringer is an A. I’m not always going to bring back A books from my excursions into S&S’s back catalogue. Sometimes a book isn’t earth-shatteringly great or forging a new path for the genre. It’s not going to make you reexamine the underpinnings of heroic fantasy. Sometimes it’s just a good, decent read filled with adventure, exotic locales, and characters that pull you in to the writer’s imagination. And most of the time that should be enough.

Daughter of the Bright Moon and many other fantasy novels are for sale from Lynn’s personal library. For a listing write to 1940ronabbey@gmail.com