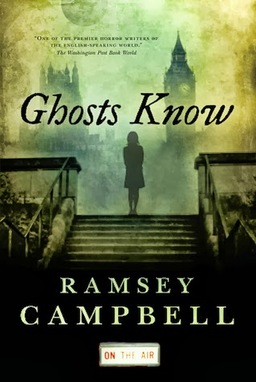 Look at that, it’s October already. And you know that that means, don’t you? It’s spooky reads season, when all the major publishers inundate us with the year’s best creepy fiction.

I like to try new authors every October. Ramsey Campbell is hardly new, but I know him almost exclusively through his short fiction. I’ve been wanting to try one of his novels for years, and this appealing new hardcover from Tor will fit the bill nicely.

Graham Wilde is a contentious, bombastic host of the talk radio program Wilde Card. His job, as he sees it, is to stir the pot, and he is quite good at it, provoking many a heated call with his eccentric and often irrational audience. He invites Frank Jasper, a purported psychic, to come on the program. He firmly believes that the man is a charlatan, albeit a talented one. When Jasper appears on his show, Wilde draws upon personal knowledge about the man to embarrass him on air, using patter similar to that which Jasper utilizes in his act.

Wilde’s attack on Jasper earns him the enmity of his guest and some of the members of his audience. He next encounters Jasper when the psychic is hired by the family of a missing adolescent girl to help them find her. Wilde is stunned and then horrified when Jasper seems to suggest that he might be behind the girl’s disappearance.

Thus begins a nightmarish journey as circumstantial evidence against Wilde begins to mount, alienating his listeners, the radio station, and eventually, his lover. As Wilde descends into a pit of despair, reality and fantasy begin to blur in a kaleidoscope of terror….