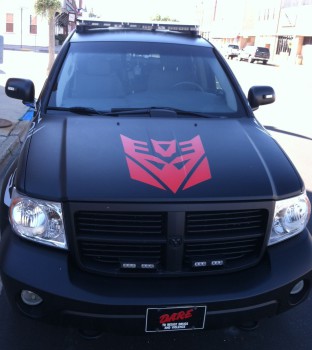 [The transcript that follows is of a voice memo recorded on an iPhone during my commute to work.]

So the local police cruisers in the town where I live recently got a new paint job to make them look like Transformers.

Well, mostly they just look like police SUVs, but on the hood of two is the large silver decal of an Autobot; the third sports a red Decepticon logo. These are quite striking against the black paint.

The first time I saw the Decepticon Dodge Durango squad car, I did a double take just to confirm that it was an actual police vehicle and not some private party’s clever paint job. My first conjecture was that it was the vehicle they use in the D.A.R.E. program, the one they drive when they go to schools in the area, and that they must’ve calculated it would be more cool to the kids.

[Subsequent to my recording these thoughts, I did talk to one of the local police officers. He confirmed that it was done largely to get local youth talking, to help with public relations in providing a bridge to younger residents. He added that many of the people in town over forty have no idea what they are. That may be skewing the demographic for recognition a tad young — I just turned forty-one and I knew what that robot face was right away. The Transformers toys exploded in the early ‘80s, just at the tail end of my toy-playing days. I suspect some older people also recognize the logos either from having been parents of Transformers fanatics or from having seen the recent Hollywood films. This is a rural farm community, though, so I’ve no doubt that many older locals would have no clue what this robot face on the police cruisers is all about.]

One upshot of this is the possibility that in my town you can be pulled over and ticketed by an Autobot (or a Decepticon). Indeed, just prior to beginning this voice memo, I saw that black SUV with the big red Decepticon face coming toward me in the northbound lane and I eased down on the gas a little as I passed him. Not that I was really speeding; I had it on cruise, but I tend to set my cruise control at two-three miles over the speed limit. 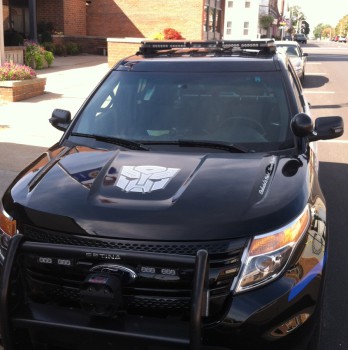 (I’m fairly convinced that my car’s speedometer is calibrated to read a couple miles higher than the speed I’m actually going. This suspicion is based on having used GPS in the vehicle, which tracks your speed via satellite; the GPS always shows the speed I’m traveling as being a couple miles less than the speedometer. This has also been borne out by those checkpoints that have the radar set up to tell you your speed. I’ve noticed this in other vehicles I’ve driven as well, which has made me wonder whether this is not a fairly common phenomenon, perhaps an industry-wide standard to get people, unbeknownst to them, to slow down a little bit — or as a precaution with regard to potential litigation, i.e., if the speedometer is going to be in error, better it be reporting too high than too low. Or maybe it’s just my imagination.)

Anyway, where was I? So I saw that vehicle heading toward me and the thought that went through my head was Here comes the robot truck; I’d better check my speed.

That was the immediate, reactive thought that flashed in my mind. For the briefest fraction of a second it was like I was in a sci-fi movie, like I’d slipped a gear and was in the world of Robocop. 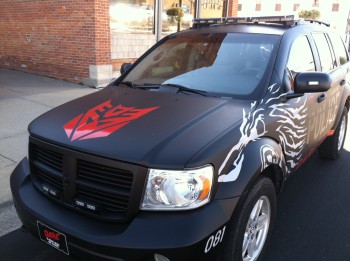 And that’s part, I guess, of having a background in fantasy and science fiction, growing up reading the stories and comic books and watching the films and TV shows: you have this vast framework of reference, so you can look at the world around you and occasionally see it in a slightly different light, in some quirky and sometimes illuminating way. Seeing things in this broader context can sometimes highlight how strange or unusual things can be.

I mean, the fact that I’m right now talking into a little rectangular electronic device in the palm of my hand: obviously I can’t fail to notice I’m doing something that fifty years ago or even fifteen years ago you only would’ve seen someone doing on Star Trek. Back then, this device was far-future science fiction. Now, here, in this one aspect, I am living it: speaking into a handheld device that is a communicator, a camera, a camcorder, a pocket calculator, a mapper, a tracking device, a television, and a computer with full access to the Internet. Smaller than my wallet.

And it’s fun to think of things in this way, to better appreciate their strangeness. In certain situations, I might note that I feel like I am in a Philip K. Dick novel or a David Lynch film.

You know, every generation grows up with technology that, for their parents, was some kind of new, revolutionary, amaaazing breakthrough. But if it has always been there from the time you can remember, it’s just a part of the background; it becomes an ordinary part of the furniture of life.

A TV was that sort of furniture for us: always there, taken for granted. I can only try to get into the head of that person who grew up during the ‘40s and ‘50s, when TV was first introduced into homes, and imagine what it was like to go from a radio, where the normal thing was just to hear voices coming out of a box, to actually seeing a picture, people, movement, on this little screen in your house. It would’ve been just incredible. Of course, the TV was always there from the time I was a toddler.

The things that I saw debut and make tremendous changes in our everyday lives included the introduction of the home computer. Each person having a personal computer? Prior to the 1980’s, that thought was unheard of, except in science fiction. Those who were reading sci-fi were anticipating it, even while board members of some early computer companies could not fathom marketing their product to families for home use. And now, cell phones: just the idea of having a cordless phone and then the idea of having a phone that you took wherever you went, and today, the smart phones, which are on a whole other level again. It is so mind-blowing; nonetheless, it is easy not to be able to step back and see it in that broader historical context, and not to recognize just how mind-blowing it is. Again, for the kids who have grown up with smart phones, it’s just, I don’t know. Can they even imagine what it was like when, not too long ago, these things did not exist (except on Star Trek)?

For them, is imagining that state of affairs like us trying to imagine a time before electricity or refrigeration, the way our great-grandparents might have lived? Having taught college courses within the last decade, I’ve seen a generation emerge for whom their “phone” or their “pad” is an essential part of their socialization: when you ask them to turn the devices off so as to avoid distraction during a lecture, for some it is like you are asking them to disconnect from a part of themselves, to temporarily paralyze a limb or a part of their brain.

Science fiction and fantasy can help us gain perspective, to step out of our world and see it from a more objective distance. We spec-fic fans do that all the time, look at worlds from an outside point of view, which makes it easier for us to adopt that stance when looking at our own world. One might intuitively think that by so doing — by using entertainment to “explore strange new worlds, to seek new life forms and new civilizations, to boldly go where no man has gone before” — we would render the world in which we live particularly boring and mundane by comparison. That does happen sometimes, certainly (you’re sitting in some drab office wishing you were in Middle-Earth: anyone else been there?), but, conversely, the opposite happens.

In being inundated by so many strange worlds, worlds where things are different, we better appreciate the malleability of the reality in which we live. We can turn that detached POV of a visitor’s eyes upon our own world. We can see that this world could have been different, too, and it is no less strange for being the world in which we happen to be. It is a practical benefit, I think, of science fiction and fantasy.

This whole line of thought was prompted by our very own Transformers law-enforcement vehicle, now far behind me on this winding country road. Incidentally, as far as I know, it does not actually transform. But, you know: who knows?

I also believe my spedometer to be about 4 km/h slow.

Those cars are rad!

@chibidani: So I’m not the only one!

They are pretty rad.

[…] What is the Benefit of Science Fiction and Fantasy? […]