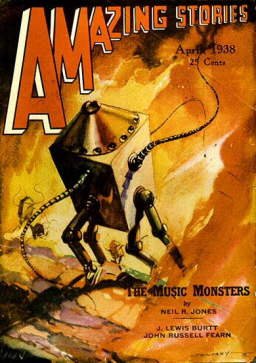 I first ran across Neil R. Jones’s Prof. Jameson stories in junior high while reading Isaac Asimov’s Before the Golden Age — which, by the way, is one of my favorite anthologies.

Neil R. Jones’s first Prof. Jameson adventure appeared in the July 1931 issue of Amazing Stories. In this first story, “The Jameson Satellite,” Mr. Jones gives us all the background information that we’ll ever need to follow this wonderful over-the-top space adventures of Professor Jameson and his Machine Men colleagues, the Zoromes!

Within the first few pages, we learn that Professor Jameson of the 20th century had a horrible revulsion against being buried and subsequently becoming worm food after his death. So, to ease his mind, he arranged to have his body placed in a hermetically sealed rocket after his death and then launched into orbit around the Earth.

Following me so far? Good. So now we skip ahead 40,000,000 years to find the Professor’s orbiting Tupperware bowl still circling a now-dead Earth, which is itself orbiting a dying Sun which has cooled off and become a Red Giant (we now figure that this’ll actually take somewhere around 5 billion years to happen). So far so good? Good!

We then meet a group of intergalactic explorers who are at this very moment investigating our dying solar system. Their sensors pick up a metallic object orbiting the Earth.

Now of course the reader knows immediately what the object actually is. When they finally approach Earth and discover Prof. Challenger’s coffin-ship, they take it aboard their own greatly larger ship.

It turns out that the Zoromes aren’t your run-of-the-mill extra-terrestrial explorers. Nope, they are actually cyborgs! The Zoromes wanted dearly to explore the galaxy, but knew their mortal bodies wouldn’t survive a journey that might entail thousands of years, so they traded flesh and bone for metal and circuitry. Makes sense to me.

Upon discovering the Professor’s mortal remains, our new-found cyborg pals decide that, since the Prof’s corpse is so perfectly preserved, it would be a shame not to install his brain into a brand new “machine-man” body and jump start it. 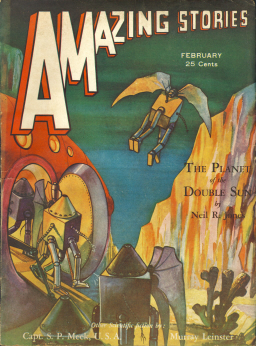 They then go about doing exactly this, reanimating the Professor. He wakes up wondering why he isn’t dead and then slowly catches on that he’s not in his old body anymore. He is only slightly nonplussed about being reanimated in a metal body.

This is how Neil R. Jones described the Zoromes…

The bodies of these queer creatures were square blocks of a metal closely resembling steel, while for appendages; the metal cube was upheld by four jointed legs capable of movement. A set of six tentacles, all metal, like the rest of the body, curved outward from the upper half of the cubic body. Surmounting it was a queer–shaped head rising to a peak in the center and equipped with a circle of eyes all the way around the head. The creatures, with their mechanical eyes equipped with metal shutters, could see in all directions. A single eye pointed directly upward, being situated in the space of the peaked head, resting in a slight depression of the cranium.

I don’t know how you feel, but these have to be the coolest robots — I mean cyborgs — ever described! Simple, but elegant.

The Zoromes explain their mission and purpose to the reanimated Prof and ask him if he would like to join their crew and explore the galaxy with them.

The Professor naturally agrees and the adventure begins. The series became so popular that Amazing ended up publishing twenty-one Jameson adventures between 1931 and 1951. Six more still remain unpublished.

I love these stories. They aren’t the fanciest or best written tales from this era, but they supply tons of entertainment.

At my age, I’m not interested in reading massive multi-volume epics that take weeks to read, with possible years between volumes. I appreciate “economy” and that’s one thing that Mr. Jones gives us. The part of the story I described above takes place in the first 20 pages. That’s the complete set up for a series that ran 20 years. 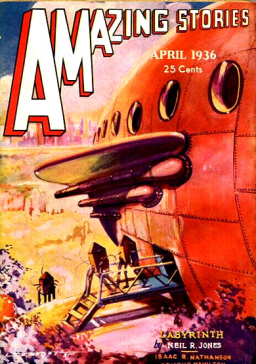 If someone were to write this today, they’d need hundreds of pages just to describe the technology alone. And then how much effort would be spent portraying the psychological and physiological effects of being brought back from the dead and placed in a metal body?

I don’t have time anymore for extremely long, drawn out novels. I’m a meat-and-potatoes kind of guy, and that’s exactly what this series delivers.

Every adventure takes us to another world that’s peopled by its own unique race. In one story they even travel in time. Each of the tales is unique, interesting, and fun.

I love the Zoromes. These guys are kind, helpful, and inquisitive. Plus, if push comes to shove they can also be serious brawlers. Think of them as four-legged, tentacled cans of whup ass just waiting to be opened.

In some stories, they are so seriously outnumbered, they only survive because they had the foresight to keep lots of spare appendages on hand. They can even add wings that allow them to fly.

And as far as being helpful? Think of Daleks rolling around screaming “Assist and Explore!” instead of “Exterminate! Exterminate!”

The only thing that does bother me a little bit is that the Zoromes have given up their names, and have taken on Alpha-numeric designations such as 21MM392 (Professor Jameson’s new name.)

This tends to get confusing at times. 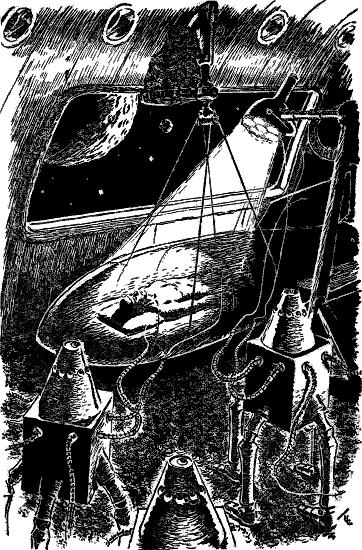 Of the 27 stories (6 unpublished), 16 were reprinted by Ace Books back in the 1960s in five volumes. So yes, if you expend a little bit of effort, you can find those books and enjoy them!

I’ve assembled pics of all five below, so you’ll know what they look like.

Not only do I personally find these stories highly entertaining, but they also have some serious historical value. In Before the Golden Age, Isaac Asimov writes:

And then goes on to say how the Zoromes were the inspiration for his own Positronic Robots.

I think that that’s a pretty good legacy for a series written between 1931 and 1951. Only great storytelling can create such inspiration.

My favorite Jameson adventure was reprinted in the 2nd Ace volume, The Sunless World. It’s titled “Into the Hydrosphere.” The Zoromes discover a world completely covered with water. The planets core is hollow, with a huge floating city in the center. The inhabitants of this world have been enslaved by a race from a neighboring planet within the same solar system.

The Zoromes end up leading a slave revolt. It’s reads like a miniature Doc Savage adventure populated by cyborgs and aliens. It might not be the best written story, but it is a blast!

In closing, I’d like to say that this is a wonderfully fun series that honestly deserves a reprint. So if Mr. Stephen Haffner should happen to be reading this, then all I can say is…

Dedicated to Mike Dooley and Paul Carlson. The two biggest Zoromes I know. 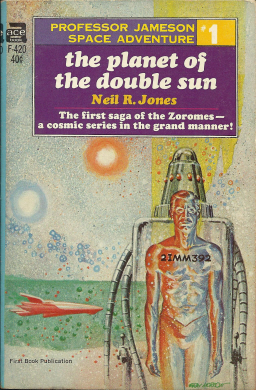 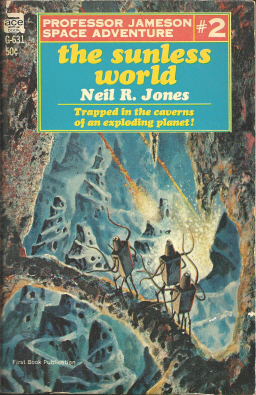 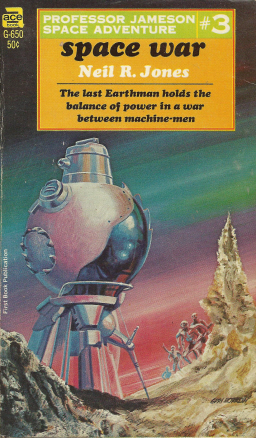 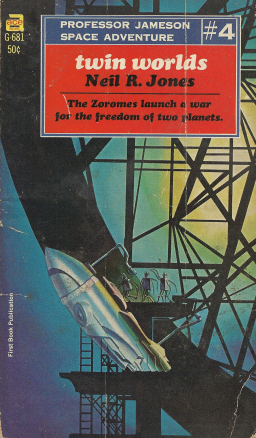 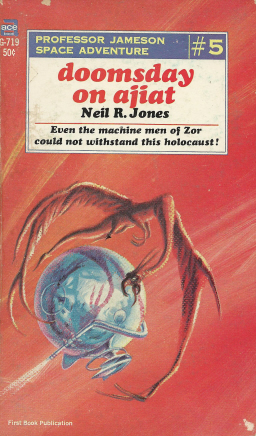 Read “The Shock of the Old,” Thomas Parker’s review of The Professor Jameson Space Adventures, here.

The Pulpsters knew how to create worlds with a minimum of verbiage. They got right to the core of the story and kept things moving. Nice article. But in paragraph six you refer to Prof. Jameson as Professor Challenger!

well.. uhh.. umm. it’s like.. I.. uhh. hmm.
Oh!
I did that on purpose just to see if anyone was actually paying attention!
Congratulations! 😉

Seriously, I screwed that up. thanks for catching it.

[…] Aliens are Delicious: Murray Leinster’s “Proxima Centauri” and the Creepy Side of Pulp SF Professor Jameson’s Space Adventures, or Zoromes Make the Happiest Cyborgs The Best One-Sentence Reviews of Manly Wade Wellman The Beast with Five Fingers by W.F. […]