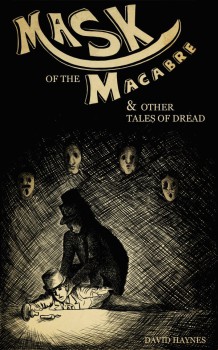 Looking for some new horror, but sick of zombie apocalypses, vampire/werewolf boyfriends, philosophic serial killers, and all those ghost children? Something fresh? Or something that pulls from an older tradition? David Haynes’s Mask of the Macabre is available for ninety-nine cents.

This ebook is broken down into four interconnected stories set in 1860s England. The style borrows more from The Cabinet of Dr. Caligari than Saw or The Walking Dead. The first story in the series, “Mask of the Macabre,” concerns a decadent patron of a decadent theatre whose life is touched unexpectedly by a string of mutilations that predates the Ripper murders by a quarter century. The second story, “Doctor Harvey,” delves into the background of a psychiatrist who has no business judging the sanity of others. “Memento Mori” concerns an early photographer who specializes in capturing the images of the recently deceased, whose latest commission is even grislier than mere corpses. Finally, “A New Costume” wraps up the series, explaining some mysteries of how the three previous stories are inter-connected, as well as leaving hints to future horrors that await those who continue with the series.

This is the first in a series of e-novelettes by David Haynes. If you want to learn more about the author, check out his website.

Michael Penkas has been writing for years. His first collection of stories, Dead Boys, is available through Amazon and Smashwords.