Dragonslayers: From Beowulf to St. George 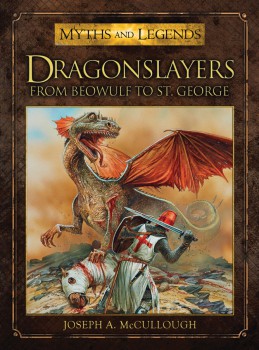 Osprey is justly famous for its Men-at-Arms series. Probably almost everyone who’s a military history buff, historical gamer, or historical fiction writer has at least heard of the series, which illustrates the arms, armor, capabilities and customs of different forces from different eras in extremely well-researched detail. Need to know just how fast the Mongolian cavalry from the era of Genghis Khan moved, or what they ate on the ride? Curious to find out more about the forces from the 2nd Punic war? The Men-at-Arms series is a crucial stop.

Now Osprey is advancing its standard of excellence into new territory. Its Myths and Legends line strives to bring the same sterling level of research to fantasy and myth. Several weeks ago, Osprey sent me the first book of their new series, Dragonslayers.

It’s different from the older Men-At-Arms series books on my shelves in that it’s more profusely and colorfully illustrated, but the information is just as thorough and well presented. I have to admit that I wasn’t initially that curious about the subject matter, but writer Joe McCullough pulled me right in to both the tales I was already familiar with and the sagas of dragonslayers unfamiliar to me, which is no small feat considering how busy I’ve been. It’s pretty impressive that such a small book can pack in so much information, and make it engaging besides.

Dragonslayers covers ancient fighters of serpents and dragons that you might not usually associate with those sorts of tales, like Herakles and Jason (of Argonaut fame). It then moves on to Biblical dragonslayers, famed dragonslayers like Beowulf and St. George, and less familiar individuals like Lord Albrecht Trut and Dobrynya Nikitich. As McCullough says in the introduction, most stories of dragonslayers come from the west, but he covers some fascinating figures from across the world.

In summary, this slim book manages to be a thorough and entertaining look at its subject, and never left this reader suffering from dry reference fatigue. Anyone who has an interest in the slayers of dragons and the historical depiction of dragons and serpents should make space for this book on their shelves.