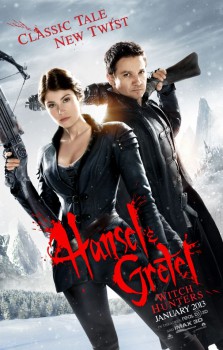 Get ready to put this little morsel under the heading, “You’re Kidding, Right??”

Partially because it is my sworn journalistic commitment to bring you all things scary and partially because of Jeremy Renner, I actually paid full price to sit through Hansel & Gretel: Witch Hunters in its bombastic entirety.  Little did I know when I entered the theater that I really wasn’t getting a private screening due to my Black Gate creds, but was just far more optimistic than the rest of the viewing public by showing up to see it.

I occupied my favorite location in the dead center rows of seats that Saturday night, very much alone as I watched a Pepsi commercial with extremely high production values, yet filled with hope that what I was about to witness would be a reimaging of a well-known tale in the vein of Abraham Lincoln: Vampire Hunter.

Eighty-eight excruciating minutes later I realized I should have bailed after the Pepsi commercial.

Dialog: lame, special effects: marginal, acting: vapid (yes even my beloved Mr. Renner), and plot: so thin you could read War and Peace through it, which would likely be a far better use of your time.

And, by the way, how is that even possible when a good chunk of the story has been in existence since 1812?

It wasn’t until weeks later that I learned Hansel & Gretel cost $50M to make and grossed only $54M in the US, which should have labeled it an unqualified bomb and immediately relegated it to a local RedBox.

But that’s before considering the audiences in what must truly be the global movie wastelands of Brazil, Russia and Mexico.  Because, lo and behold, Hansel and Gretel grossed a whopping $150M more internationally, thanks primarily to those countries.

And though it certainly should be, that isn’t the WTF part. 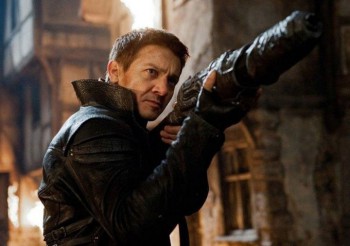 Paramount Pictures and MGM announced plans on Monday to move forward with a sequel.

Yep, you read that right – a sequel – and both companies actually agreed to it.

If that wasn’t enough, insult was added to injury when the announcement went on to say the original production team of Will Ferrell, Adam McKay and Kevin Messick of Gary Sanchez Productions and Beau Flynn are all expected to return to work on what promises be a cinematic masterpiece of biblical proportions.

I do get it; money drives everything in Hollywood regardless of whether the money originates domestically or abroad – but I see no reason to inflict the results on the unsuspecting American theater-goer.  It’s like some sort of twisted guerilla warfare.

But allow me to put it another way: you don’t want to see me dancing to a Britney Spears song in the same way I don’t want Will Ferrell anywhere near my horror movies.

Did you see Hansel & Gretel: Witch Hunters?  If so, what do you think about the current film and its potential spawn?  Post a comment or drop a line to sue@blackgate.com.

The Resident Evil series anyone?

I’m going to go out on a limb here and make the sweeping statement that no matter what the movie makes at the box office, if English beauty Gemma Arterton is in the film, it sucks. She is a perfect three for three on wide-release American action/adventure films:

Well, in both cases at least the boys have eye candy, though the American gents appear to be content to wait for the “On Demand” opportunity – unlike your compatriots abroad.

Their lack of patience is apparently what perpetuates these attrocities…

Gemma Arterton was also in Quantum of Solace. Which could be used to either support or refute Scott’s thesis, depending on how you felt about QoS.

True enough, Joe H, and QoS was certainly the weakest of the three latest Bond films, however, Gemma wasn’t the leading lady of the film, only a supporting character, so I’m not including it.

A fair point. I wonder if some kind of mathematical formula could be derived showing an inverse relationship between amount of Gemma Arterton and quality of end product?

It’s a shame because I want to like her, but then she goes and does both Prince of Persia _and_ Clash of the Titans.

Joe H: I KNOW! I totally want to like her as well. I guess odd beauty will do that to a fella, then again, it’s probably why she keeps getting parts. 🙂

Although Wrath of the Titans demonstrates that while her absence may be necessary, it’s not sufficient to guarantee a good outcome.

Well her next film has Affleck and Timberlake in it, so you know it will be good…

Um. Probably not going to be camping out for tickets for that one.

And to return to the topic at hand: I’ll probably get H&G when it comes out on Netflix. But I’ll be ashamed of it.

I like Prince of Persia, although Arterton has nothing to do with that.

I haven’t seen H&G yet, but I’m sure we’ll get around to it eventually. I was torn by the trailer. “Oh, it’s Renner! Oh, it’s Arterton.”

Sue, I think you identified a disheartening trend when you noted the film could be considered a financial success because “lo and behold, Hansel and Gretel grossed a whopping $150M more internationally”: major Hollywood studios are now much more cognizant of the big picture–how a “blockbuster” film will perform globally. And you’ve heard that old chestnut of dumbing down “to the lowest common denominator”? Well, that denominator’s just gotten lower because the numerator has grown by hundreds of millions of potential new audience members. So plots get simplified and dialogue gets more vapid to make it all “translate” more easily and universally. Or so the argument goes.

What’s so depressing is it’s a lousy argument, and it doesn’t have to be that way. Did Kurosawa dumb down his films for an American audience? Does Miyazaki? How about the break-out Russian film Night Watch or the Swedish import Let the Right One In? Hell, for that matter, did Dostoyevsky or Tolstoy have to be dumbed down so they could be more easily translated? It works the other way, too: the fact that The Avengers had a lot of plot points and some very clever dialogue did not hold it back from becoming the highest-grossing US film of 2012 internationally.

Smart, clever action blockbusters, when they do come along (take last year’s Bond pic), often do well in overseas markets. It is ludicrous that some Hollywood producers calculate, “Well, it was the CGI, the explosions, and the monsters that made them so exportable, so we’ll retain those elements and just drop pesky little concerns like storytelling and dialogue–those people in Russia or Brazil won’t know the difference!” A pox on such craven thinking. Imagine what a good scriptwriter/director like Joss Whedon or Guillermo del Toro could have done with the premise of Hansel & Gretel? The international success of the films of the aforementioned directors illustrates my point: Yes, you can have your cake and eat it too. You can have sexy young actors wielding “kewl” weapons to blow away scary CGI monsters AND deliver a clever, roots-allusive story that people who don’t turn their brain-toggle to the OFF position at the theater entrance can enjoy as well.

Gentlemen, I truly enjoy you commentary and the fact that you have raised the intellectual bar of the film industry to the point where beauty is no excuse for bad movie making, creating what must surely be a cinematic first.

You have restored my faith in the human race…

And now that Nick has said “a pox on such craven thinking,” I require a cigarette… And I do not smoke.

I’ve seen both “The Disappearance of Alice Creed” and “Tamara Drewe”, and they were both quite good, particularly the latter, and Gemma was a fairly good actress in both. So let’s stipulate that Scott Taylor’s rule is only true for “American action/adventure films”, as implied and only supported by the last sentence of his comment. 😉

And if Gemma were to join the cast for the next Pirates of the Caribbean movie (I assume there will be another), that would demonstrate the veracity of awsnyde’s corollary to Scott Taylor’s rule.