“I think it’s pretty cool that crowdfunding allows all the elements of this anthology to come together — a magazine with a history in the space opera community, pro authors who are enjoying a chance to pursue a unique project, and a small press getting a chance to grow alongside a rising editor working with his love of space opera.” – Camille Gooderham-Campbell, Every Day Publishing

I imagine many Black Gate readers came to their love of science fiction and fantasy much like me. I grew up in the ‘70s and ‘80s, when Star Wars was revolutionary, and Star Trek:TOS reruns were bread and butter fare alongside Space: 1999, and Dr. Who. My first speculative fiction novels were mostly tie-ins and Orwell books assigned for school, but soon I discovered Tolkien and Alan Dean Foster and then Robert Silverberg and whole new worlds opened for me. And the stories that most got me excited were the space operas. I loved James Blish’s Star Trek novelizations and then Bradbury’s Martian Chronicles, which led to Asimov and exploration of some Lensman and other pulp stories.

It’s no surprise then that my first novel series, The Saga Of Davi Rhii, was inspired by just such work. When the first book, The Worker Prince, got honorable mention from Barnes & Noble Book Club’s reviewer Paul Goat Allen on his Year’s Best Science Fiction Releases of 2011, I was excited to know that an audience for the sort of space opera I loved still existed.

So much of the science fiction and fantasy I was seeing was nihilistic, featuring protagonists that were not only damaged, but not even very heroic. The stories themselves were not hopeful, but depressing. I see so much nihilism in the culture around me that I like my speculative fiction to be an escape. Not that I can’t tolerate a few exceptions at times, but yeah, I’ll admit, I like when the good guys win, and I like to know who the good guys are. 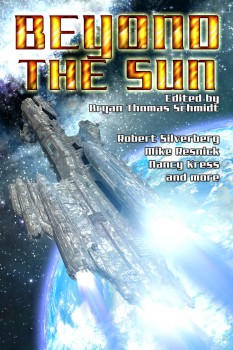 As I traveled to cons and bookstores and spoke with people about my books, I discovered many fans who longed for good old stories they could share with their kids. Something they could both read and talk about. And something that captured that sense of hope and wonder and inspiration they found many stories lacking today.

The success of The Worker Prince, and then its sequel, The Returning, spurred me to look for others who were writing about similar heroes. I found Howard Andrew Jones and his Desert Of Souls, and Saladin Ahmed and his Throne of the Crescent Moon, and then Leviathan Wakes by James S. A. Corey and a whole bunch of cool but little seen fiction on a magazine called Ray Gun Revival.

Ray Gun Revival went under, sadly, but the authors and their stories stayed with me, and then I got the chance to work with Every Day Publishing, publisher of RGR, on something space opera-like. They’d seen my success with two anthologies, including the Kickstarter Beyond The Sun (Fairwood Press, July 2013), and they wanted to take it to the next level, offering pulp style tales by their lesser known up and coming authors alongside stories by top names, so they asked me to create an anthology.

Raygun Chronicles was born. I went to Kristine Kathryn Rusch and Mike Resnick, who had already worked with me on prior anthologies, and then Kris’s husband Dean Wesley Smith, A.C. Crispin, Robin Wayne Bailey, Seanan McGuire, Allen Steele, Brenda Cooper, and Sarah A. Hoyt. I recruited two successful new writers as well and added their stories to the top reprints I selected from RGR’s archives. That made 23 stories, contemporary but with a classic feel. Family friendly, at least PG or lower in rating. And we set about launching our Kickstarter.

Kickstarters are hard. It’s a challenge to spread the word without coming off as annoying. People also want to commit when they’re sure a project will succeed, so they say “I’ll do it tomorrow” or “I’ll check back later” and momentum falters. This same attitude afflicts authors as well. We had a PR firm back out just as we launched and that was a blow, so here I am doing my best to spread the word without a PR plan (not the best way to do it) and asking Black Gate readers to give us a look. We have awesome prizes from copies of the book (in ebook, paperback, and hardback) to t-shirts, tuckerization, even a trip to OryCon. We had our second best week last week and added over $900 in pledges, but we still need to average $464 a day to fund. That’s not a whole lot when you think about it.

For only $5, you can get a great set of stories and support up and coming authors who love and write the kinds of stories you love. This is a way to show there’s an audience for them and create more exposure, and get a great book. Pledging to Kickstarter is basically like preordering.  We even have a great video you can watch that demonstrates the style we’re going for. It includes a raygun prop to die for!

Whatever the case, we hope you’ll take a moment to check us out. In addition to the writers above, we have stories from Shaun Farrell, Lou Antonelli, Michael Merriam, Milo James Fowler, Paula Stiles, TM Hunter, Jennifer Campbell-Hicks, Michael S. Roberts, AM Roelke, Robert Macebo, AM Stickel and Jenny Schwartz. That’s 12 female writers and 11 male, a reverse from pulp days that I think is pretty neat.

If you want to see more stories like the ones I’m describing, please check out Raygun Chronicles here.

For Every Day Publishing’s press release and links to more interviews, including podcasts, click here.