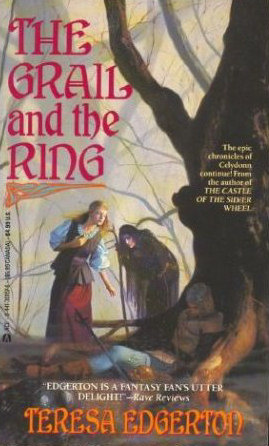 I’ve never read anything by Teresa Edgerton, but I found myself very intrigued by Matthew David Surridge’s thoughtful review of Goblin Moon last month. You can read the whole thing here, but it was this paragraph that really hooked me:

You could call it steampunk, if you’re broadminded. Personally I feel that it’s something in-between steampunk and medieval fantasy; it’s not quite a fantasy of manners, but close. As I said, it’s a fantasy of the eighteenth century, and revels in the weirdness of that specific era. You can find analogues here for the Hell-fire Club and the Freemasons, you can find alchemists and coffee-houses, you can find apothecaries and fairy godmothers out of some salon fairy tale. It’s a brilliant re-imagining of the pre-Romantic era.

Since I’m a collector, my first reaction was to scurry to my bookshelves and dig around behind all the Harlan Ellison and David Eddings to see if I had a paperback copy. I did — but precious little else by Teresa Edgerton. Since Matthew casually mentioned no less than 10 other fantasy novels, this was dismaying. This is exactly why other collectors always pick on me, and choose me last for dodgeball. I suck.

But it is for this very reason that God invented the Internet, and then flooded it with cheap paperbacks. Less than 48 hours later, I found a virtually complete set of unread Teresa Edgerton fantasy novels online, priced at 14 bucks — less than half the original cover price. Thanks, God. You’re all right.

So now I have a set of beautiful Teresa Edgerton paperbacks, and can hold my head high around my fellow collectors. And they really are beautiful (the paperbacks — not the collectors. Seriously, not the collectors). According to Matthew, Edgerton began her illustrious career with The Celydonn Trilogy of alchemical fantasies: Child of Saturn, The Moon in Hiding, and The Work of the Sun. Goblin Moon and its sequel The Gnome’s Engine were released in the early 90s, followed by a second Celydonn trilogy: The Castle of the Silver Wheel, The Grail and the Ring, and The Moon and the Thorn in 1995.

It would probably make sense to start my reading with Child of Saturn or The Castle of the Silver Wheel, but I decided to open with The Grail and the Ring. Because just check out that Dorian Vallejo cover — a witch, a beautiful maiden, a spooky wood, and a fallen knight with arrows and stuff sticking out of him. You know that’s the one gonna keep me up late.

The Grail and the Ring was published by Ace Books in January 1994. It is 316 pages with an original cover price of $4.99. There is no digital edition, but Amazon recently released a Kindle version of Goblin Moon, so stay tuned.

Do please report back on your findings. Reading time, or time to concentrate on anything, is rare and precious for me now, but for especially awesome new finds, I can always scrimp on sleep and binge on caffeine for a few days. Edgerton sounds like she might be worth it.

Will do. Although it took me two weeks just to decide which one to read… indecisiveness is the bane of the collector!