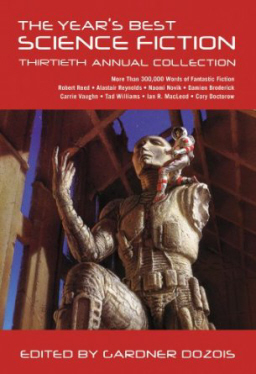 The following is a Science Fiction and Fantasy Writer’s Chat (SFFWRTCHT) special for Black Gate.

For the first time, I was able to gather four of the Year’s Best editors to chat about genre, how they do what they do, why and more. So here are Ellen Datlow, Paula Guran, Rich Horton, and Gardner Dozois.

SFFWRTCHT: Where’d your interest in SFF come from?

Ellen Datlow: I was reading everything in my parents’ apartment from a very young age. I encountered Bullfinch’s Mythology, The Odyssey, the stories of Guy de Maupassant and Nathaniel Hawthorne. I read all the comic books in my father’s luncheonette, including the ones with ichor on the covers.

Paula Guran: I devoured books of all kinds growing up. Loved mythology and fairy tales. Probably encountered supernatural tales first from an old treasury of American folktales of my father’s and science fiction specifically with Podkayne Of Mars. Although I still read all sorts of material, SF/F became a portion of my reading thanks to my older cousin. She made up SF stories and illustrated them herself — sort of an oral graphic novel – and told them to her younger sister and me.

I also read comic books: Wonder Woman, Green Lantern, Aquaman, and Justice League were some of my favorites.

END_OF_DOCUMENT_TOKEN_TO_BE_REPLACED

“I think it’s pretty cool that crowdfunding allows all the elements of this anthology to come together — a magazine with a history in the space opera community, pro authors who are enjoying a chance to pursue a unique project, and a small press getting a chance to grow alongside a rising editor working with his love of space opera.” – Camille Gooderham-Campbell, Every Day Publishing

I imagine many Black Gate readers came to their love of science fiction and fantasy much like me. I grew up in the ‘70s and ‘80s, when Star Wars was revolutionary, and Star Trek:TOS reruns were bread and butter fare alongside Space: 1999, and Dr. Who. My first speculative fiction novels were mostly tie-ins and Orwell books assigned for school, but soon I discovered Tolkien and Alan Dean Foster and then Robert Silverberg and whole new worlds opened for me. And the stories that most got me excited were the space operas. I loved James Blish’s Star Trek novelizations and then Bradbury’s Martian Chronicles, which led to Asimov and exploration of some Lensman and other pulp stories.

It’s no surprise then that my first novel series, The Saga Of Davi Rhii, was inspired by just such work. When the first book, The Worker Prince, got honorable mention from Barnes & Noble Book Club’s reviewer Paul Goat Allen on his Year’s Best Science Fiction Releases of 2011, I was excited to know that an audience for the sort of space opera I loved still existed.

So much of the science fiction and fantasy I was seeing was nihilistic, featuring protagonists that were not only damaged, but not even very heroic. The stories themselves were not hopeful, but depressing. I see so much nihilism in the culture around me that I like my speculative fiction to be an escape. Not that I can’t tolerate a few exceptions at times, but yeah, I’ll admit, I like when the good guys win, and I like to know who the good guys are.